Powering ships with displacements ranging from just over 200 tons to the planned 53,000-ton AOE-6 combat support ships, the LM2500 has been selected by 15 international navies, as well as the U.S. Navy itself. More than 500 LM2500s will be fitted on 223 ships in 28 navy ship programs.

This year, the smaller LM500, rated at 6,000 hp, was selected by the Royal Danish Navy to power its new Standard Flex 300 ships. The installation of the LM500s in the Standard Flex 300s not only marks the company's first installation in a mine countermeasure ship, but also in a naval combatant as well. It is also said to be the first LM engine in a combined diesel and gas turbine (CODAG) propulsion system. The power turbine of the LM500 will drive a fixed-pitch propeller directly through a reduction gear, saving weight by eliminating an enginemounted epicyclic gearbox. Some of the design features that make the LM500 attractive to marine and industrial operators include: the highest efficiency in its power class; the use of corrosion-resistant materials; borescope inspection ports for reduced maintenance; a variable stator compressor for good stall margin and an operational envelope from -54°C to 54°C; and reliability.

In addition to the Standard Flex 300, the LM500 is said to be ideal for patrol boats in the 100- to 300- ton range, and is excellent for aircushion vehicles, fast-attack craft and vessels such as the Italian Navy Spaviera Class hydrofoil, where higher power density, weight and size are at a premium.

In the fall of this year, the LM1600 simple cycle gas generator was added to the expanding General Electric LM family of advanced aeroderivative gas turbines. This new entry was derived from the highly respected F404 aircraft engine which powers the Navy's F/A- 18.

The LM1600's introductory rating is 19,000 isentropic gas hp with an overall gas generator thermal efficiency of 40.2 percent. Incorporating the F404's simple design and reliability, the LM1600 features one of the best fuel efficiencies in its power class. Its extremely high power density enables the engine to produce the same power output with an airflow of 100 pounds per second (pps) as did earlier engines with airflows of 125 to 145 pps. The fuelefficient LM1600's size is said to make it ideal for industrial mechanical drive, power generation and ship propulsion.

The LM1600 Intercooled Regenerative engine is being studied in a development program funded by the U.S. Navy as a major candidate for the next generation naval engine.

Requirements for this engine include delivery of 24,000 bhp at 100°F, while consuming 30 percent less fuel and fitting into the same space as the current LM2500s.

One of the direct results of this development will be a gas turbine engine which can effectively match diesel fuel consumption over a wide range of power output. This would clearly be of interest to both naval and commercial ship designers and builders in the mid- to late 1990s. 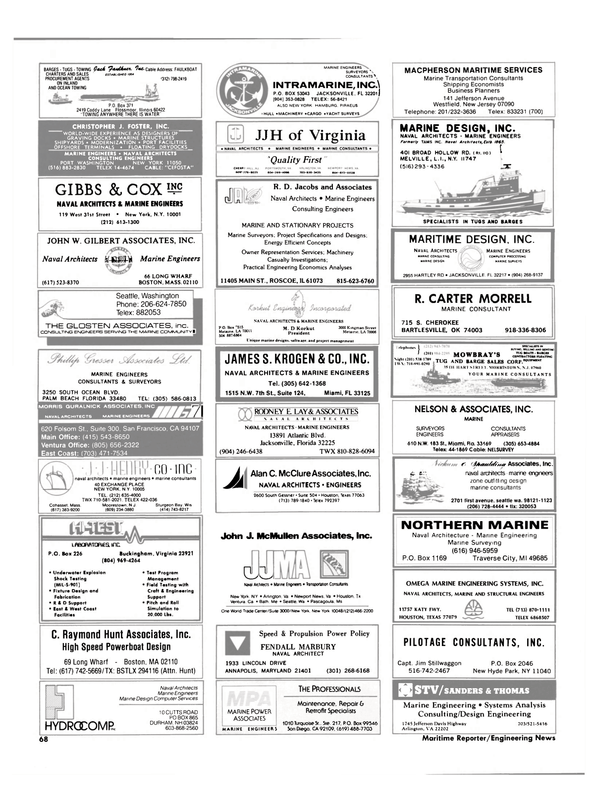