James J. Henry, a leading naval architect and the founder and president of the naval architectural and marine engineering firm bearing his name, died at the age of 73 on November 2, 1986 following a heart attack.

Born at Ancon, Canal Zone, on 22 June 1913, Mr. Henry was graduated from the Webb Institute of Naval Architecture in 1935. Following his graduation, he served in the Technical Division of the Bureau of Marine Inspection and Navigation, whose function is now performed by the United States Coast Guard. In 1938, he joined the technical staff of the United States Maritime Commission, working under the supervision of James L.

Bates, Director of the Technical Division. From 1941 to 1945 he was employed by the Consolidated Steel Corporation at Wilmington, Calif., where he supervised the construc- tion of the attack transports Doyen and Feland, the first vessels of their type. He later became assistant to the production manager, and was involved in the construction of Cl-B cargo ships, BD-1 troop transports and other vessels.

In 1946 he launched his own consulting naval architectural business, incorporating the firm as J. J. Henry Co., Inc. in 1951. Throughout the following 40 years Mr. Henry was recognized as a leading innovator in the design, conversion and modernization of specialized cargo vessels.

He was a pioneer in the development of vessels for the carriage of liquefied natural gas at cryogenic temperatures and near atmospheric pressure; his design in the early 1960s for Bridgestone Maru, the first large fully refrigerated LPG carrier, led to the construction by others of a worldwide fleet of over a hundred of such ships; he was in the vanguard of those whose promoted the container ship; the range of his designs for the jumboization and conversion of war-built ships (notably the T2 tanker and the C4 transport) to other uses included ore carriers, container ships and chemical carriers in addition to conventional petroleum tankers.

But his talents were not exclusively devoted to seagoing vessels: he prepared the design of the floating mammal pavilion for the New England Aquarium at Boston, and of barges and other less glamorous ship types.

Mr. Henry joined The Society of Naval Architects and Marine Engineers in 1937 and was elected an Honorary Member in 1970 and a Fellow in 1974. He served as the Society's president in 1969 and 1970. At its annual meeting in 1967, the Society awarded Mr. Henry the prestigious Vice Admiral "Jerry" Land Medal for outstanding accomplishments in the marine field. In 1977 he received the Society's David W. Taylor Medal for notable achievement in naval architecture and marine engineering. He was also the recipient of the "Elmer A. Sperry Award" for advancing the art of transportation through the development of barge-carrying ships, and was the author of two major papers before the Society: "Modern Ore Carriers" in 1955, and "Container Ships" (co-authored with Henry J.

Karsch) in 1966. For the latter, he and Mr. Karsch were awarded the Captain Joseph H. Linnard Prize for the best paper contributed to the Society during that year.

Under the direction of Mr. Henry, J. J. Henry Co. became one of the world's largest and most highly respected naval architectural firms.

Ships bearing the hallmark of a Henry design were built or converted at shipyards in the United States and throughout the world. A friendly, congenial man whose enthusiastic support of the American marine industry and of Webb Institute was quickly perceived by those fortunate enough to cross his path, either in business or socially, Mr.

Henry devoted his career to his profession in a way that few persons will ever achieve. The maritime world will miss him and the insightful perspectives of naval architecture and marine engineering that were so much a part of his life. 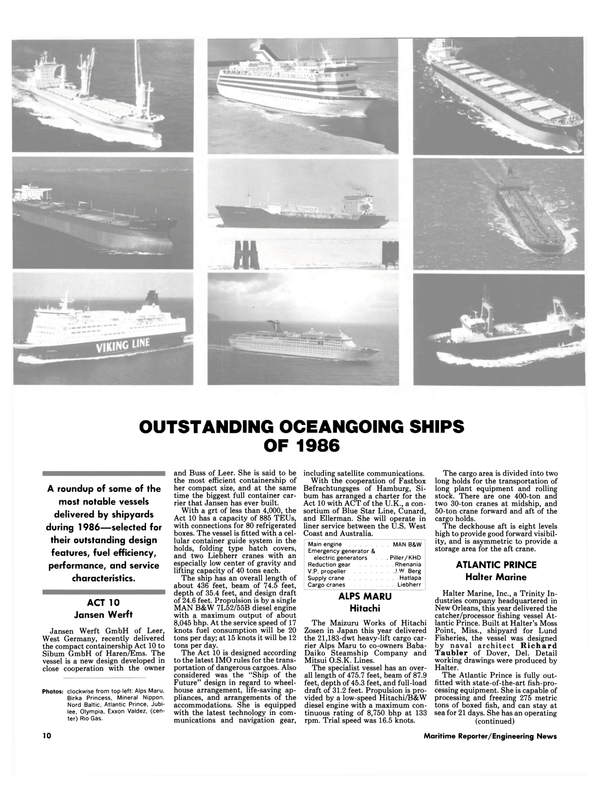