High-Speed Innovative Containership To Be Designed By Japanese

Key To Fast Ship Design May Be Submerged Cylinders An $11 million project to design a small containership that will travel 55 miles an hour and carry 1,000 tons of cargo is being carried out by the Japanese Government and several Japanese shipyards.

Known as Techno-Superliner, the high-speed cargo ship could carry 10 times as much cargo as a Boeing 747, yet travel between Tokyo and Hong Kong or Shanghai in less than a day, Japanese shipyard executives say. That trip takes ocean freight three or four days.

A consortium of seven Japanese shipyards working with Japan's Transport Ministry, the Technological Research Association for the Techno-Superliner, said the new ship will have a range of about 600 miles. That would make it possible for the vessel to reach Asian industrial centers in South Korea, Taiwan and China.

The research association said shipbuilders believe there will be strong demand for a high-speed containership capable of working the intra-Asia market, in part because of the rapidly growing demand for express delivery of small and light cargo.

Hie group said in a background report, "In Japan, where industrial and economic structures have changed rapidly, improvement of the transportation system is needed to cope with the sizable increment in the volume of trade between Japan and the newly industrialized economies of Asia. An ultra-high-speed vessel like the Techno-Superliner, which is halfway between a containership and air freighter, is being sought." The superliner could carry more cargo than a plane but move it more quickly than a ship, just as sea-air cargo uses a mix of ocean and air shipping to cut ocean shipments in half at half the cost of all-air shipment, the association said.

The group expects to spend $11 million by the end of 1993 to prove out the technologies required in such a ship. The shipbuilders estimate that it would cost about $100 million—about 30 percent less that the cost of a new 747 air freighter—to build the ship.

Japanese researchers are evaluating whether their envisioned high-speed containership should ride on a cushion of air like those used by large hovercraft, or be suspended above the water on a pair of submerged cylinders.

Managing director for the research association Kazuo Sugai said early exploration of the hovercraft idea has shown potential problems with damage to rubber skirts used to contain the air cushion when moving through rough seas.

As a result, Mr. Sugai told Japanese Government officials, the yards are concentrating on designs that use high-stability submerged cylinders. The U.S.

Navy pioneered the submerged hull concept, known as small-waterplane area, twin hull, or swath, for use in producing a better antisubmarine platform.

To power the Techno-Superliner, Japanese designers hope to adapt gas turbine engines built for aviation use. One proposal calls for use of four 25,000-hp engines to suck in seawater and fire it out of a series of submerged nozzles.

Either General Electric Co. or Rolls Royce may be asked to help on the engines, the association said.

Other shipyard engineers, however, are trying to find lightweight materials durable enough to stand the pounding of moving across the ocean at a speed of 50 knots or more.

A mix of titanium, aluminum alloys, high-strength plastics and carbon composites probably will be used.

The designers envision the superliner with slots for up to 150 twenty-foot ocean containers, though the ship could also carry air containers or automobiles.

On shorter trips between Japanese cities, maximum cargo loads could be greater than on international runs. 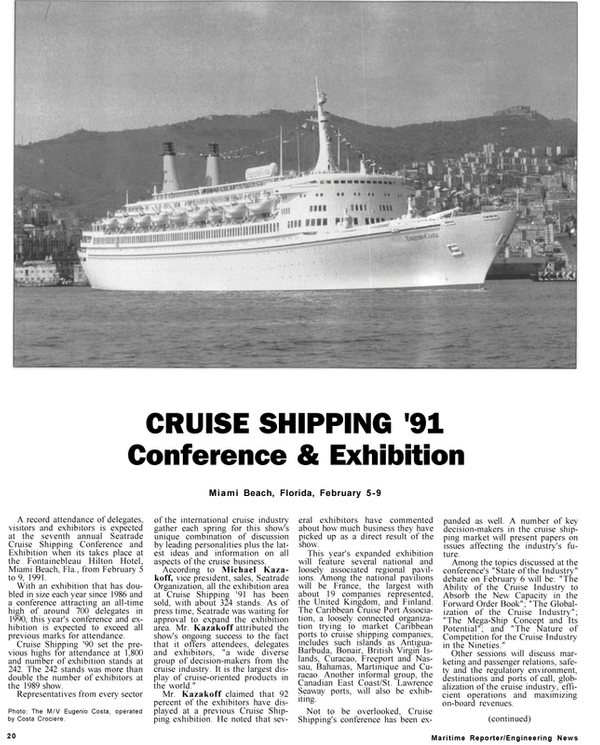 Read High-Speed Innovative Containership To Be Designed By Japanese in Pdf, Flash or Html5 edition of January 1991 Maritime Reporter