One-Man Control Of All Ship Functions, Port To Port Possible With Sperry Marine Route Control System Integrated With ICS System The recent entry into service of the 765,650-cubic-foot reefer Ditlev Lauritzen can be described as historic for a number of very good reasons.

The ship, first of a class of four, is reported to be the largest dedicated reefer ever built. Her completion and acceptance marks the fulfillment of a unique project in which the Danish Ministry of Industry has acted as coordinator in the realization of the most advanced concepts of marine automation.

Through these concepts, applied in an Integrated Ship Control (ISC) System, one man can supervise the vessel's navigation and monitor and control all machinery and cargo systems.

As a result, the Ditlev Lauritzen is approved for operation with a total crew of six. The new vessel, which was designed and developed as part of Denmark's ambitions Projekt Skib, or "Project Ships," program, is sailing under the Danish flag in the fleet of Lauritzen Reefers.

The technical director of Danyard, Jens Viskinge Jensen, was able to celebrate an anniversary together with the completion of the first Project Ship, refrigerated cargo vessel number 25, in the history of the Lauritzen Group shipyards.

Mr. Jensen said, "A number of details from refrigerated ships previously built for J. Lauritzen have appeared again, but the project has still been different from earlier ships and has presented many challenges.

"From the beginning of the project we put an extraordinary amount of resources into our drawing office.

We were particularly concerned with the high degree of automation involved and we were very pleased to see that everything worked the very first time." A highly complex ship with a great number of large hatches and cargo holds placed demands on coordination, imagination and ingenuity.

"The Project Ship is not just a refrigerated cargo ship, it is one of the most advanced of its kind ever built. The shipyard, the shipping company, the authorities, the classification society and the suppliers have all worked in close cooperation with each other and this has been a pleasure. When you can add to this that all specifications such as weight, speed, carrying capacity, technique, noise and vibration levels, etc., were met with, we can also take pleasure in the fact that the ship has given the entire shipyard a further technological boost and provided greater possibilities for the future," Mr. Jensen added.

An important aim of the Project Ship concept is the achievement of very low manning levels. The Integrated Ship Control (ISC) system designed and supplied by Soren T.

Lyngso A/S has been developed to permit this.

ISC integrates navigation and the monitoring and control of machinery in a single computer system.

The operator supervises and administers ISC from the ship's bridge.

By optimizing the use of the ship's main propeller and thrusters to achieve maximum maneuverability, ISC also eliminates the need for tug assistance.

The navigation system includes route planning and automatic adjustment of course and speed to conform with the planned route. Lyngso/ Valmet Marine have supplied a bridge system in which a Sperry Marine Route Control System is integrated with the ISC system.

Features of the Sperry Marine RCS include a track-keeping module and an ETA pilot. Well before sailing, the watch-keeping officer can read-in the waypoint parameters for his proposed route, as well as the desired arrival time, at his Navigation Work Station.

The engine is arranged for operation jn heavy fuel oil, IF-380, and develops 15,300 bhp at 121 rev/min corresponding to a trial speed in excess of 21 knots.

A Renk-Tacke power takeoff gear box, with an integral coupling and multidisc clutch is mounted at the front end of the main engine.

The KaMeWa c.p. propeller is four-bladed and has a diameter of 5,400 mm.

Control of the main engine, including the c.p. propeller, is integrated in the ISC System, the machinery being fitted with all necessary transducers for temperatures, pressures, etc. Two terminal screens on the bridge are dedicated to main engine monitoring and control.

The bow and stern thrusters, rated at 1,000 kw each, are of Brunvoll Type SPR-VR. The electric motors are direct-starting. The thruster propellers, with a diameter of 2,000 mm each, exert an estimated thrust of 14.8 t at a speed of 295 rev/min.

Each of the 23 'tweendeck compartments is served by a separate refrigerating system, divided into nine sections. It is thus possible to carry a great many products at different temperatures, down to -29 degrees C.

Sabroe Refrigeration has developed one of the world's most advanced refrigerating plants for this ship. 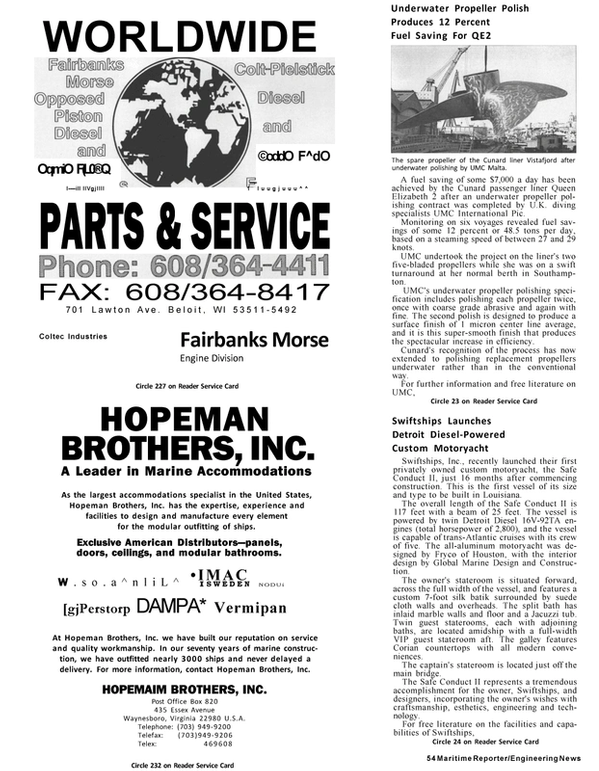