BMD Posts Successful Year; Eyes Retrofit Market Following a period of transition and consolidation of its marine operations, Bethlehem Steel Corporation, at one time one of the leading shipbuilders in the nation, has made a successful transformation into one of the leading U.S. full service ship repairers.

From August 1989, after a fourmonth strike was settled at the yard, to October 1990, Bethlehem Steel Corporation's Baltimore Marine Division (BMD), located at Sparrows Point, Md., drydocked a total of 28 commercial and governmental ships. Twenty-one of the vessels, composed of U.S.-flag and foreign-flag commercial, U.S. Navy, Military Sealift Command and Ready Reserve Force ships, were repaired during 1990.

In an interview with MARITIME REPORTER, BMD officials were particularly encouraged by the company's success in the cruise ship repair sector.

"We are one of the leading U.S.

According to Mr. Joyce, the Bal- timore Marine Division already has firm bookings for drydocking four cruise ships for 1991 and eight tentative bookings as well. BMD plans to simultaneously drydock two cruise ships at the yard—one in its huge 1,200- by 200-foot basin and one in its 40,000-ton-lift-capacity floating drydock Bethpride.

During a tour of the yard, workers were observed performing repairs on the 47,000-gross ton Celebration, owned by Carnival Cruise Lines.

According to BMD's chief estimator Thomas J. Young, the project called for the replacement of 150,000 pounds of steel in 16 days.

The Celebration project follows closely on the heels of the recently completed work on the ITB Francis Hammer—160,000 pounds of steel replacement in 21 days.

Besides the Celebration, BMD was also preparing the USS Waterford (ARD-5), a Navy submarine drydock normally operating out of Groton, Conn., for a mid-December delivery. The Waterford was undergoing steel, pipe and valve renewals under an $8.7-million contract.

BMD was replacing steel on the operating platforms on both pontoon decks. The Waterford was docked in BMD's huge 1,200- by 200-foot basin, which can handle vessels as long as 1,200 feet and wide as 192 feet. A two-position intermediate gate can divide the basin's length into sections measuring 300 feet and 900 feet, or 685 feet and 515 feet. This gate increases the yard's flexibility for handling a variety of jobs simultaneously.

The yard also recently completed 300,000 pounds of steel replacement on the ITBs New York and Jacksonville.

While the volume of work at BMD has been very good for 1990, business has slowed as of late due to Operation Desert Shield.

"The initial effect of Operation Desert Shield was a flurry of activity in reactivating ships from the reserve fleet," said Mr. Joyce. "Now, however, government work is being delayed due to the uncertainties in budgeting for Operation Desert Shield. In addition, some commercial operators are deferring dockings in order to make their ships available for government charter," he said.

Despite their success in the shiprepair market, however, BMD officials were quick to emphasize the fact that they are not out of the vessel and barge new construction markets and are pursuing a number of tank barge and double-hull forebody tanker retrofit designs.

"We just completed the tests for a preliminary design of a 60,000-barrel tank barge and have plans for a 90,000-100,000-barrel design," said Karl E. Briers, BMD marketing manager. "We are also working on a double-hull forebody for two classes of tankers—one for a class built by Bethlehem Steel in the seventies.

The trick is trying to make the forebody an attractive option for the owner." According to Robert A. Fiorelli, BMD's manager of marketing, sales, planning and technical services, newbuilding double-hull tanker contracts spurred by the Oil Pollution Act of 1990 would probably start being awarded in 1992.

"Our facilities, as far as hull structure goes, are as good as any shipyard in this country. We are currently talking with two major operators about developing (tanker retrofit) designs," Mr. Fiorelli said. "We are interested in series construction and the multiple conversion market," he added.

Baltimore Marine Division's position was best summed up by Mr.

Briers who said, "We are positioning ourselves for the possibility of a sustained upturn in new construction.

We see that in the future for us." Perhaps another transition lies ahead for Bethlehem Steel's Baltimore Marine Division.

For free literature detailing the facilities of BMD, Circle 56 on Reader Service Card 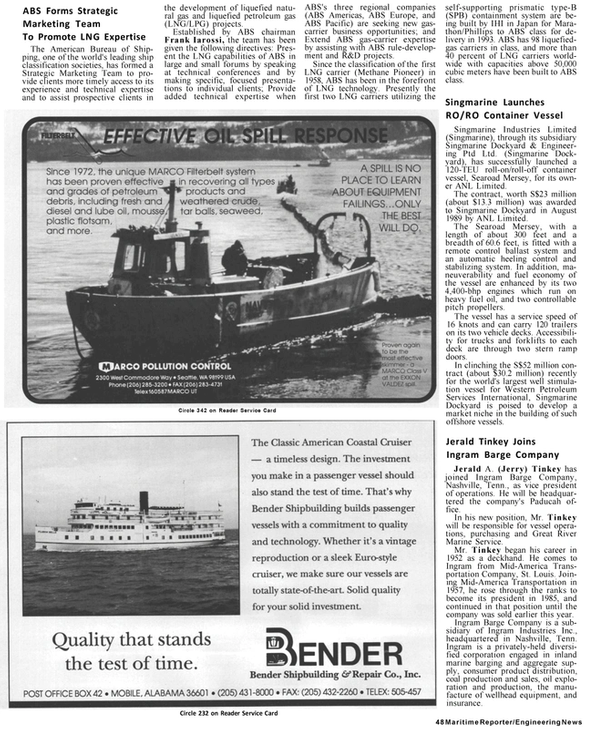