FBM Marine Ltd. of Cowes, Isle of Wight, has won a contract to build three new catamaran ferry craft for the Riverbus Partnership who operate the RiverBus service on the River Thames.

The 62-seat catamarans are specifically designed for use on riverine and harbor ferry routes. The design has taken into account many environmental concerns which will not only benefit Riverbus passengers but other users of the Thames and the general public as well.

In particular, both internal and external noise levels will be low and wash levels generated by the new craft will be reduced to the point where, subject to PLA approval, constant high-speed operation should be possible.

The catamarans will be constructed from Fiber Reinforced Composite (FRC) material. This material has been specified by the Royal National Lifeboat Institution for their new offshore lifeboats, the Mersey class, currently being built at FBM. FRC gives the new catamarans a high degree of strength, stiffness and resistance to impact damage.

The catamarans will be powered by two Scania 340-bhp marine diesel engines, one in each hull. These will drive two Riva Calzoni IRC 390 waterjets instead of the conventional propellers. This propulsion arrangement will give the catamaran a fully loaded draft of .75 meters, and a top speed of over 25 knots.

Waterjet propulsion will also enhance maneuverability of the catamarans, which gives higher levels of safety and improves the turnaround of the ferries at the terminals. 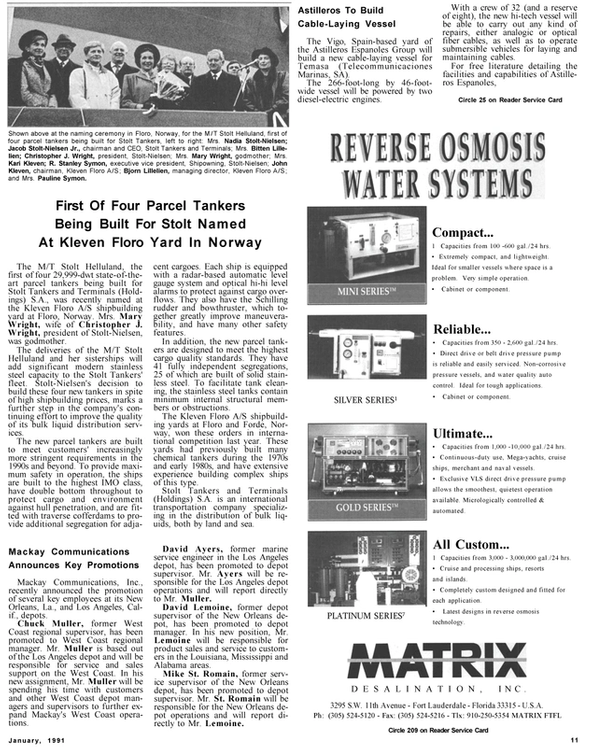