Despite the recent drop in passenger bookings, some industry analysts are predicting that by the year 2000, more than 10 million passengers will take cruises annually.

These projections are based on a growth level of 10 percent per year.

Many cruise lines are still bullish on the market and believe that the industry is only stopping for a breath before it prepares for another strong run.

Cruise Lines International Association (CLIA), a trade association representing 36 cruise lines, estimates that some 65 million people are potential cruise-takers. Over half that number—some 38 million— have indicated a definite or probable interest in taking a cruise in the next five years, translating into revenue potential of up to $80 billion.

CLIA reports that 17 new or refurbished vessels, with about 11,000 passenger berths were added during 1990. With these new cruise ships, there now is a total fleet of 120 vessels with 84,000 berths serving the North American market.

This equation alone potentially creates more than a 10 percent increase in passenger carryings per year.

The association projects the rate of growth in new berth capacity over the next five years as only 7.6 percent, compared with an average 10 percent growth rate in passenger bookings over the last five years.

Any overcapacity might be eased by the late delivery of some vessels, but bookings on new spectacular megaton ships will also likely displace sales for older vessels.

As lines with older vessels fight harder to survive a consolidation of market share, new entrants in the $5 billion a year North American market will face increased competition and perhaps more market consolidation.

The industry's greatest concern in the short term, however, is consumer spending cuts due to the U.S.

economic recession. A spokesman for Carnival Cruise Lines of Miami suggested that customers who normally would book premium cruises are expected to opt for less expensive packages in the face of the U.S.

One reason for optimism in the passenger ship industry is that, more and more, the traveling public is realizing that cruises provide an excellent value and vacation alternative.

And cruise lines believe that this increased consumer awareness will fuel continued interest in and acceptance of cruise vacations.

Vacations have become a necessity, not a frill. In tough economic times, consumers will choose the best value for the money, and the cruise industry has successfully positioned itself at the top of the value vacation category.

The "all-inclusivity" of a cruise vacation means that cruise passengers known in advance what their vacation will cost and can plan accordingly.

Furthermore, the cruise industry is also optimistic that its wide variety of cruises to choose from—from ultra-luxury to economy—priced, from long duration to short weekend jaunts of two, three or four days—will also attract new customers.

In an effort to offset more cautious or reduced spending, some cruise lines are augmenting their discount practices by creating new cabin classes at reduced rates.

In addition, cruise lines have stepped up their marketing campaigns by boosting their ad spending 20 percent in 1990 to $300 million.

The major target of the cruise industry is first-time customers.

Cruising accounts for only 5 percent of the nation's $100-billion-per-year leisure business. Cruise lines are hoping new programs and itineraries will not only attract new passengers but also bring repeat business by offering previous customers a new experience.

According to Jim Godsman, president of CLIA, at the Holiday at Sea Convention in London, the number of first-time cruisers was a very encouraging sign for the industry in 1989. A study in 1986 showed that they accounted for 38 percent of all business. In 1988, this figure grew to 44 percent, and last year the figure rose to 50 percent.

At a recent marine conference in Vancouver, B.C., Canada, Richard Skinner of Seattle-based Holland America-Westours, stated that the international cruise industry has grown from a mere 500,000 passengers two decades ago to 3.7 million in 1989. Mr. Skinner also believes that the industry will continue to grow by nearly 10 percent per year over the next five years.

The Pacific Northwest has been a particular area of growth in the North American market. Since 1986, Alaska has become the fourth largest cruise destination, with about an 8 percent market share, surpassing the 100,000 passenger mark for the first time.

In addition, passenger growth through Vancouver has grown to from 267,000 five years ago to 388,000 last year. Holland America Westours plans to add new capacity this year.

Furthermore, Holland America also plans to enter the eastern Canada market with the 1,200-passenger Rotterdam. She will make autumn cruises from New York to Quebec City and Montreal.

"As fleets continue to grow, cruise lines will be looking for destinations which can help them fill their ships," said Mr. Skinner.

"There is a huge population pool in the New York, Boston, Philadelphia area which we can tap into, that we think would love to cruise to Canada," he added.

Rumors are circulating that Crystal Cruises Ltd. also plans to enter the eastern Canadian cruise market with the new 960-passenger luxury liner Crystal Harmony. Like the Rotterdam, she would also sail out of New York.

Although the North American market represents 84 percent of the world total, other areas are growing in importance.

According to Michael White, a spokesman for Mitsui O.S.K. Lines, his company is focusing on the Asian cruise market, which has been growing rapidly.

Compared with 4 million passengers a year in North America, Japanese passenger bookings rose to 142,000 last year from only 120,000 in 1988. Mitsui O.S.K. Lines' focus on the Asian market led the company to form a joint venture with a Chinese entity to operate a ferry between Kobe, Japan, and Tianjin, China.

In addition, the Japanese company is also involved in the new cruise company Diamond Cruises Ltd., along with Finnish and U.S. interests.

Diamond Cruises Ltd. plans to enter the Caribbean and Mediterranean markets in 1992 with the revolutionary new SSC Radisson Diamond, an 18,400-gross ton cruise ship based on semisubmersible technology.

Besides Asia, Europe is a growth area for the cruise industry as well.

Without a doubt the cruise industry will continue to grow worldwide, but just how much will depend on factors outside of its control. 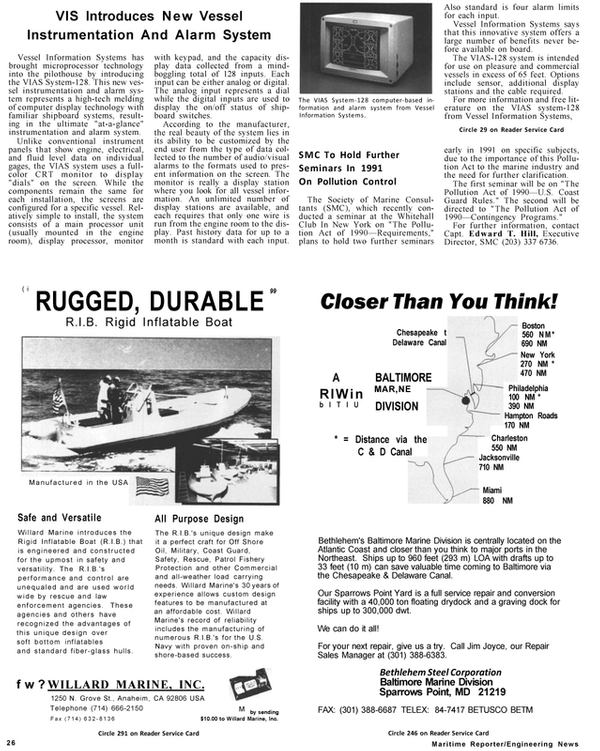