As the Panama Canal prepares to celebrate its 100th anniversary, insurers are warning of the increased risks that will arise from the plan to double the cargo-carrying capacity of the world’s most famous canal.
In a report entitled Panama Canal 100: Shipping Safety and Future Risks, Allianz Global Corporate & Specialty (AGCS) identifies that the value of insured goods transiting the canal zone may increase by over $1 billion per day following completion of the Third Set of Locks Project, which will see two new sets of locks built, creating a third transit lane for larger ships.
Today, more than 12,000 ships navigate the canal each year, a number that should increase following the anticipated opening of the new locks in 2015. It is forecast the expansion will enable between 12 and 14 larger vessels per day, or approximately 4,750 additional ships per year, to pass through the canal. Of particular significance is that many of these ships are expected to be new-Panamax class container vessels of 12,600 teu, which are almost three times larger than the existing largest vessels able to access the canal (4,400 teu).
With approximately 3 percent ($270 billion) of world maritime commerce ($9 trillion) already transiting the Panama Canal every year, the safe passage of vessels is critical. However, AGCS warns the increased traffic and larger vessels may challenge the Panama Canal’s improved safety record over the past decade with the risks exacerbated through the initial period of the canal opening.
“Larger ships automatically pose greater risks,” said Captain Rahul Khanna, AGCS’s Global Head of Marine Risk Consulting. “The sheer amount of cargo carried means a serious casualty has the potential to lead to a sizeable loss and greater disruption.”
Post-expansion, if operating at full projected capacity, AGCS estimates that this could result in an additional $1.25 billion in insured goods passing through the canal in one day, with larger ships playing a critical role in increasing throughput capacity.
An additional element to consider, and one that has been at the forefront of many salvage conference agendas for many years as vessels grow increasingly large: such vessels can pose serious salvage challenges in a congested shipping environment, even potentially leading to blockages. In the event of an accident there may be an insufficient number of qualified experienced salvage experts available to handle the ships.
AGCS believes training is key to mitigating the new risks involved, both in the canal region itself and in affected ports.  “The expansion of the Panama Canal will represent a new shipping environment for many mariners,” said Captain Khanna. “Due to the increase in the number of larger vessels passing through this important waterway the level of training provided to pilots will be extremely important. Attempting to maneuver one of these vessels through such a restricted space in itself creates a much bigger hazard.” The Panama Canal Authority has invested heavily in training, including plans to charter a post-Panamax ship to practice maneuvers through the new lane.

Losses in Perspective
While the focus is on potential losses, it’s worthy to note that the Panama Canal region has a steadily improving safety record, with only 27 shipping casualties over the past decade and just two total losses. This accident rate of around 1 in every 4000 transits compares favorably with other major waterways such as the Suez Canal (1 in 1100 transits) and the Kiel Canal (1 in 830 transits). As the most frequently transiting types of vessel, bulk carriers (11), cargo ships (9) and container ships (9) dominate the canal’s casualty list, collectively accounting for over 75 percent of all incidents since 2002. 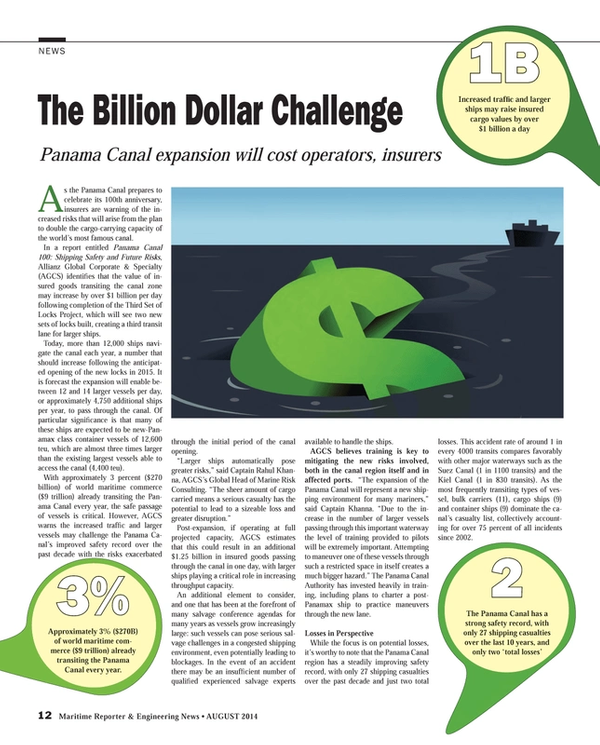