Not every ship repair facility has a drydock or marine railway.  But thanks to a Sturgeon Bay, Wis.-based company, shipbuilders and repair yards from small to large can get a real lift.
Marine Travelift builds boat hoists, self-propelled transporters, and marine forklifts, with more than 3,500 units delivered worldwide, and can be found at waterfronts all around the world.
“Our boat hoists range from 15 ton all the way up to 1,000 ton capacity,” said Jason Johnson, North American sales manager. “Marine Travellift has been involved with shipyards since the 1980s.  It’s a market that is growing in popularity for our products,” said Johnson.  “Being able to safely lift vessels to and from the water in a relatively quick manner as opposed to traditional drydocks is very attractive to our shipyard clients.”
Johnson says there are real efficiencies.  “It’s possible to move vessels into protected area off the waterfront, so workers can get around a vessel to work on it, or moved to an area where there is environmental protection for sandblasting.”
The largest models can handle 1,000 ton lifts.  Johnson says the Colonna’s Shipyard in Norfolk, Virginia, is being used for projects up to 1,000 metric tons.  That makes the lift an ideal choice for tugs, work boats, ferries, offshore supply and crew boats, and barges.
Colonna’s has used the 1000 C to haul small Navy combatants such as the USS Monsoon (PC-4) and  USS Squall (PC-7).
“Using the Marine Travelift hoist saved the U.S. Navy and the taxpayers several hundred thousand dollars of drydock fees, since we could berth the ship on land for the eight months it was out of the water,” said Richard Sobocinski, vice president of contracts for Colonna’s Shipyard. “Plus, one of the more positive aspects of using the machine is that environmental issues inherent in ship repair can be more easily controlled and managed on land.”
In addition to retrieving vessels from the water for maintenance and repair, Johnson says the lifts can also be used to for fabrication and handling of caissons and specialty items.
“The units are self-propelled with rubber tires, and are operated remotely using a wireless transmitter, which allows the operator to walk anywhere around the machine,” Johnson says.  “The operator can position himself at a preferred vantage point.  The controls are laid out in a manner that is very intuitive to an operator.”
“We’re engaged in a partnership with the client right from the start to understand where they see where their business is going currently and in future.  We help them determine the best model for their requirement,” he says.  “This is a purchase that will last for a number of years.  We want to look forward with the client.”
Johnson says the company has many repeat customers.  Newport Shipyard in Rhode Island, for example, has three units in operation.
“You can haul a vessel out of the water and hang it for hull inspection, or to change out a prop, without setting it down” Johnson says.  “It saves on labor, especially if the vessel going back in in a short amount of time.”
In fact, Colonna’s Shipyard was able to relocate its blasting and painting operations away from the open water to land basins where the yard can collect and process waste water before discharging it.
The articulated pivot trunnion allows for the frame to flex under uneven terrain without causing structural damage or risking the safety of the load. Four-wheel steering provides a tight turning radius for precision handling of boats in limited spaces. ”And it requires no greasing,” Johnson says.
“We deliver the unit delivered in pieces by truck or open top containers.  We provide a factory service technician from Sturgeon Bay to supervise erection of the machine.  It connects together with bolting flanges.  Assembly is quite efficient and quick,” Johnson says.  “We also provide training to the customer.”
“The market is trending up,” Johnson says.  “What we’re hearing from our customers is that our product provides an opportunity to make their business more efficient.” 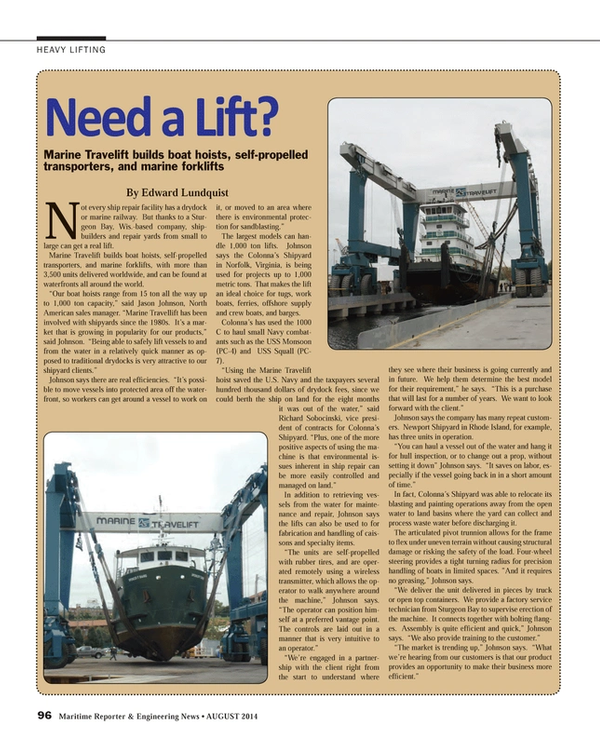