Can you tell us a bit about your background.

I graduated from the U.S. Merchant Marine Academy in 1971 and began work at Bethlehem Steel Shipyard. Over the next  44 years in the Marine business I was employed both for large  vessel operators as Engineering Manager and VP, and as VP-Operations of several Shipyards in the U.S. Gulf of Mexico. I have seen both sides of the business.

Having seen your fair share of ‘cycles,’ describe what you’ve seen over the last year.

Gulf Copper dry docks have been steadily booked for the first half of the year, and the second half of 2014 looks to be just as busy. Our Port Arthur activity has been driven by the Offshore Business with supply vessels , seismic vessels and integrated tug/barge work.  In Galveston we have seen several large drilling rig jobs along with a fast paced five vessel conversion project. Interest in offshore development and an expanded market in Mexico seem to be the primary drivers, along with increased transportation of petroleum cargos. Work for government agencies seems to be on the uptick as the effects of sequestration abate.

When you look at the expanse of your operations, what do you count as the primary strength of your company?

We have a consistent work force and  management team. Many our skilled workers and front line supervisors have been working with our management group for over 20 years.

How is Gulf Copper investing today, in training and in people?

Safety and Loss Control remain high priorities. The training in this area is constant. We have also developed a training program for our Outside Machinist department where we have a strong demand. Development of welders is always critical, and we were recognized recently for sending our welding instructor to Guam for an apprenticeship program.

Looking at the market overall, where do you see the best opportunity for growth?

We feel the offshore market will stay strong, especially given the substantial number of large support vessels being delivered in the near term. Seismic vessel work has increased for us and looks promising in the near future. The Offshore Tug/Barge business could continue to grow as the production of oil continues on shore in Texas.

What have been a few of you most interesting projects in the last 12 months? 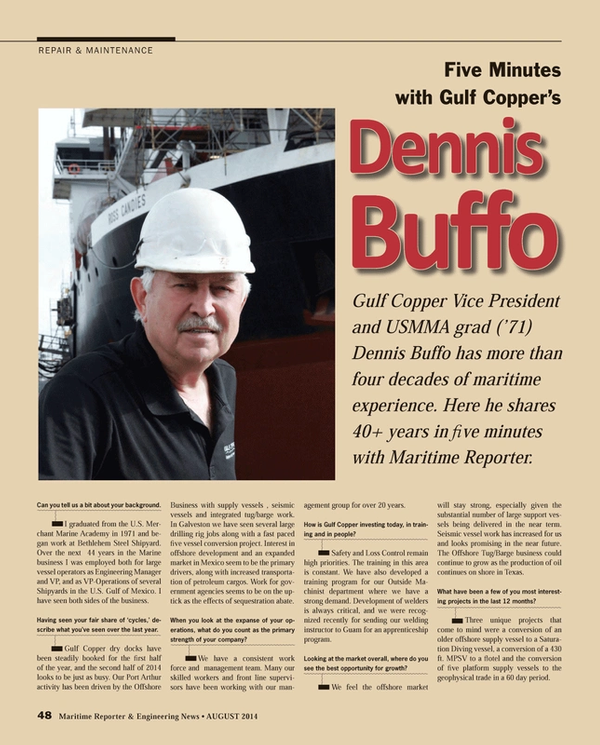