The German shipbuilding industry has a world market share of around one percent. This is certainly in another league compared to China, South Korea and Japan, which divide the global shipbuilding pie of containerships, bulk carriers and tankers among themselves. But the German shipyards are on top in Europe.
Here, around 90,000 people in the shipbuilding and supply industry are employed, and the German maritime cluster remains in strategic and symbolic importance. Aside from the Norwegians, which maintain a strong presence in the offshore segment, the Germans companies are in a worldwide leading position.
Recent news about the German shipbuilding has not been the best. But the takeover in early February 2014 of Sietas-Werft – which is based in Hamburg and was traditionally rich, but now insolvent – by Pella Shipyard closes one door, but opens new perspectives for remaining employees. And the future of the P+S-Werft in Wolgast and Stralsund remains unclear.
A year and a half after its insolvency, the last newbuild left the assembly hall of the Volkswerft in Stralsund, a RoRo ship for the Danish shipping company DFDS.
For this shipyard and for the entire German shipbuilding industry, the prospects of building high-value, specialty ships today holds the most promise for future business.
“The German shipbuilding can score points with all what is complex, where customers have high requirements and where they are willing to pay a higher price because they depend on that everything works well,” said Reinhard Lüken, General Managing Director of Verband für Schiffbau und Meerestechnik e.V. (VSM).

The Global Shipbuilding Perks Up
German shipyards are essentially holding steady, with the turnover of all German shipyards at the end of the third quarter 2013 being $4.6B, which is slightly under the $5.3 billion recorded at the end of Q3 2012. Despite this drop off, VSM is taking a positive view, as it sees slightly increasing demand worldwide, as well as a growing population and the increasing claims of affluence. In addition, German companies as a whole have found growth for efficient and environmentally friendly technologies.
A spate of recent impressive contracts include seven vessels valued at about $1.4B. This line-up includes a cruise ship, a yacht, a pipe-laying ship, a coastal patrol boat as well as three rescue cruisers. In addition there is a further (and so far biggest) platform for the offshore wind industry. With this the total order income of all German shipyards includes a volume of more than $11.9B.

Specialists Needed
A good example of progressive companies making their way in a tight environment are Meyer Werft in Papenburg and its daughter company Neptun in Rostock-Warnemünde. In 2013 two cruise ships, one LNG-gas tanker out of Papenburg and 10 river cruise ships out of Rostock ensured employment.
“With the engagement of our employees it was ensured that the ships could be on time and succesfully delivered. This particular motivation is what we will need also in the coming years,” said Bernard Meyer, General Manager. But difficulties still remain, and recently even the experts of Meyer Werft couldn’t secure an order for two AIDA newbuilds against Japan’s Mitsubishi.
In total, seven cruise ships, 29 river cruise ships and one research vessel will be planned, designed and built from Meyer Werft.
With these order books and the consequent implementation of the company’s efficiency strategy (SSS = System Schlanker Schiffbau = system lean shipbuilding) Meyer sees opportunities for both yards: “big chances in the hotly-contested global shipbuilding market to survive.”
Also the focus of the Flensburger Schiffbau Gesellschaft (FSG) is clear: “Our future is clearly the special shipbuilding segment,” said FSG-Chief Peter Sierk. In 2013 the shipyard delivered four RoRo-special ships to owners Ulusoy Sealines, UN Ro-Ro Isletmeleri S.A., Canadian Shipping Company Oceanex and RollDock B.V. in Holland, the ”Rolldock Star.”
FSG made a name for itself over the past 15 years as a leader in the building of RoRo and RoPax ships, and entered the Offshore market with two orders for Dutch operator RollDock as well as two new orders for seismic vessels for WesternGeco. For the Flensburg-based yard, this is another successful step in the expansion of its production portfolio. “We have been working in the Offshore sector for some years now and this order of complex products proves that we have established our position in this high-tech market,” said Sierk.
The two seismic vessels will be owned by Siem Offshore and chartered by the worldwide leading Offshore service provider Helix Energy Solutions Group, Inc.

Maritime Know-How
TKMS profiles as Europe’s leading system supplier for navy ships: in 2013 three corvettes have been delivered and the order books feature among others submarine boats for Singapore.
Companies such as Bremen Lürssen Werft are equipped with unique know-how during construction of luxury yachts. Just recently the shipbuilder of Bremen signed a contract for ships for the Saudi Arabian Coast Guard. “Production probably will take place on the Peene-Wefrt in Wolgast,”said a company spokesperson. Order volume and the number of ships were not confirmed, but according to media reports the amount is of $1.4B.
At the end of 2012 Lürssen purchased a shipyard for $23.5 million in what was the former East Germany, a yard which was reportedly the biggest military yard in the ex-DDR.
Meanwhile, life boat experts at Fassmer delivered last year, among others, one survey vessel, one rescue cruiser, a number of work boats and one research vessel. Last October Fassmer landed a deal for the construction of an innovative ferry boat from shipping company Cassen Eils, Cuxhaven, a ferry to navigate in the Helgoland-Service. This is significant in that it is the first newbuild under German flag equipped with environmentally friendly LNG technology.
Another innovation emanating from Germany comes in the form of Aeolus, which was delivered in February 2014 and was a premiere in German shipbuilding as it was the first Jack-Up designed and built in Germany. It was constructed at the Sietas Yard for Dutch hydraulic engineering company Van Oord.
In Bremerhaven, Lloyd Werft cannot complain about a lack of work. “We realize an intensive demand about our skills in the special ship building process, but remain also first port of call for repairs and modifications for cruise ships,” said  Rüdiger Pallentin, CEO, Lloyd Werft. After the cruise ships “Explorer” and “Mein Schiff1” were delivered in April and May last year, respectively, the yard signed during the International Cruise Shipping in Miami a contract for the repair of the U.S. cruise ship “National Geographic Explorer” (112 m long, 6,471 BRT) with its owner U.S. shipping company Lindblad Expedition Inc.

Strong Export Share
The combined turnover of all ship and boat building yards (including navy shipbuilding, repairs, modifications, inland shipping, etc.) are for the first three quarters, according to information from the Federal Statistical Office, in total $4.6 billion, slightly less than the comparable period in 2012 which was $5.3 billion. In total, approximately 98 percent of the civil ship building output are for export, which is similar to the last few years.
Export is traditionally also important for the shipbuilding supply industry. VDMA, the German Engineering Federation, reports that around 400 supply companies feature an average export rate of 74 percent. They benefit substantially from the increase of the worldwide shipbuilding demand and particularly of the increasing energy efficiency, which is a particular strength of the German manufacturer.
In Germany the ship building supply industry employs about 68,000 with an annual turnover of around $16B.
After the historic shipbuilding run and its abrupt end due to the global financial crisis, the ship supply picture has morphed, and today about 40% of the companies experienced growth in 2012, while about 33% reported a decline in sales. VDMA economic data delivered for 2013 again paints a positive picture for the entire maritime supply branch. The increase of the order incomes continued in 2012 at about four percent, a growth rate confirmed in 2013, too.  By sector, the offshore market continues to grow in importance in Germany, and it will be an important task for German companies to strengthen their presence in this market to increase overall sales growth. While the shipbuilding industry has certainly changed mightily in Germany – and in fact worldwide – it is clear that shipbuilding and ocean engineering are industries with big growth opportunities. As the world’s population continues to grow, so too will the requirement for food, commodities and energy, all of which travel liberally on the seas.
Germany has the best conditions in these markets to play an important role – because solutions for these highly ambitious challenges can only be created with the best engineering activities. Also in these difficult times a particular focus is on education at all levels, another strength of Germany and the technical markets it serves. 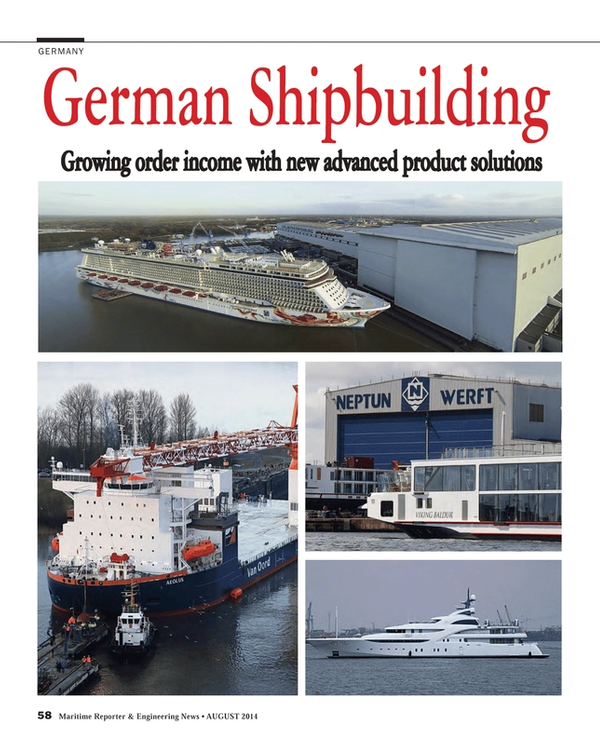