Navantia Banks on the Future

It is no secret that the Spanish shipbuilding sector has hit on hard times, particularly in the big ship sector where much of the commercial business has evolved to lower cost manufacturers in the Far East. But considering that Navantia has a 300-year history, the current downturn is put in perspective. While Navantia is not without challenges, it has the aforementioned experience and a military backlog to lean on. Navantia is engaged in the design and manufacture of Integrated Platform Management Systems, Fire Control Systems, Command and Control systems, Propulsion Plants and through life support for all its products. Even though its main line of activity is in the naval field, Navantia designs and manufactures systems for the Army and the Air Force as well. Navantia has strategically situated production centers in Ferrol Estuary, Cartagena shipyard and Bay of Cádiz, specialized in New Constructions, as well as Ship Repairs in the three areas. It has experience building the most technologically advanced ships like frigates, amphibious ships, patrol vessels, and submarines. In the last years, it has supplied ships for five different navies: Norway, Australia, Spain, India and Venezuela. It has also been selected in Turkey as the designer for the LPD program.
Navantia has a ship repair line of activity that goes from regular repairs to refurbishment programs, including conversions. The company has the facilities and know how for complex repairs comprising LNG’S and Cruisers. It has Fleet Maintenance Agreements with several  big ship owners. Important products and projects include:
•    F-100 frigates: In the last decade, it has built 10 frigates for the Spanish Navy and Royal Norwegian Navy and currently is providing design and technical assistance to the Royal Australian Navy for the construction of 3 AWD destroyers.
•    LHD ships: It has built one unit for the Spanish Navy, two units for the Royal Australian Navy and has been selected to design two units for the Turkish Navy.
•    OPVs: It has built 12 units for the Spanish and Venezuelan Navies and has been contracted to build two more for the Spanish Navy.
•    S-80 submarines: Currently building four units for the Spanish Navy.
•    Replenishment Ships: It has built three units for the Spanish Navy. 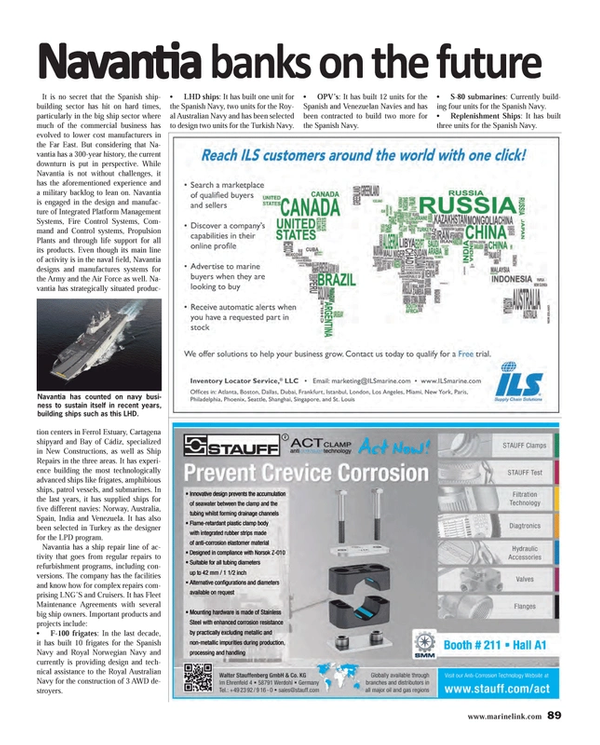 Read Navantia Banks on the Future in Pdf, Flash or Html5 edition of August 2014 Maritime Reporter