The IMO is on the verge of adopting the Polar Code, something that is important and long overdue.

The International Maritime Organization (IMO), a specialized agency of the United Nations, is on the verge of adopting the Polar Code.  When implemented, it will establish the first mandatory rules for operation of commercial vessels in polar waters.  This important step is long overdue.

Background
On 18 January 2010, the IMO adopted voluntary guidelines for ships operating in polar waters (Res. A.1024).  These guidelines were based on those approved jointly by the Maritime Safety Committee (MSC) and the Marine Environment Protection Committee (MEPC) in 2002.  The critical words were voluntary and guidelines.  Commercial ships operating in polar waters were not required to comply: most did, but some did not.  In addition, the guidelines, while helpful, were somewhat vague.  The guidelines were printed on 31 pages, if you don’t count the two pages of boiler-plate resolution introduction.  The draft Polar Code (for which the boiler-plate introduction has yet to be written) is printed on 45 pages.  Topics with increased emphasis in the draft mandatory version include stability in damaged conditions, safety of navigation, communications, voyage planning, manning and training familiarity, and prevention of pollution.  Probably the most significant change between the guidelines and the draft mandatory Polar Code is the provision for issuance of a Polar Ship Certificate indicating the environmental and operational capability for which the ship has been designed for operation in polar waters.  Coupled with that will be the requirement that every covered ship on a voyage that is in whole or in part in polar waters to have on board a valid Polar Ship Certificate and a Polar Waters Operation Manual.  Thus, once the new Polar Code comes into force, commercial vessels that elect to operate in polar waters must have been constructed for such voyages and must also be operated in a manner consistent with the unique hazards of such voyages.  This has not always been the case previously.

•    On 23 November 2007, the passenger vessel EXPLORER struck an ice floe in the Bransfield Strait near the South Shetland Islands in the Antarctic Ocean.  The hull was breached and the subsequent flooding could not be controlled.  The ship sank about 15 hours afterwards.  Fortunately, the passenger vessel Nordnorge happened to be nearby.  It promptly responded to the distress call and rescued all 100 passengers and 54 crew.  The marine casualty investigation stated that the major cause of the casualty was the mistaken impression of the master that he was encountering first-year ice when, in fact, he was sailing into much thicker and harder land ice.  The master was very experienced in Baltic waters, but was unfamiliar with the type of ice encountered in Antarctic waters.

•    On 4 December 2008, the passenger vessel CIUDAD DE USHUAIA grounded in waters of the Antarctic Ocean off the Antarctic Peninsula.  The hull was breached, but flooding was controlled.
Two fuel tanks were damaged.  The eighty-nine passengers were evacuated to a Chilean navy vessel which had responded to the distress call.

•    On 26 December 2009, the passenger ship CLELIA II was pushed onto the rocky shoreline of Petermann Island in the Antarctic Peninsula.  The grounding damaged the starboard propeller.  The ship was able to maneuver using its port propeller.  The passenger vessel Corinthian II, operated by the same company and then located only eight miles away, quickly arrived on scene.  It escorted the CLELIA II on a multi-day journey across the Drake Passage back to its homeport of Ushuaia, Argentina.  The ship was taken out of service for the remainder of the season so that repairs could be performed.

•    On 27 August 2010, the passenger vessel CLIPPER ADVENTURER grounded on a submerged rocky pinnacle in Coronation Gulf, Nunavut while transiting Canadian waters of the Northwest Passage.  On 29 August, all 128 passengers were transferred to the CCGS Amundsen, which fortuitously happened to be conducting survey and resupply operations in the general vicinity.  The CLIPPER ADVENTURER was refloated on 14 September and escorted to Epworth, Nunavut.  There was minor pollution and no injuries.  Amazingly, the weather during the eighteen days the ship was aground was almost ideal.  The rocky pinnacle had been previously identified and reported in a Notice to Mariners (although not yet charted), but the bridge team had not actively accessed the local Notices.  The ship’s forward-looking sonar was non-functional at the time.  The voyage plan relied on a chart with a route that had been surveyed based on a single line of soundings.  Regardless, the ship was proceeding at full sea speed when it grounded.

•    On 21 February 2011, the yacht BESERK went missing in the Ross Sea off Antarctica.  The yacht had brought two trekkers ashore in their attempt to transit overland to the South Pole.  An extensive search by the governments of New Zealand, Norway, and the United States, as well as several private vessels, found the empty, damaged lifeboat and several packages of drinking water, but no sign of the yacht or its crew.
•    In January 2013, the passenger vessel SILVER EXPLORER encountered heavy weather and sustained damage while on a cruise from Ushuaia to the South Georgia Islands and the Antarctic Peninsula.  None of the 133 passengers were injured, but four of the 113 crew suffered minor injuries.  The vessel’s next voyage was cancelled so that repairs could be performed.

•    On 17 April 2013, a fire broke out on the fish factory vessel KAI XIN in the Antarctic Ocean approximately 45 mile northwest of Base O’Higgins.  The 97 crew members and workers were rescued by another fish factory vessel.  The fate of the KAI XIN, left adrift and burning, is unknown.

•    On 24 December 2013, the passenger vessel AKADEMIK SHOKALSKIY became beset in Antarctic ice near Cape de la Motte.  The Chinese research icebreaker Xue Long and the Australian research icebreaker Aurora Australis rushed to the rescue.  The Chinese vessel also became beset.  The Australian vessel stood off so as to avoid the same fate. On 2 January 2014, the Chinese vessel’s embarked helicopter was used to ferry the 52 passengers from the AKADEMIK SHOKALSKIY to the Australian vessel.  The passenger vessel and the Chinese vessel freed themselves of the ice on 7 January, shortly before the US Coast Guard icebreaker Polar Star was due to arrive on scene.

•    On 12 July 2014, the US Coast Guard icebreaker Healy diverted from its National Science Foundation research mission in the Arctic in order to assist a sailboat trapped in the ice approximately 40 miles northeast of Barrow, Alaska.  The sailboat ALTAN GIRL was en route from Vancouver, British Columbia to eastern Canada via the Northwest Passage when it was beset.  The USCGC Healy towed the sailboat through twelve miles of ice to open water.

Polar Excursions
As illustrated by the above summary of recent marine casualties, some of the vessels currently navigating polar waters are not constructed or operated in a manner to meet the harsh conditions.  In addition, some of the operators do not properly take account of the severe lack of adequate charting and infrastructure in those remote areas, as well as the extreme weather conditions often prevailing.  Several commercial passenger ships [and one commercial bulker] have transited the Northwest Passage, so far without significant difficulty (except for the CLIPPER ADVENTURER noted above), but mariners cannot always count on good luck.  Crystal Cruises recently announced that it is accepting bookings for a “once-in-a-lifetime expeditionary voyage” by the passenger ship CRYSTAL SERENITY from Anchorage, Alaska through the Canadian Arctic Archipelago to Greenland and New York, with a scheduled departure 16 August 2016.  Putting aside for a moment the obvious cabotage issues, one wonders at taking yet another non-ice-classed vessel filled with civilians into polar waters.

Next Steps
The IMO’s Marine Safety Committee, at its meeting (MSC 93) earlier this year, approved its portion of the draft Polar Code.  That portion will go before the November meeting (MSC 94) for formal adoption.  The environmental portion of the Polar Code will be considered for approval in October by the IMO’s Maritime Environment Protection Committee (MEPC 67).  It is scheduled to be considered for adoption at the May 2015 meeting (MEPC 68).  If all goes according to plan, the mandatory Polar Code will enter into force on 1 January 2017.
No one is asserting that the draft Polar Code is perfect.  Certain topics, such as ballast water management, have been omitted and there are other topics that could be expanded, such as the provisions addressing manning and training familiarity of navigating officers for polar water operations.  But, the new Polar Code represents a major step forward and should significantly improve the safety of commercial vessel operation in polar waters at a time when such operations are increasing. 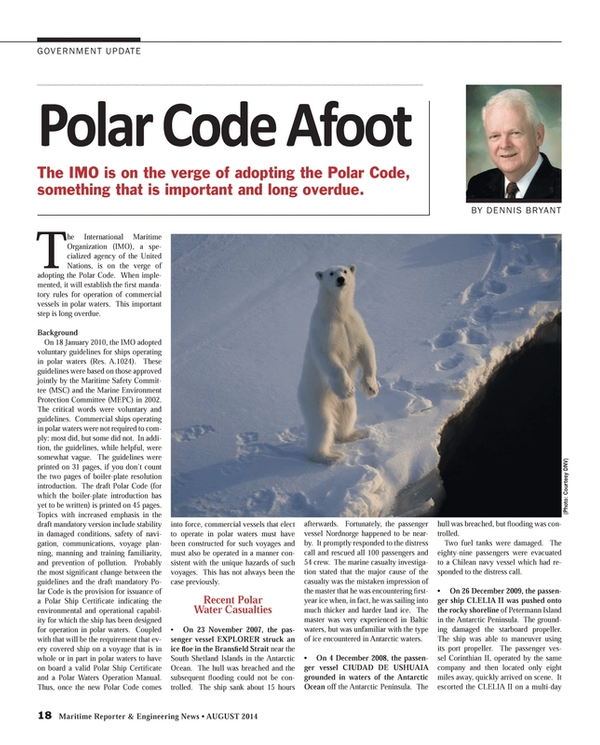