BAE Systems launches the first of four platform supply vessels it’s building for Jackson Offshore Operators, LLC., January 29, 2014. The vessels, being built in Jacksonville, Fla., will support drilling operations in the Gulf of Mexico and reflects the company’s continued growth in U.S. commercial shipbuilding and its support to the offshore oil and gas industry.
BAE Systems Ship Repair is one of the many entities that make up BAE Systems U.S. subsidiary.  Although BAE Systems Ship Repair devotes much of its production capability to naval customers, it also has a robust commercial business, according to Richard McCreary, vice president of Commercial Business Development.
In addition to maintenance, repair, overhaul and conversion (MROC) work, McCreary says the company is also heavily involved in new construction projects.  “We have four major new construction programs underway—two in Jacksonville and two in Mobile.  At our Jacksonville Yard, we are constructing four platform support vessels (PSVs) for Jackson Offshore, as well as a tug for SEACOR. At Mobile, we have two PSVs building for GulfMark Offshore, and a subsea construction support vessel for Oceaneering International.
The Jacksonville and Mobile yards are well situated to support the “oil patch” business in the Gulf of Mexico as well as construction and repair of ships involved in the Jones Act trade, he says.  All of the work was competitively bid and were awarded as firm-fixed price contracts.  McCreary says BAE Systems is uniquely situated with capacity and capability to handle larger value programs. “There are a couple of competitors that can do the same kind of work.  However, BAE Systems’ reputation and financial security are major differentiators, and big factors in the company winning the work.”
McCreary says the company is “blessed in our locations.”
While there are some channel restrictions, the Mobile facility has a 46,000 ton dry dock.  “We can handle larger work, up to drill ships, that most of our competition cannot.”
When the eastern part of the Gulf of Mexico is opened for drilling in around 2018-2020, McCreary says BAE Systems will be well situated for new work.
At Jacksonville, McCreary says the yard has an eclectic mix of business, from Navy surface combatant overhauls in the drydock to mega-yachts.  “The commercial new construction is a nice balance to our Navy work.”
Both Mobile and Jacksonville are doing MROC work for commercial customers, he says.
The two drydocks in Mobile and one in Jacksonville, and the ability to take larger vessels, are significant assets.
McCreary says the company is in constant contact with its customer base in the major oil and gas centers of Houston and New Orleans, and elsewhere on the east coast.  While the company has long term relationships, most customers do not make long-term contractual commitments.  “We’re only as good as our last job, and we have to be very competitive to win the next one.”

Growing Talent
The size and stability of BAE Systems has also attracted a quality workforce.  “We have as skilled a work force as anyone in this industry,” McCreary says.  “But we’re continually looking for skilled people.”
McCreary says there is stiff competition for welders all along the Gulf Coast.  “The average age of a welder is 55 years old.  They are extremely hard to find.  We have to grow our own,” McCreary says.
“It’s important to maintain consistent work load to be able continue to employ same group of people, so you don’t have those gaps, or devote time a resources to training replacements,” he says.
BAE Systems is proud of its training programs, and is committed to giving its workers new and better skills and certifications.  But, McCreary says, sometime jobs must be segmented where someone is trained for a specific task only.  “It’s not the most efficient cover, but it can help cover the skill gaps.
But he says, the two yards enjoy significant advantages because of the parent company’s stability and the continued investment into capability and capacity.  “Mobile and Jacksonville are two of the best capitalized second-tier yards in the country.”
BAE Systems also does commercial work in San Francisco, as well as Navy repair and modernization in Norfolk, Mayport, San Diego and Pearl Harbor.
While the yards are busy, McCreary says the company is “actively engaged in extending our backlog.  We’re diversifying our portfolio.” 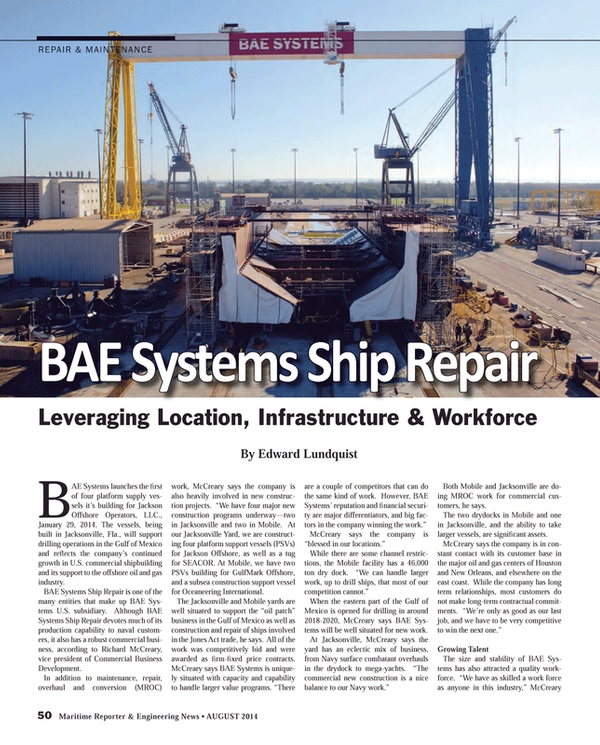