Indian Shipbuilding on the Road to Recovery

Indian shipbuilders buoyed by a renewed political will, a plan and funding to help the industry recover.

It has been a long wait for the 28 shipbuilders in India to finally catch sight of  opportunities to sail back into the better financial waters. The newly elected Narendra Modi’s BJP’s party brought in a strong stable government, the first in nearly 30 years, and has given an unprecedented, massive boost in promoting Indian shipping in its recent Union Budget.
Most industry stakeholders consider this to be a very positive and unexpected turn of events, as the previous succession of governments that have been largely unsupportive of all matters maritime, despite the industry crying itself hoarse for a level playing field to enable it to face cut-throat overseas competition.
The Indian shipbuilding industry has been in shambles: Without exception, it has been downhill for nearly all ship builders over the last decade not only because of the economic downturn but mostly because of the lack of support from the government. The Indian shipping tonnage too has been hovering at around 10 million DWT for several years.
Because of the lack of financial and governmental support, many ship yards have been unable to prosper. Also, there has been hardly any encouragement for Indian ship owners to place orders for new buildings in India. Left to fend for themselves in the past six years, Indian shipyards have seen their share of the global order book slip from 1.3 percent to less than 0.1 percent.
Of the 28 shipyards eight are government owned and 20 are in the private sector. Despite recent poor performance, India has a number of logistical advantages in its favor, including a vast 7,517 km coastline for shipping, a strong labor force and the low cost of labor. These advantages, however, are outweighed by the lack of high capacity shipyards, lack of trained engineers and skilled labor and almost total absence of government support and initiative.
In India, most classes of vessels are allowed to be imported into the country without payment of custom duty, unlike most other shipbuilding countries. Indian shipyards continue to be outbid by Chinese and South Korean builders because of the cost differentials arising out of this lack of support for the industry.
Forty percent of India’s international cargo that used to be moved on Indian bottom two decades ago has come down drastically to just 8% and the country continues to lose foreign exchange by way of freight lost to foreign lines.

Diversification: The Way Out
The industry has been looking at other opportunities in the absence of new building orders, such as ship repair and ship conversions. However since the requirement of infrastructure for repair of ships is much smaller compared to building ships – a large portion of the infrastructure remains unutilized at the Indian shipyards.
“Like many other shipyards we too have switched to undertaking ship repairs,” said M.A. Siyad, Project Manager of Cochin Shipyard, one of the major state-owned yards based in South India. “Though we have a number of orders both from the Indian Navy including an aircraft carrier now under construction, as well as orders from overseas shipowners, we are in the process of setting up a ship-lift facility 130 x 25 m that will have a capacity of 6,000 tons. It is encouraging to note that other shipyards, which have set up ship lift facilities, secured encouraging results including Chowgules’ shipyard at Jaigarh, Dempos’ and Goa Shipyards in Goa and Karwar, all based on the West coast of India.”
The past decade saw the birth of only two major ship yards, the Pipavav in Gujarat, Western India, and that of Larsen & Toubro (L & T) at Kattupalli in Tamil Nadu in South India. But they have ended up facing a slump like the others and are putting up a bold front to improve their lot, much the same as other major private builders including Bharati Shipyard, ABG Shipyard and Modest Infrastructure. The Defense Ministry and the Coast Guard has been able to come to their assistance in the past few years placing orders to meet their requirements.
But Anand Sharma of Mantrana Advisory, a leading consultant in the maritime field points out, “There are plenty of new building orders in the pipeline from the Indian defense sectors. However, the infrastructure with the Indian shipyards is far higher than what can be met by defense new building orders. Hence, defense orders would certainly provide some cushion to Indian Shipyards. It is not going to increase their capacity utilization completely. Moreover for all high-end ships in the defense sector, Indian Shipyards have neither the desired technology nor the know-how to build them.”

Help Arrives
But as all ‘bad things’ too, come to an end, the recent budget of the Narendra Modi’s Government has brought back the lost smile on the faces of India’s ship builders. The trade and industry pundits are elated having Narendra Modi as the prime minister, since he has been instrumental in bringing about vibrancy in his home state – Gujarat, where he was the Chief Minister for over two decades until he relinquished the post to take over as PM last month. The country’s focus is on him for replicating the model of his home state for the rest of the country in general and in ship building and repair industry in particular.
Several measures and policy changes have been brought into place in the budget of July 10, 2014. The Finance Minister Arun Jaitley announced in his budget speech that the government will unveil a comprehensive policy to promote Indian shipping and ship building. He has promised to do away with the plethora of taxes that hound Indian shipping. He announced a reduction in taxes for the coastal shipping sector to encourage growth in transport of goods on local routes through coastal ships. The setting up of 16 new ports at a cost of $1.85B and the announcement of putting in place of 24 x 7 customs clearance facility in the major ports as well as a single window facility would greatly facilitate India’s international trade as well as coastal.
A major boost is the project on the river Ganges called “Jal Marg Vikas” (National Waterways – I). This involves developing the waterways from Allahabad in Uttar Pradesh to Haldia in West Bengal covering a distance of 1,620 km to enable commercial navigation of at least 1,500 tonne capacity vessels and help boost capacity hauling goods along the inland waterways. The project is to be completed within six years at an estimated cost of $0.7 billion.

Coastal Shipping
Commenting on the recent budget Anand Sharma had this to say: “Several new building opportunities are likely to come up in the near future as the government plans to shift at least 15% of the cargo transported by road and rail to the coastal and inland waterways. Further, only ships made in India and operated by Indian shipowners will be allowed to move the cargo on the coast which is a welcome move. However, the number of vessels available for coastal movement and inland waterways movement are very small and of low value. Hence, the opportunities arising from that sector would mostly be taken by smaller shipyards in India and to some extent may benefit the large shipyards in India.”
Capt. Sandeep Kalia, Vice President of Indian Coastal Conference Shipping Association said, “For the first time the government has given an unprecedented boost to coastal shipping and inland waterways transport. Today, there are around 638 vessels under the Indian flag operating along India’s long coastline. The government’s plan is to double the cargo transported along the coast in five years, which means there will be a need to double the number of vessels that will have to be built by Indian shipbuilding yards.
To help shipyards come out of the red the government has been in discussion with the Shipyard Association of India (SAI) for formulating measures for funding. Prashant Govil, Advisor to SAI said “We have been in talks with the Ministry of Shipping, government of India for finalizing details on the creation of a fund for ship building. A corpus of $16.7B is to be formed by IDFC with investments from foreign investors, foreign banks and financial institutions. Called the ‘Shipbuilding Development Fund for Low Cost of Capital’ funds from this corpus maybe used to provide shipyards term loans and working capital loans – at interest rates of 6.5%.”
Another proposal is for raising ECBs for Working Capital and Term Loans. For this a financial institution will be appointed as a nodal financial agency with a dedicated window for providing finance to the shipbuilding and shipping sector.
The agency will raise ECBs, and in turn provide loans, with a minimum fixed spread over ECB borrowing cost, for both working capital and long term capital (of say tenure 25 years and a moratorium of 2 years), to the Indian Shipbuilding industry. The proceeds could also be utilized by shipyards for prepayment/repayment of term loans and working capital loans. It is also proposed to allow shipyards to utilize the proceeds of ECBs raised directly, for meeting the requirements of working capital, as well as prepayment/ repayment of term loans and working capital loans. This is in addition to the prevailing ECB guidelines, which allows the proceeds of ECBs to be utilized for capital expenditure only.
There is also a proposal to give shipbuilding an Infrastructure Status. This will help the shipbuilding sector to be on par with those of others countries that enjoy similar status such as long gestation periods and high capital expenditure.
Thus shipbuilding industry in India will be able to access financing at preferential terms (low interest rates and longer terms) as well as avail tax benefits - if infrastructure status is granted to the sector.
The government has set the ball rolling and the industry experts are confident of seeing better days ahead. Having survived the downturn Indian ship builders can no doubt be expected to come out much stronger in time to come. 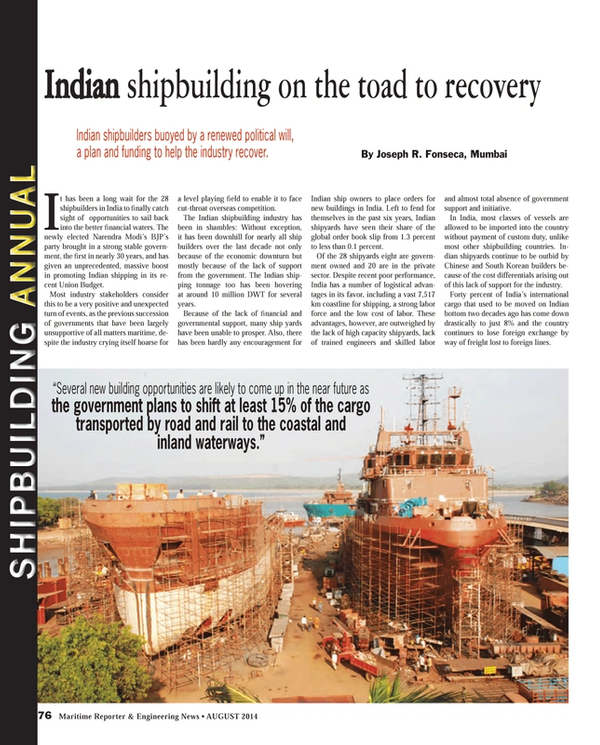 Read Indian Shipbuilding on the Road to Recovery in Pdf, Flash or Html5 edition of August 2014 Maritime Reporter