Frank Foti of Vigor Industrial has steadily embarked on a consolidation of the Pacific Northwest ship construction and repair industry. Starting in Portland in 1995 with about 50 employees, the ubiquitous owner of Vigor has built his business today to more than 2,000 employees in an ever-widening industrial group. During a recent visit to Seattle, he shared insights on his company and the market.

“Vigor is a diversified marine and industrial fabricator and it is a ship repair specialist,” is how Frank Foti, the owner of Vigor Industrial for nearly 20 years, concisely describes his company. “You’re in a shipyard (Vigor Seattle) where there’s a Navy destroyer, a shipyard that is building and repairing barges; and a shipyard that is building and repairing ferries.”
The story of Vigor’s rapid ascension as a driving force in the Pacific Northwest ship construction and repair market is an intriguing one, and one fairly well recorded as Foti has an obvious ease with the media. But the story of Vigor almost never was, as early in his life Foti was embarked on a career in the telecommunications industry. But then his father, who owned a small construction company in Cleveland, became terminally ill and his dying wish was that Foti would come in to run the family business, which Foti reluctantly agreed.
“I was a typical high school kid who grew up one way, his father grew up another way,” said Foti. “I used to turn my nose down to people who got dirty for a living, then I fell in love with people who get dirty for a living when I realized that there was more honesty, more truth out on a scaffolding than there was in the offices that I had spent time in. So my career took a turn where I became a business owner for industrial work. I didn’t know it was going to go there.”
Spend five minutes with Foti and it is apparent he’s not remiss to share his opinion. And while he talks straight and fast, it becomes instantaneously clear that it is not about him. In fact, far from it.
“You see in my office that I don’t have a single picture of a ship; only people,” said Foti. And he’s right, as the office walls are filled with dozens of photos of Vigor workers, past and present, a daily reminder to Foti of what his business is about.
But while he acknowledges the value of the people under his employ, from the start he knew it was his job to build a company beyond the Portland shipyard, a company of sufficient geographic and capability depth and breadth to supply ample opportunity to attract and retain the best people.
“Portland is a destination resort for repair and fabrication, but it has no local market,” said Foti. “Once we shrunk (after he took over the shipyard in 1995, just as the U.S. Navy was transitioning from the 600-ship to the 300-ship navy) and figured out a way to survive on what our facility could offer, the only way for us to generate stable revenue was to go to where the work was; expansion was required.”
And expand he did, with acquisitions as far north as Alaska and most recently the acquisition of Oregon Iron Works, a strategic buy which will launch Vigor into fabrication for industries outside of maritime. In total Vigor owns eight facilities, with all major facilities offering a mix of new construction and repair (except for the new Oregon facility, which is strictly fabrication).
Vigor has been a driver for consolidation of maritime assets in the Pacific Northwest, helping to spearhead what some term a resurgence of maritime activity in the region. “Our consolidation was so that we could attain critical mass so that we could be a large enough company to effectively train, bring in good leaders, provide continuous employment,” Foti said. “That necessity is mother of much creativity.”
“Resurgence is an interesting word, because in a sense consolidation has helped to create the resurgence,” said Foti. “The industry shrank, and now I think you see healthier companies that are poised for growth. There are some solid companies that have always been solid. You have a really great shipyard out here in Dakota Creek that has a reputation well past the Northwest. You have a builder of small boats for the Coast Guard and other commercial owners called Kvichak Marine. These are strong builders that have their own profile outside of the Northwest.”
While Vigor’s Navy work has dwindled, it keeps busy with a mix of commercial and government work (Military Sealift Command); a mix of new construction and repair. “Some level of consolidation combined with a readying for potential work in the Beaufort and Chukchi Sea with Alaska O&G exploration, and I think you’ll see continued resurgence around the construction of fisher/processor boats for the Alaskan fishing trade,” said Foti.

The New Floating Drydock
Early in 2013 Vigor Industrial reached an agreement with Daoda Marine Heavy Industry Company (DDHI) to purchase a new floating drydock for $40 million. At 960 ft. long, with an inside width of 186 ft. and a lifting capacity of 80,000 long tons, it is touted to be the largest floating drydock in the United States.
While the drydock hit some delays (when originally announced the anticipated delivery was March 2014, but it will arrive on the West Coast later this month) when it does arrive there is business lined up and waiting.
The new drydock, set to be stationed in Portland, will be 300 feet longer than the largest drydock Vigor currently owns, and it will allow Vigor to service the incoming generation of the U.S. Navy’s Military Sealift Command (MSC) dry cargo/ammunition ships, which are replacing some smaller MSC ammunition, combat stores and fuel ships. The drydock will be large enough to service private vessels including post-Panamax cargo ships and cruise ships. The increased capacity will also help Vigor meet growing demand from the Arctic as oil and gas exploration and other ship operators take advantage of longer ice-free summers. 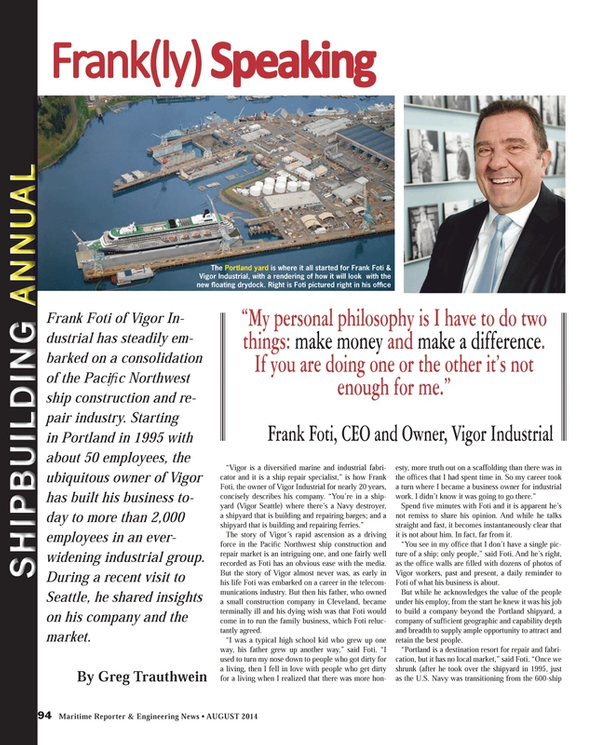