Kloster Cruise Limited, Coral Gables, Fla., has ordered two new 40,000-ton, 1,220-passenger ships, to be launched in late 1992 and early 1993 as part of the company's Norwegian Cruise Line and Royal Cruise Line fleets. The cruise ships will be built in St. Nazaire, France at the Chantiers de l'Atlantique shipyard.

This development in Kloster's new building program follows the company's recent announcement that a new 212-passenger ship will join the Royal Viking Line fleet in February 1992.

The two new mid-size ships will be built to offer a range of cruises from three- and four-day Caribbean itineraries to 14-day European and worldwide cruises.

Spacious cabins and an a la carte restaurant will distinguish the yetunnamed vessels, designed to blend the intimacy and exclusivity of mid- size ships with the glamour and spectacular entertainment of larger liners. Petter Yran of Norway, one of Scandinavia's most distinguished designers, will oversee the construction projects.

Outside cabins will make up 86 percent of the 610 well-appointed cabins on each vessel.

For free literature on the facilities and capabilities of Chantiers de l'Atlantique, Circle 16 on Reader Service Card 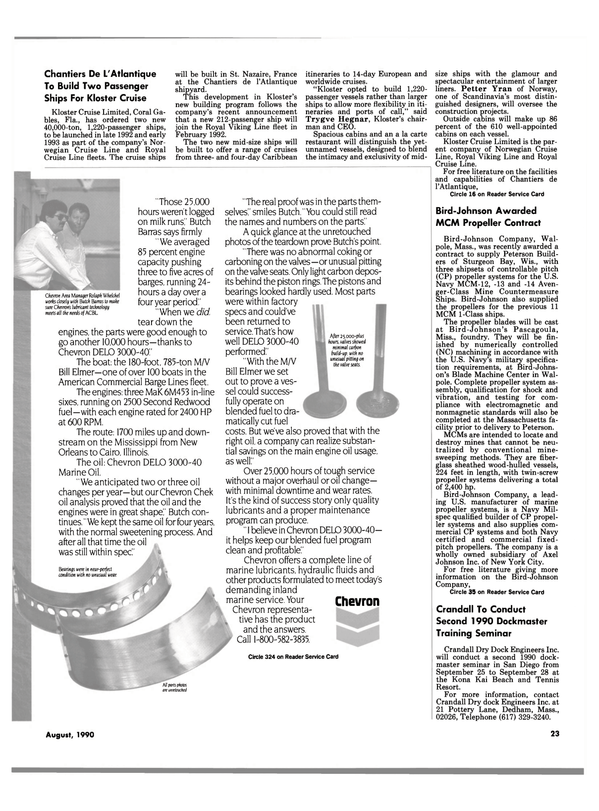