September 24-28, Halifax, Nova Scotia, Canada The 11th International Tug Convention and International Marine Salvage Symposium and Exhibition, or "The Big One" for short, will be held at the World Trade & Convention Center in Halifax, Nova Scotia, Canada, from September 24 to 28, 1990. This will mark the first time that the two shows have been held together.

According to the show's promoters, this combined event will be the world's largest international gathering of executives involved in the tug, towage and salvage business.

It is the first time in many years that the International Tug Convention is visiting Canada and it is also the first time for several years that a major marine salvage conference has been held in North America.

The International Tug Convention has been held biennially all over the world during the past 20 years. To date, well over 3,000 delegates have attended these meetings which have been held in London, Vancouver, New Orleans, Rotterdam, Hamburg, Singapore and Sydney.

The International Marine Salvage Symposium (IMSC 88) was first held in London in 1988 and attracted delegates from 19 countries.

It broke new ground and covered all aspects of marine salvage topics, from artifact recovery through to legal, financial and contractual changes affecting the traditional salvage operation.

The combination of the two events will ensure an enlargement of the scope of the products and services in the related exhibition and will provide delegates to the conference with an opportunity to attend sessions on specific marine salvage topics, as well as the traditional tugrelated subjects. The tug-related sessions will in themselves break new ground. The ideas which have sprung from the convention series has produced significant changes in tug and towage operations and this is reflected in the program of internationally renowned speakers.

6-7:30 p.m.—Cocktail reception at the Maritime Museum.

4:45 p.m.—"Acoustics as an Aid to Salvage Location and Recovery," by Nigel Kelland, operations director, Sonardyne Ltd. 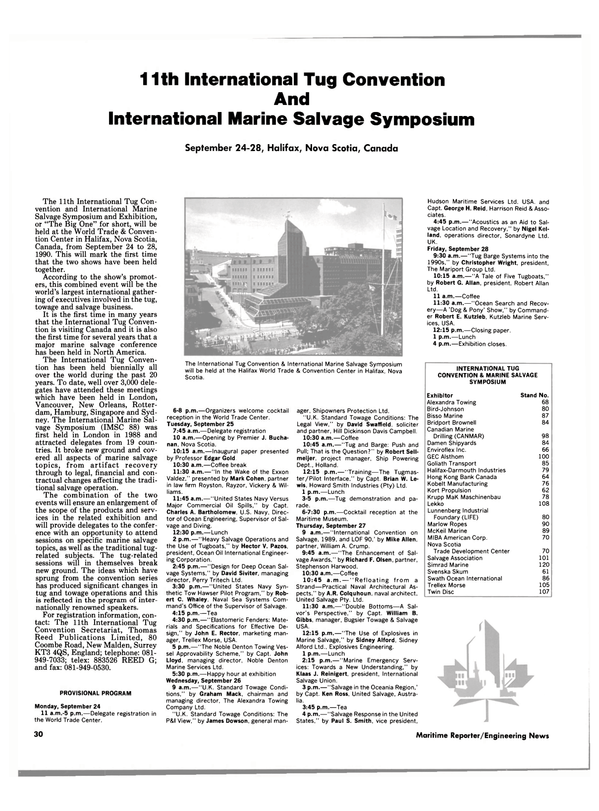