A conscious decision to expand the activities of the American Waterways Shipyard Conference was made by the conference members on March 10, 1989, so that our nation's small and medium-sized shipyards could strengthen their voice in Washington. To achieve that goal, AWSC increased the size and responsibility of the conference staff with the clear intent of working toward increasing activities and expanding membership in the organization.

In June of 1989, AWSC hired a new director, and in August, a permanent, full-time assistant to the director was hired. Conference members voted to increase their assessments in order to adequately fund the new commitment to a more active organization.

Legislative Committee—to analyze legislative proposals and develop appropriate responses to those proposals; Membership and Member Services Committee—to concentrate on member recruiting and retention, as well as oversee present AWSC services and develop new services; and, Military and Government Contracts Committee—to focus on expanding AWSC's role in assisting members who repair and construct government vessels, as well as to seek new opportunities for small and medium-sized shipyards in the area of government contracts.

AWSC set as a top priority spreading the word about all that AWSC has to offer both current and prospective members. An undeniable challenge is expanding membership.

Of over 300 small and medium- sized shipyards located throughout the country, only about 20 percent enjoy the benefits of being represented by a Washington, D.C.-based organization established to respond to their needs.

Among prospective members there is a common misconception that AWSC exclusively represents small shipyards involved in the construction and repair of tugboats and barges. There is little understanding of the diversity of the work done by conference members.

Because of their smaller size and the kind of work they do, however, they share many of the concerns of the other small and medium-sized yards which make up the conference membership. The conference represents shipyards presently constructing both oceangoing barges and inland hopper barges. Several members are converting offshore supply vessels to fish processing vessels and dinner cruise vessels. Other shipyards concentrate strictly on the repair and construction of fishing vessels, while still others concentrate on passenger vessels and yachts.

Many AWSC members are becoming increasingly involved in government work, building and repairing vessels for the Coast Guard, Corps of Engineers, MarAd, NOAA, and the Navy. Several shipyards are not involved in construction at all.

Some of these members focus on topside repairs; some are primarily gas-freeing and tank-cleaning facilities.

The common threads which bind together this group are their commitment to AWSC and AWO, and their desire to participate actively in the decision-making process in Washington, one which is often too cumbersome for the small businessman to influence alone. The shipyards are strong. They have survived the severe depression of the mid-1980s, and are slowly beginning to feel the recovery.

All in all, this adds up to an industry association that is extremely diversified in its individual members' operations, but uniquely unified in its mission: to promote, protect and defend the small to medium-sized shipyard industry.

In the last year, 58 shipyards in New York, Virginia, Mississippi, Louisiana, Texas, Washington, and California were visited by conference staff. In those visits, it became clear that the conference enjoys strong support from its members, and of those prospective members visited, it was obvious that most appreciated and understood the need to belong to a national trade association representing the interests of their industry.

Commensurate with reaching out to current and prospective members, AWSC has now completed the task of computerizing the database of the conference's Annual Shipyard Survey, assuring the accuracy of the results and greatly improving the efficiency of publishing those results.

The conference is also exploring the development of an insurance program to assist members in addressing the growing cost of USL&H Compensation Act coverage; the possibility of developing a guide to assist members in meeting the quality assurance demands of their customers; and, the publication of a national shipyard directory to provide the marine industry with a comprehensive guide to shipyards capable of meeting its needs.

In addition to these expanded and improved member services, AWSC has stepped up its activity in legislative and regulatory issues. On the legislative front, the opposition to efforts to weaken the Jones Act continues to dominate the agenda.

Development of environmental issues must be monitored, and their impact on the shipyard industry must be defined as these issues are developed.

On the regulatory front, the Coast Guard's efforts to adopt the International Guide for Safety of Oil Tankers and Terminals (ISGOTT) as domestic regulation controlling any facility involved in tank-cleaning and gas-freeing operations must be defeated. AWSC has developed a safety manual for these operations which better address the Coast Guard's concerns and more adequately relate to our domestic industry.

In addition, new measurement regulations intended to implement the International Convention on Tonnage Measurement have added about $1,000 per vessel to the costs of constructing new domestic barges. AWSC has secured immediate changes in the new procedure which reduces the costs in the short term, but must seek a permanent statutory solution. Staff changes at OSHA have slowed the work of its Shipyard Employment Standards Advisory Committee and the development of vertical standards. The conference has been working on this for several years, and must insist that this work continue.

Finally, AWSC has joined in a lawsuit seeking to reverse the Coast Guard's interpretation of the American ownership provisions of the Anti-Reflagging Act of 1987. The Coast Guard's decision would allow any vessel engaged in our domestic fishing industry prior to the Act's cutoff date to be sold to a foreign entity without losing its domestic trading privilege. This interpretation completely undermines the intent of Congress to Americanize our domestic fishing fleet.

The new AWSC has evolved into a stronger, more active organization representing the interests of our nation's small and medium-sized shipyards.

The conference offers valuable member services and the opportunity for its members to actively participate in decisions which could impact their bottom line. Now the key rests in continuing to build a stronger membership and then a stronger industry. Of course, the conference's efforts to expand can only succeed with the continued and enthusiastic support of the general membership of AWO. • *Editor's Note: On June 21, the American Waterways Shipyard Conference appointed Robert F. O'Neill as the new director, AtVSC. Mr. O'Neill replaces Cornel Martin.

who served in the AWSC post for one year, and who is now AWO's vice president- Southern Region.

Mr. O'Neill has over a decade of experience on Capitol Hill, having served as a professional staff member to the House Subcommittee on Science, Research and Technology since 1982. Prior to that, he acted as a legislative assistant to Representative Doug Walgren, and as a political consultant. He served in the military in the U.S. Air Force Intelligence Service.

Mr. O'Neill is a graduate of Wheeling Jesuit College. 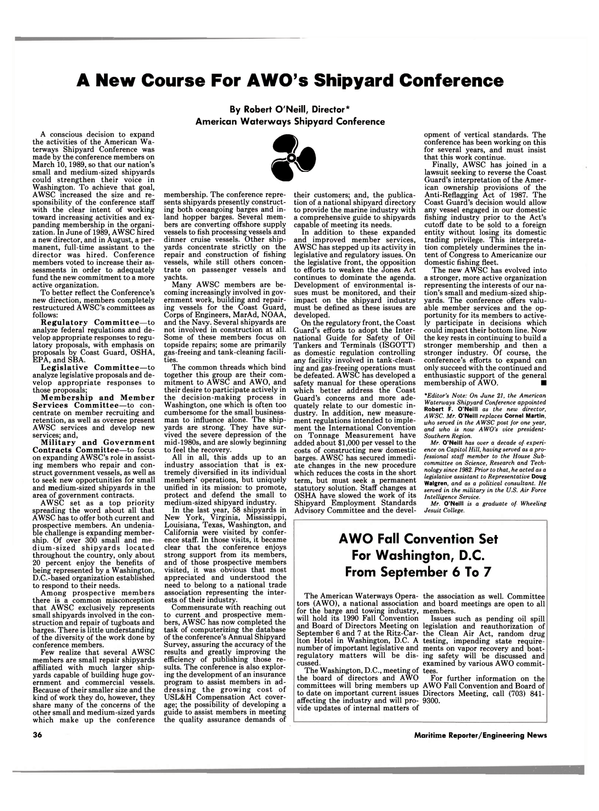