Although the legislation has yet to be approved, it appears that all oceangoing tankers operating within U.S. waters will have to be equipped with a double hull by 2015, according to a recent proposal by a joint House-Senate conferee committee.

A joint committee made up of Congressional conferees recently unanimously voted to include a double- hull provision in pending oil spill liability and compensation legislation.

The conferees included the following stipulations as part of the double-hull requirement: •New tankers built in the U.S.

must have double hulls; •All tankers trading in the U.S.

must have double hulls by 2010; •Single-hull tankers operating to deepwater terminals or in lightering operations 60 miles off the U.S.

coast will be phased out by 2010 and those with either a double bottom or double sides by 2015; •A sliding scale will be used from 1995 to 2000 to phase-out single- Circle 245 on Reader Service Card hull tankers; beginning in January 1995, all tankers 28 years old or more will be excluded from U.S.

domestic and inland waterways trades would not be exempt from the double-hull requirement.

The oil spill liability and compensation legislation is expected to be passed by both Houses and approved by President Bush later this year. 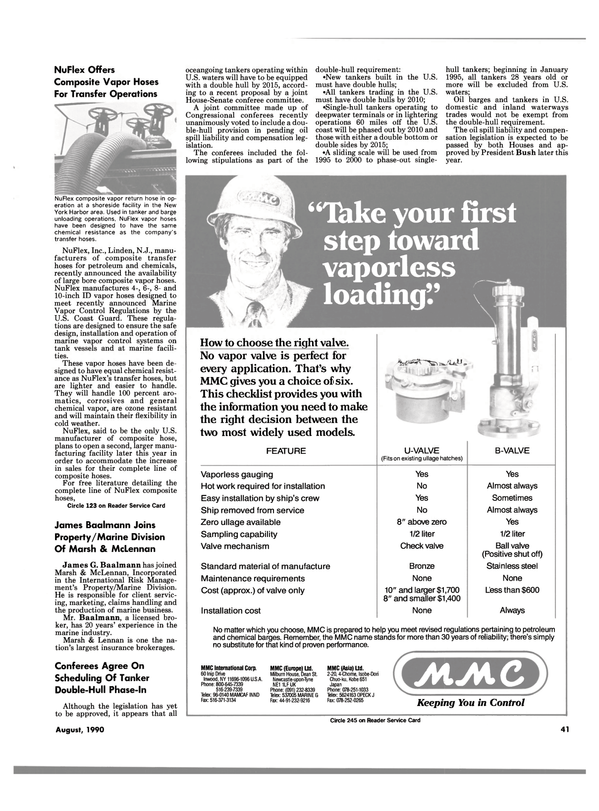