The grounding of the Exxon Valdez and the resulting oil spill caused the Coast Guard to reevaluate the existing regulations governing the movement of tanker traffic on Prince William Sound. Soon after the spill, pilots were required to escort the tankers past Valdez Arm and into the open waters of Prince William Sound. These expanded pilot duties required that a new pilot boat capable of operating in extreme winter weather conditions be brought on line.

Middle Rock Inc., a Homer, Alaska, pilot association, already owned two pilot vessels. Built by Munson Manfacturing, Inc., Edmonds, Wash., the 26-foot Silver Bullet and the 55-foot Katmai were designed to operate in rough but relatively protected waters. What now was needed was a vessel that could operate safely and comfortably in exposed waters with seas running to 25 feet, winds to 70 knots and temperatures well below zero. Working with the pilots, the vessel Columbia was built by Munson to handle these arduous conditions. Delivered in the spring of 1990, the 65- by 20-foot vessel is equipped with twin Caterpillar model 3412 diesels, stainless steel prop protection skegs, 747 airplane tire bumpers, deluxe accommodations for four men, double bottom sections and many other features.

This increased concern for protection from and response to oil spills has also created an opportunity for Munson to design and construct a wide range of oil containment and recovery vessels. These vessels all work with oil containment booms in one way or another.

The boats range in size from 18-foot open skiffs to 72-foot oil skimmers.

The first category of boats are the boom support skiffs. These outboard- powered boats, ranging in size from 18 to 21 feet, are used for towing and tending small quantities of harbor type booms, cleanup of small spills utilizing oil absorbants and various spill cleanup and facility support duties. The units are constructed from 1/4-inch aluminum plate and are based on the Munson Seasled hull design. The Seasled hull has a flat bottom aft, slight V forward square bow design and is favored because of its stability. This vessel is typically outfitted with a tow post, self-bailing double bot- torn, standup center steering console and either one or two outboard motors.

The second type of pollution control boats are the boom deployment and facility maintenance boats.

These vessels typically range from 24 to 32 feet and allow for true multi- mission capabilities which may include deploying booms from dockmounted boom reels or skimming and storing recovered oil from small portable deck-mounted skimming systems. Vessels of this size are commonly used to set anchors and maintain permanently installed booms as tankers and barges are moved in and out of the permanent booms' perimeter. When outfitted with a bow door, 500 to 1,000 feet of foam-filled boom can be carried on deck and quickly deployed in the event of a spill. In addition to pollution control, other duties may include water quality monitoring, security, search and rescue, personnel transport, and general dockside maintenance.

The third group of vessels range from 34 to more than 70 feet. These boats are designed to carry onboard collapsible containment booms mounted on reels or large quantities of foam-filled booms stacked on deck. The size of these vessels allows for utilization of a wide range of large oil skimming or pumping systems to be operated from the decks.

Recovered oil can be stored in onboard tanks, towable bladders, or bladders laid on deck. Both aft house and forward house configurations are built. The house aft design is based on the Munson Hammerhead square bow hull incorporating a bow door. This layout is best suited for a rigid boom stacked on deck and deployed through a bow door. The house forward design is based on the Munson Hammerhead round bow hull and is preferred for collapsible boom reel systems mounted on the stern. These vessels vary widely in size and power. The type, size, and amount of boom to be installed dictate hull size. Vessel power can vary from twin outboard motors to a pair of high output diesel engines coupled to conventional shafting and propellers. The size and weight of the boom as well as the response area and response speed also play a major role in power and hull selection. If the vessel is to be outfitted with a containment boom reel system, hydraulic power is required. Since full control of the vessel is needed under deployment situations, it can be undesirable to pull hydraulic power off the main engines. Hydraulic power is usually supplied by a separate dedicated engine and pump.

The fourth category of oil pollution control vessel is the single mission oil skimmer. Oil skimming vessels come in all shapes and sizes, utilizing literally dozens of systems for removing surface oil. Most are reasonably effective in calm seas. A few are effective in a moderate seas and fewer still are effective in heavy seas. Some of the basic skimmer technology includes belts, disks and mop skimmers.

Vikoma International based in England has been a world leader in the development of all forms of oil pollution control equipment. Vikoma has recently licensed Munson to produce its successful 32-foot Harbor Scavenger disk skimmer in the U.S. The Harbor Scavenger can recover up to 10,000 gallons of oil per hour and has an effective system for handling small oil debris and floating trash. The Harbor Scavenger will be marketed through Chemical Processors Inc. (CHEMPRO), a division of Burlington Environmental Inc., based in Seattle, Wash.

CHEMPRO represents Munson in the oil pollution control industry and has worked closely with the company and industry to develop Munson's line of single and multipurpose vessels.

Many organizations in the oil pollution control industry are opting for vessels that utilize rigid oil booms attached to the hull to guide oil back to pump/skimmer systems as the vessel moves forward. The boom is attached to the vessel near the stern and is held forward and away from the vessel with outriggers.

This allows the vessel to cover a wide area. Oil trapped inside the sweep area of the skimmer moves aft as the skimmer moves forward and eventually is trapped near the corner where the boom is attached to the vessel. A pump or skimmer suspended from a crane pumps recovered oil into holding tanks on the vessel.

Shell Oil Company has taken this a step further with the development of a very large system based on this vessel for use on the north coast of Alaska. The skimmer vessel is actually a 400- by 100-foot oil barge which is towed by a tug. The outriggers are actually a pair of Munson 36-foot boats which position a large Norwegian oil trawl to form a sweep width of several hundred feet. This industrious effort is setting an example that will be followed by others.

Although a major oil spill may currently be beyond man's ability to quickly and totally contain and recover to the satisfaction of the general public and many regulatory agencies, we see a very serious and admirable effort being made by professionals charged with the prevention of spills and the quick and costeffective cleanup of spills to have the right equipment at the right place at the right time.

For a free brochure detailing the full line of workboats from Munson Mfg., Circle 101 on Reader Service Card 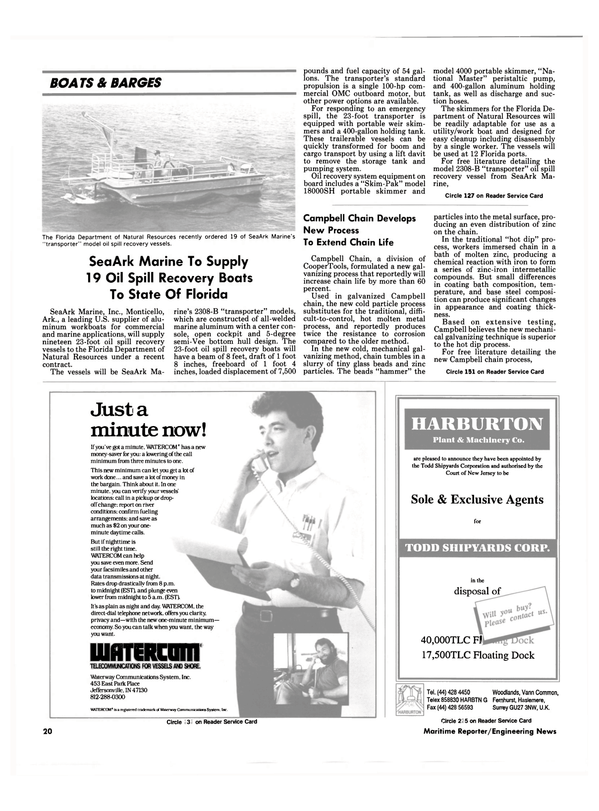