Megayacht style and luxury have come to houseboats with the construction start of the Webb Tide II, a 124-foot, all-aluminum houseboat/ yacht designed by David Carambat Marine Design, Covington, La.

The trend-setting boat is now under construction at Freeport Shipbuilding, Freeport, Fla., for Dudley Webb, owner of the Jamestown Resort Marina on Lake Cumberland in Jamestown, Ky., where he operates a fleet of rental houseboats.

Mr. Carambat said: "While the owner wanted something bigger and better than the typical 70-foot houseboat common to the area, he did not want the complexity or expense of an oceangoing yacht. He was emphatic that the boat should have the sleek lines of a megayacht, yet it had to retain the desirable characteristics of the traditional American houseboat." Those characteristics are maximum space utilization, low freeboard for easy access to the water, shallow draft, and external propulsion power for ease of maintenance, and noise reduction.

The design features two closed decks. The first deck includes a 690- square-foot salon with an entertainment center, including a fireplace.

Forward are three spacious guest rooms for seven with private bathrooms, an office, laundry, and hobby room for the owner. The aft deck includes partially covered fixed seating, a swim platform, the engine "box," and storage for water jet bikes or other water sports equipment.

The second deck boasts a 414- square-foot master stateroom complete with fireplace. Forward is a 575-square-foot dining room and den. This deck also includes a sun deck forward, and a private deck at the rear of the master stateroom.

Another feature of the second deck is the pilothouse which will include advanced technology electronics and a futuristic Carambatdesigned "hula hoop" helm. The hubless stainless steel loop will be supported by two sheaths which will house the pulleys and serve to steer the boat.

The upper deck will include a full pilot's station and a helicopter landing pad.

The Webb Tide II is expected to travel at about 14 knots. Her three high thrust Traktor II water jets will be driven by three Caterpillar 3208 diesel engines developing a total of 1,125 hp.

Another unusual feature for a houseboat is the use of bow and stern thrusters.

Overall, the Webb Tide II will be 124 feet in length, with a 24-foot beam, and 14-foot depth. Normal operating draft will be two feet. The houseboat will have a total of 3,340 square feet of enclosed space, and 1,735 square feet of open deck space. She can carry 800 gallons of fuel and 600 gallons of fresh water.

Electrical power will be generated by two Cummins 50-kw generators.

For free literature on the facilities and capabilities of Freeport Shipbuilding, Circle 21 on Reader Service Card 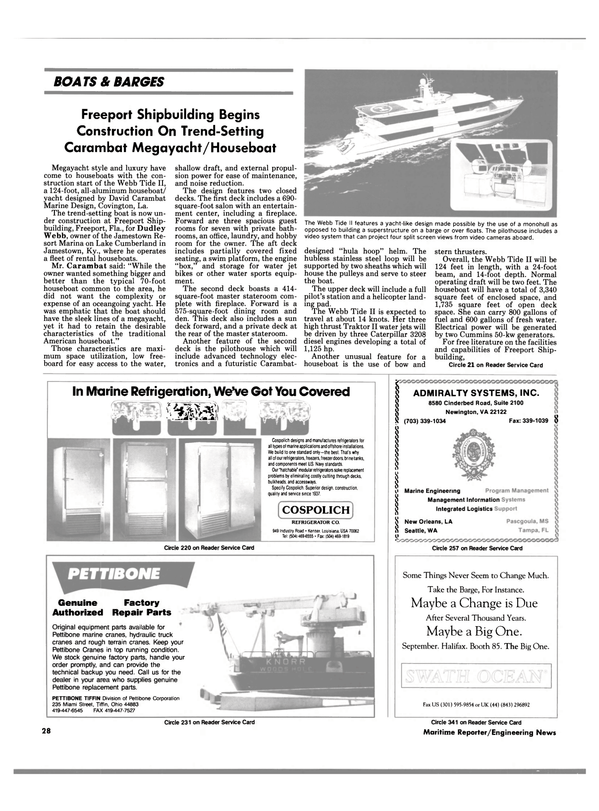