The Endeavour Class tankers, also known as the Millennium Class, are the first crude-oil carriers being built for the Alaska trade in compliance with the federal Oil Pollution Act of 1990. The first tanker, the Polar Endeavour, arrived in Valdez, Alaska, on its maiden voyage in July 2001.

The new Polar Discovery tanker will join the Polar Tankers fleet in 2003. and Polar Resolution will enter the Alaska trade this summer. Polar Adventure will be delivered in late 2004, followed by the fifth ship, the Polar Enterprise, in 2005.

The Endeavour Class tankers are being built to meet and/or exceed existing and proposed environmental regulations and are setting new standards for innovation and environmental protection.

They were designed specifically for the transport of crude oil from Valdez, Alaska, to the West Coast of the United States, through some of the most severe trade routes in the world. The ships also will deliver cargo to Hawaii.

The tankers are built with double hulls, which exceed regulatory requirements, as well as two independent engine rooms, twin propellers and twin rudders. The Endeavour Class vessels will isolate cargo, fuel and lubricating oils from the ship's side by ballast tanks or void spaces. The vessels also will meet pending regulations for air emissions from engines, and are painted with tin-free anti-fouling paint in deference to proposed regulations. 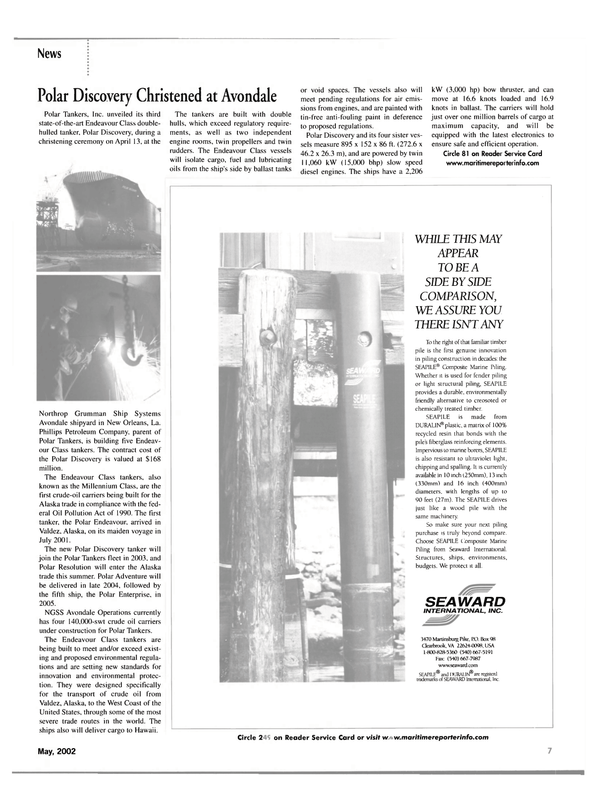 Read Polar Discovery Christened at Avondale in Pdf, Flash or Html5 edition of May 2002 Maritime Reporter