A number of commercial and regulatory factors have contributed to growth in the RoRo ship upgrading and conversion market over the past year, particularly in the North European arena: The abolition of tax-free sales on ferries in intra-EU traffic forced shipowners to find new sources of revenue.

A declining number of passengers can be countered by converting ships to carry more cargo: for example, by reconfiguring car decks or exploiting former passenger cabin and amenity areas to accommodate more trucks and trailers — and fewer cars.

• Continual search for higher profitability from existing assets rather than investment in new tonnage dictates maximization of cargo capacity and optimisation of handling to speed traffic flows and shorten times in port. A conversion to allow loading and discharging on two levels may be considered, for example, and the retrofit of auto-mooring equipment.

• Trade within the European Union has increased and demanded more cargo transportation capacity.

Increasing road congestion and air pollution call for less-polluting transport solutions. An EU program aims for improved inter-modal freight services, easing the movement of cargo between land, river and sea. and stimulating shipowners to seek more flexibility and efficiency from their fleet units.

• Competition from new players entering an arena, such as the Baltic, influencing established ferry operators in the region to execute upgradings or conversions to sustain business.

Swift and cost-effective upgradings/conversions to suit a ship for a different service, freight mix or terminal — or to meet new safety rules — are valued by RoRo passenger and freight ferry operators in changing market conditions. Such projects help to maintain or increase revenues on an established route or to redeploy tonnage in more profitable trades.

Tapping experience from what it claims is the world's largest installed RoRo equipment base. MacGREGOR has executed numerous modernization and conversion projects — often on a turn-key basis embracing initial study, technical solution, design, manufacturing, installation and commissioning. Specialist teams aim to eliminate or minimize downtime by performing as much work as possible while the ship is in service.

Participation by MacGREGOR as an invited specialist in the post-Estonia disaster committee contributed to the Nordic Rule proposals — covering the strength, securing and locking arrangements for bow doors and visors — subsequently adopted by the International Association of Classification Societies (IACS). These addressed the first line of defense (preventing water from entering the vehicle deck).

MacGREGOR has since supplied inner bow doors and carried out bow reinforcements for numerous ferries.

In tackling the second line of defense (improving the ship's survivability if water enters the vehicle deck), the company has undertaken numerous retrofits of flood control doors on RoPax ferries.

Dividing the car deck into watertight compartments with longitudinal or transverse barriers is an efficient way of improving the survivability of damaged RoRo ferries. Flood control doors prevent the free water from spreading over the whole car deck, and thus decrease the total free surface effect and its potential to capsize the vessel.

Side-stowing and top-stowing jalousie types as well as hemicyclic and telescopic doors can be selected from a MacGREGOR portfolio developed to minimize loss of cargo space, operational interference, first cost and weight. Reliability and low maintenance demands were also sought by the designers. Effective 'defense barrier' hardware is vital but some RoRo ferry casualties have underlined the importance of owners and crews being committed to a rigorous operational regime and to maintaining equipment subject to arduous duty. A pro-active approach is urged by MacGREGOR.

Operators can take advantage of continual equipment and system refinements.

Upgrading hydraulic or electric systems, for example, is a common option as original equipment ages and components needing replacement become more difficult to source. These can be replaced by contemporary equivalents or by more modern alternatives.

A typical upgrading is the replacement of a manually-operated system by an electro-hydraulic PLC-controlled system, which, via push-button operation, controls the sequences and leaves the PLC to check the signal when the operation is completed.

A new development proving attractive for RoRo ship newbuildings as well as retrofit projects is MacGREGOR's COREX panel for creating fixed and hoistable car decks/ramps. The stainless steel sandwich construction yields a significantly reduced profile (approximately one-third the depth) and about half the weight of an equivalent conventional steel panel.

The resulting lower lightship weight, reduced molded depth and increased stability can be exploited to maximize the operational flexibility of a RoRo ship and extend payload configurations.

Weight reduction was a prime factor in Sams0 Linien's decision to retrofit lightweight COREX panel-based hoistable car decks to its small vehicle/passenger ferry Sam-Sine. A larger free height above and below the hoistable car deck was also sought. Replacing the existing hoistable deck with a 98 x 13 ft. (30 x 2.4m) COREX version secured a weight reduction of 10 tons and extra free height on the main vehicle deck. The Danish owner can also anticipate lower maintenance costs from the stainless steel construction.

Ships with conventional car decks and a trailer deck free height suitable for accompanied trailer traffic can be converted to take unaccompanied trailers or to accommodate higher trailers by installing COREX decks. The standardization and modularity of a car deck built from COREX panels foster short lead times for conversion projects, says MacGREGOR, and the containerfriendly decks and associated components can be shipped pre-assembled or for final assembly close to the customer.

Hyundai Heavy Industries ordered COREX panels for the hoistable car decks and ramps of two Seapacer-class RoPax ferries booked by the Swedish owner Stena RoRo. COREX panels were selected for the car decks because of their impact on lowering weight and their significantly reduced thickness compared with conventional car decks.

The latter characteristic enabled the designer to meet the owner's strict specifications for maximum free height on the cargo deck without compromising the stability of the ship. 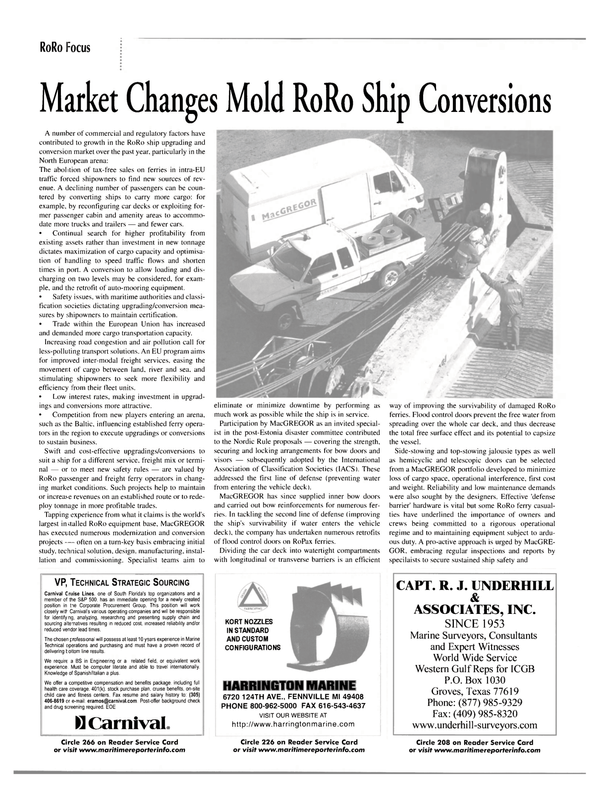