The process of bioremediation of waste oil through patented biodispersion technology, consists of a breakthrough in ballast water treatment, which has been discovered via research based on the evaluation of SpillRemed (Marine), which was developed on the basis of biodispersion technology for remediation of bilge water on boats and ships in an effort to develop an environment friendly solution to the problem of operational discharges by ships.

A study was conducted on board cruise ships equipped with oil water separators.

SpillRemed (Marine) is considered a suitable replacement to chemical dispersants.

Although in volumes as large as found on such ships, it is not possible to completely remediate the bilge water, by dispersing the oil in the water it will be possible to improve the separation of oil water separators.

The following is a selection of preliminary results based on the research conducted on a variety of ship types.

Introduction According to a United Nations Environment Program survey of 1997, more than 30,000 mt of oil is released in the oceans every year. Ships contribute a very small share of 12 percent through discharges regulated by the MARPOL 73/78. which has been accepted by most of the maritime and flag nations in the world.

Bilge water stored in the bottom part of the ships does not contribute in this for the simple reason that ships are not allowed to discharge bilge water containing more than 15 ppm of oil.

This has put heavy responsibility on the ship operators. In order to achieve the international standards of discharge, the ships will have to install oil water separators to separate oil and discharge water as per the international guidelines.

The ships will have to keep the waste oil exceeding the above limit in their holds and should discharge only at receiving facilities available at each port.

However, there have been a couple of incidents where these discharges have been made by the ships in violation of the guidelines indicating that these ships may have found it difficult to follow the protocol since it affected their schedule or from operational necessity. Bilge water is probably the single largest source of waste oil produced from maritime activities, and it does not find any special use on shore. Yet it imposes a great burden on the ships and ports for collecting and disposal of the waste oil. Federal bodies like navies have their own facilities on shore where the naval ships can unload their bilge water without ships paying for the facility, but that is not the case with private operators.

The problem of bilge water disposal is same for small boats and their operators as for the bigger ships.

In situ Remediation through Biodispersion Technology In view of such vast amounts of oil present in association with water, there is a need to treat this pollution at source and help reduce the "hidden" overheads incurred in treating oil pollution. Remediation at source needs to have the following properties to be a successful solution: • Should be environmentally safe • Should be Fast acting and remediation should take place in days.

• Should not disturb the existing ecosystem.

• Should be available in a Ready-To-Use (RTU) form • Should not require supplementary addition of nutrients.

• Should require little or no human intervention.

• Should not contain any genetically modified bacteria Products developed on the basis of patented 'Biodispersion' technology developed by Sarva BioRemed is one such solution to the problem by treating waste oil on site without affecting the environment. SpillRemed (Marine) and SpillRemed (FreshWater) can be employed in salt water or fresh water situation respectively.

Both these products are available in a Ready To Use (RTU) form and the treatment does not require any addition of nutrients.

Remediation of Bilge Oil on a Cruise Ship Unlike studies on boats, studies on larger vessels were carried out in three phases namely, bench scale studies, compatibility studies and direct service trial.

Bench Scale Studies Samples of bilge oil were directly collected from the cruise ship during transfer of the oil to the receiving facility. The oil was thick, black, viscous and hot at the time of collection suggesting that a greater component of low boiling point fraction may have been removed during transfer. The thick oil was brought to the laboratory and a small quantity was added to a fish tank containing 20 gallons of salt water The water was aerated using a fish tank bubbler locally available. It was found that the oil became uniformly dispersed in 48 hours of time suggesting that SpillRemed (Marine) was effective on the complex mixture of oil and was under active remediation.

Ship Board Trials The ship board trials were initiated after completion of all the above formalities and the Superintendent Engineer was shown the test reports. A total of 200 liters of SpillRemed (Marine) was supplied to the ship.

Although the ship left New York, the trials actually began on the return journey to Florida.

The bilge water contained 30 percent of oil and the volume was 10 tons of water in 80-ton sludge tank. The volume of SpillRemed (Marine) added was 55 gallons and no aeration was provided. The ship staff reported that there was no visible reduction of oi l. It was also ascertained from the ship that the residence time for remediation by SpillRemed was just four days with fresh additions of waste oil during the period. It is obvious that there was no time given for bacteria in SpillRemed to interact with the bilge oil before it was discharged to the port receiving facility.

Unfortunately, the trials were not continued and it is believed that if the remediation was carried out in the bilge tank containing OWS the amount of oil would have been reduced considerably and load on the OWS would also have been less.

Cost Evaluation In the case of bilge water treatment using SpillRemed (Marine) there is neither installation cost nor any cost of transportation of wastewater. Bilge water is treated at the site itself and if the residence time of bilge water is adequate, the bilge water can be treated on the ship itself.

Unlike bilge water transport cost, which consists of both oil and water, cost of SpillRemed (Marine) is based on the concentration of oil only. One gallon of SpillRemed can treat 10 gallons of oil and works out to be less than $1 for every liter of oil.

It is estimated that bilge water would contain about 10 percent oil of the total volume. Computing this value would indicate the total cost of treatment of bilge water employing SpillRemed (Marine) even on shore in centralized systems.

There is neither need of transportation of wastewater nor any liability when the oily wastewater is treated with Spill- Remed. SpillRemed can thus contribute directly in a most cost effective manner in reducing the oil pollution at source either in the ship itself or at the shore receiving facilities. 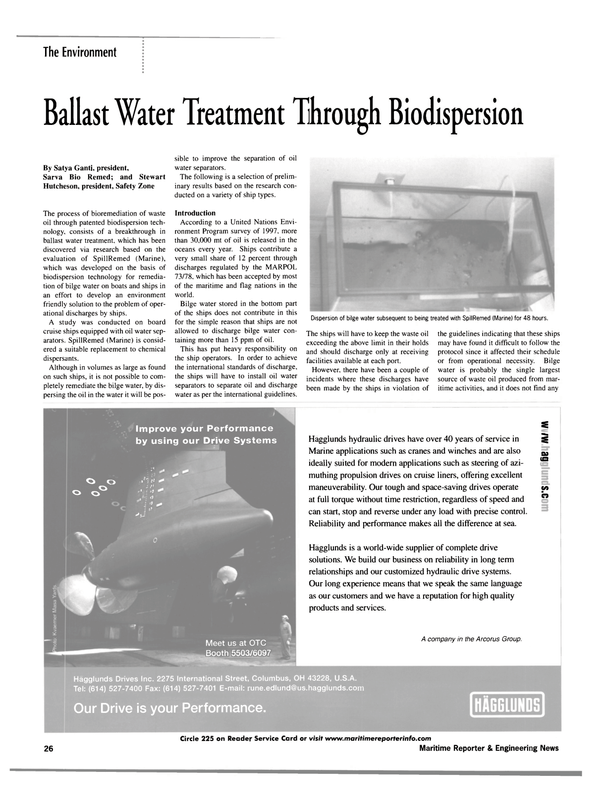 Read Ballast Water Treatment Through Biodispersion in Pdf, Flash or Html5 edition of May 2002 Maritime Reporter