Has the Fast Cat Come to A Halt?

Long hailed for its innovative "fast cat" vessels that were developed by Robert Clifford and Phil Hercus in the 1980's Incat Australia delivered not a new cat last month, but news of an i m p e n d i n g bankruptcy. Could this be the end of the fast cats that have dominated the aluminum shipbuilding world for the past 20 years?

During the first week of March the Hobart shipyard admitted that it was suffering from financial difficulties, and responded by laying off several hundred employees. In fact, according to Australian news sources, the yard has 1,000 less employees than it did one year ago — despite having won an $80 million contract from the U.S. Military for a 101-m high speed support vessel — transporting American troops throughout the Japanese Islands for the next three years. Known as the HSV XI Joint Venture, the vessel is currently being transferred from the U.S. Navy to the U.S. Army for a trial period.

In order to enable its ships to be sold to the U.S. Armed Forces and Government, the company established an alliance with Bollinger Shipyards in Louisiana at the end of 2000. The joint venture, which was created to also further aluminum shipbuilding in the U.S., according to Incat's CEO, Robert Clifford, will not be affecting by the parent company's financial troubles.

In response to curious customers who have been inquiring about the status of the Australian shipyard, a statement was issued at the end of March by Incat's Nick Wells. MR/EN obtained a copy of the statement, which has been excerpted as follows: "For the past 24 months, the commercial market has been slow and Incat have, as a private company, tried to maintain a high output capability, to take advantage of anticipated market movement.

This has resulted in a high level of craft assets. Doing this may not have been the best approach and has resulted in recent downsizing the Incat workforce and finance constraints. The solutions rest in selling craft." Reassuringly so. Wells adamantly said that it will not. "Our relationship with Bollinger/Incat USA and their customers continues to grow at a very pleasing rate.

The situation in Tasmania has no effect on the Bollinger/lncat USA relationship and does not effect availability and sup- port of Tasmanian built product from the Incat side of the partnership. We will also continue with our plans to lay keels of Incat WPC at Bollinger." When contacted by MR/EN, Incat's CEO, Robert Clifford was equally up front as well as upbeat about the Bollinger Incat alliance, "We (Incat Australia) owed our bank around $70 million, a figure that was reduced considerably when we sold a vessel during the middle of April." Clifford said. "Another deal is on the table, which if completed will retire the bank debt.

"Several other deals are also being considered, which when completed, will mean that the company will be trading profitably.

"Bollinger/Incat and Incat USA will not be affected," he added. 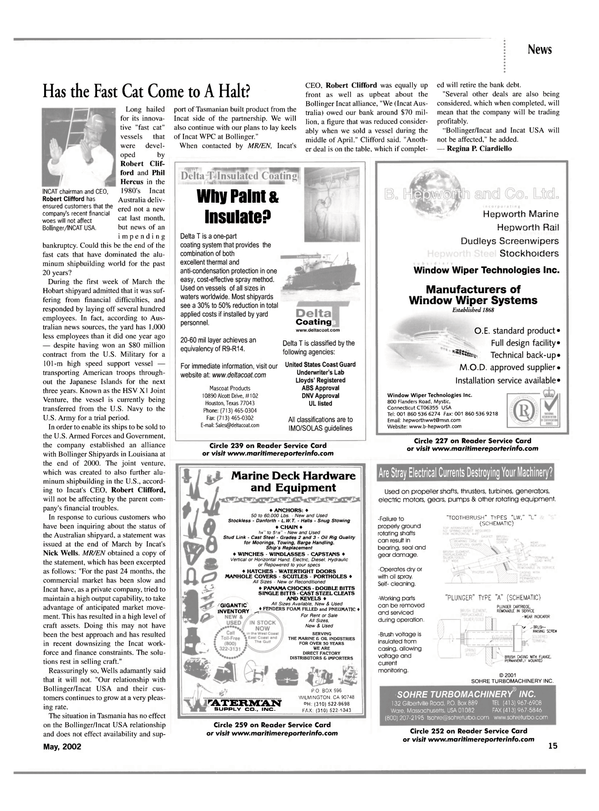 Read Has the Fast Cat Come to A Halt? in Pdf, Flash or Html5 edition of May 2002 Maritime Reporter