IZAR's Seville yard has delivered the largest RoPax ferry ever to sail under Spanish flag to owner Trasmediterranea.

IZAR's delivered on March 14 its yard number 291. the 6.900 dwt RoPax Murillo. As the largest RoPax vessel ever owned by a Spanish company and sailing under Spanish flag, it exceeds the dimensions of any other vessel in Trasmediterranea's fleet, even the recently delivered 564-ft. (172-m) RoPax sisters Sorolla and Fortuny.

Seville has introduced substantial improvements in cargo and accommodation capacities on the Murillo, a project that followed the successful design carried out on the Merchant series of four vessels for Cenargo. Payload cargo has been increased, as the accommodation, for instance, has been more than doubled. Murillo has 123 cabins of dif- ferent sizes compared with the Cenargo vessels' 57 — an increase in the number of passengers up to 396 in cabins and 150 in seats.

Also, Murillo has 2,396 vehicle lane meters (l ,900 lane m for trucks and 400 lane m) for cars on four decks where Cenargo vessels performed 2,000 lane meters on two decks. The lower cardeck is located on the tank top with the upper one mounted directly above it. Access is provided by a fixed ramp between the decks, which in turn can be accessed via a fixed ramp from the main deck. Two lifting ramps provide access to and from the upper deck.

Lips propellers are used on Murillo, which incorporates two Brunvoll bowthrusters. Stabilizing is done via an Intering anti-roll system. This is further enhanced with the addition of Mitsubishi retractable hydraulic fin stabilizers. 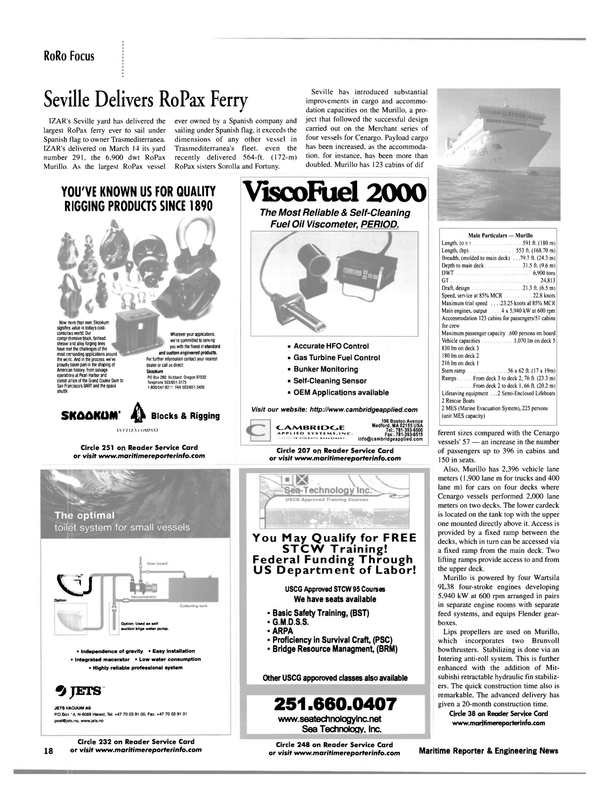