One of the Maritime Administration's (MarAd) missions is to provide shipping capability during a declared national emergency.

As one part of this mission MarAd has identified the need to have "on-the-shelf" plans and specifications f o r designs which will satisfy shipping requirements.

MarAd initiated a "Ship-Designs for Mobilization" program in 1974 to identify these requirements. Ship characteristics were developed through an analysis of potential emergency shipping needs, shipyard production capabilities, and a variety of design constraints and requirements.

This paper presents the present status of the contract design phase and the original preliminary design of the Multi-Purpose Mobilization Ship along with three alternative versions showing possible configurations utilizing optional features. This particular design provides flexibility and versatility to effectively handle and stow containerized, roll-on / rolloff, unitized, breakbulk, or heavylift type cargoes. The design is commercially attractive in trading with developing areas, although it cannot compete with dedicated sophisticated designs in specialized trades.

The second phase has also been completed. It began with the development of three conceptual designs— the PD-204 versatile general cargo mobilization designs.

These cargo ships were planned as candidates for the basic building blocks of the mobilization fleet. These designs were developed through the concept stages to assure feasibility. The three designs offered a variety of ship sizes and cargo-handling arrangements.

Features of the three designs developed were compared with each other for their particular advantages and disadvantages.

The middle sized "550 Combination," on the other hand, was 539-feet in LBP and 97-feet in beam and had a multipurpose cargo-handling approach. Eight holds with 'tween decks were serviced by cranes (or kingposts and booms) with hatch covers forming a container-guide structure, which when in a vertical position, allows easy loading of containers.

A stern ramp was also provided for roll-on/roll-off cargo access to the second deck.

In September 1979 a contract was awarded to M. Rosenblatt & Son, Inc. to prepare the contract design of the base ship and a number of alternative versions utilizing various optional types of propulsion machinery and cargo gear. This work is scheduled to be completed some time after the presentation of this paper.

The preliminary design was the starting point for developing the contract design. The object of the contract design phase is to complete the preparation of plans and specifications to a level of detail adequate for a shipyard to produce a bid quotation to construct the ship.

As a result of the Government/ Industry Mobilization Ship Conference in November 1978, numerous comments were received which indicated that the preliminary design was too small for both commercial and military operations.

Comparison with the results of MarAd R&D study on the design of the next generation cargo liner also indicated that a larger vessel would be more appropriate for commercial use. This R&D study is particularly valid since it was done in cooperation with seven ship operators.

It was concluded that the new contract design base ship length should be the same as the preliminary design jumbo. In addition, the beam was increased to 105 feet 6 inches. It became apparent that, for more efficient container stowage, the hull depth should be increased to 70 feet, and it was decided to use flush, mechanically operated hatch covers on the weather deck and to include a ramp to allow vehicle access to the weather deck. Finally, the hull material was changed from mild steel to highstrength steel when it was found to be readily available in mobilization situations. The design is shown in Figure 1.

General Arrangement The preliminary design of the Multi-Purpose Mobilization Ship is a single-screw ship capable of loading, transporting, and discharging a mix of roll-on/roll-off, general breakbulk, unitized, and containerized cargo. The house and engine room are located aft.

The machinery space is designed to accommodate any of various types of main propulsion machinery plants of the required horsepower necessary to provide a minimum 20-knot speed.

In determining the degree of automation to be used for the m a c h i n e r y , the dichotomy between the desire for simplicity of design and construction (requiring less automation but increased manning) versus the limited availability of trained shipboard engineering personnel (dictating decreased manning and increased automation) during an emergency must be considered.

The "one-man" watch concept selected for all mobilization ship powerplants appears to be a reasonable compromise.

All configurations of the mobilization ship can be lengthened.

The jumbo Multi-Purpose Mobilization Ship version prepared during the preliminary design added one complete cargo hold of 110 feet, with associated cargo-handling gear, to the base ship. Speed remains above 20 knots.

The Multi-Purpose Mobilization Ship design can handle general breakbulk cargo, c o n t a i n e r i z ed cargo and ro/ro cargoes. Some of the commercial cargoes that can be driven on are buses, trucks and cars. Containers can be lifted onboard using shipboard cranes or carried on by straddle carrier or forklift. Palletized cargo, such as oil drums and cartons, can be carried aboard using forklifts or lifted aboard. Paper rolls, cable reels, lumber bales, and random lengths of pipe can all be easily handled.

Military cargo items, such as M60 tanks, can be loaded over the ramp or hoisted onboard, using the twin-tandem heavy-lift capability.

Cargo type helicopters also can be lifted or rolled aboard.

Trucks and other wheeled vehicles can be quickly loaded and discharged over the ramp. The portable cardeck can accommodate jeeps in the ro/ro space.

Overall, the ship has enough capacity to carry supplies and equipment for one Army battalion.

A 114-foot slewing stern ramp is installed to provide access to the ro/ro deck (Second Deck). It is hinged to a turntable, allowing it to rotate so that the vessel can be offloaded when either port or starboard side is adjacent to the berth. It is 24-feet wide, permitting two-way truck traffic. Two sideports are also provided to allow allow additional ro/ro access to the Second Deck.

Portable cardecks are installed in the Second Deck ro/ro area.

These are lowered and form a deck with a 5-foot overhead clearance, so that maximum utilization of space can be realized when carrying automobiles.

Since in wartime mobilization situations manufacturing capacity may not be adequate to supply the necessary numbers of sophisticated cargo gear such as deck cranes and slewing ramps, provision has been made in the design to incorporate alternative gear.

For instance, a quarter ramp or a single straight stern ramp could be utilized. Instead of deck cranes it would be possible to utilize kingposts and booms. Another alternative capability that has been included is the installation of a gantry crane instead of the deck cranes. Depending on the amount of ro/ro capability required, internal ramps to the Tank Top and/or Third Deck and watertight doors between holds could be omitted. Likewise, watertight doors can be added to increase the ro/ro capability into the forward holds.

Machinery Selection M a c h i n e r y considerations for the Multi-Purpose M o b i l i z a t i on Ship preliminary design were generally dictated by the environment in which the vessel was expected to be constructed. Since the ship is intended to be rapidly built during a full-scale wartime mobilization for military support, or to serve as replacement tonnage of U.S. ship losses for postwar commercial trade, simplicity and efficiency are characteristics required of the machinery plant to satisfy this operating profile.

Normally, a propulsion system most compatible with the ship's mission would be selected on the basis of trade-off studies, considering space, weight and arrangement requirements, fuel consumption and costs. However, since the production of the maximum number of ships in the least time is a major planning objective, tradeoff studies to determine the optimum powerplant are less important.

Since production capacity for a particular type of machinery is limited, designing the vessel to a c c o m m o d a t e several different types of powerplants increases the number of ships that can be constructed in a given time frame.

The combined criteria of availability, marine service experience and design simplicity led to consideration of the following machinery alternatives for the preliminary design of the mobilization ship: Steam turbine; medium- speed diesel; slow-speed diesel; h e a v y - d u t y and aircraftderivative gas turbine prime movers, with geared (or direct-drive, in the case of the slow-speed diesel) transmission systems, and fixed-pitch propellers.

Transient Personnel A comment received from the military community suggested that, for mobilization purposes, provision should be made for the carriage of 50 transient personnel in addition to the ship's base crew. Based on recent studies, modular accommodations aft of the deckhouse would meet this requirement.

The facility is intended to be as completely self-contained as feasible. The modules would be the same size as I.S.O. shipping containers.

The accommodation complex consists of 21 modules above the Main Deck for berthing, galley, messroom, lavatory, stores, laundry and recreation; interconnected by stairways and passageways. A sewage module, consisting of a sewage holding tank and pumps, receives drains from sinks, showers, lavatories, etc., and would be located aft the house below the Main Deck. The lavatory and galley modules would be equipped with internal plumbing supplied from the ship's fresh water system. 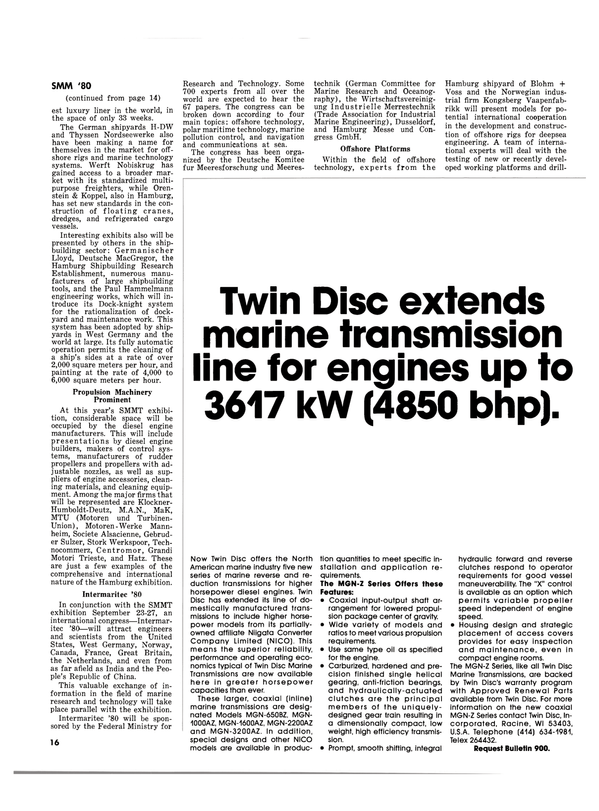