Furuno has announced the availability of two new high-performance sonars for commercial and sport fishermen. Both units offer an exceptionally wide range of standard features, such as automatic target tracking, 1-kw output power, choice of 60 or 150- kHz operating frequency, a compact and rugged hull unit and sound dome with 0 to 90-degree tilt, automatic or manual train, and adjustable sector scan.

The Furuno FH-106, with its high-persistence, 10-inch CRT, offers a much broader range of standard features. Six range steps to 5,200 feet are provided, each of which has a variable "fine tuning" zoom capability within the range selected. A built-in digital display shows tilt angle plus VRM for maximum screen range, slant range to target, or horizontal distance to target.

The key operating feature of the FH-106 is the memory display.

An IC memory stores target echoes after one t r a n s m i s s i on pulse, then repeats them while the sweep smoothly continues rotating.

This feature provides an exceptionally clear "radar-like" picture not available in other step-by-step searchlight sonars.

In addition, visibility in longrange detection is increased dramatically due to the steady, nonfading echoes.

Both sonars may be supplied in 12-, 24-, or 32-volt dc versions (ac operation with optional rectifier) , and are now in stock for immediate delivery. 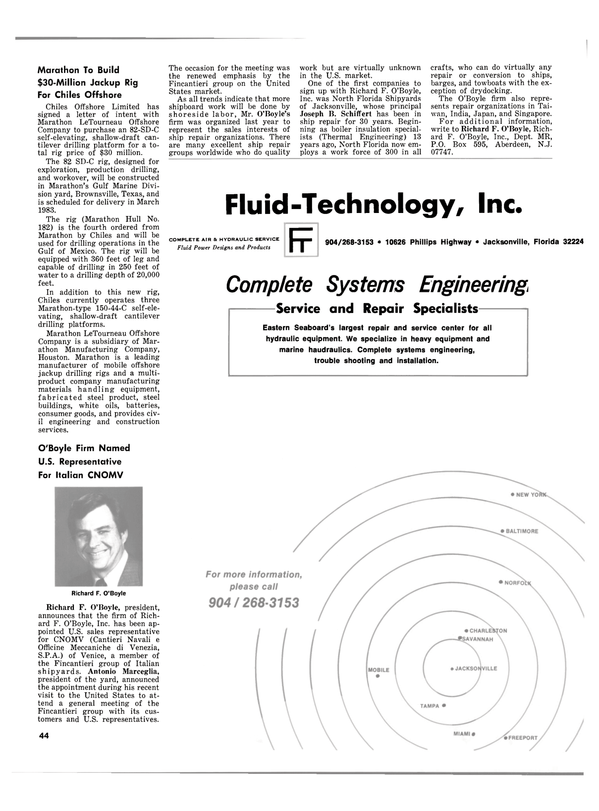