The Marie Tilton has a beam of 72 feet and an amidship side depth of 25 feet 10 inches. The barge can be either towed or pushed by tug. To be operated in the New York City area, the barge will be suitable for carrying grade B, and lower, petroleum products, including heavy fuel oil.

Ten c a r g o t a n k s with two abreast and five in length will have a volumetric capacity of 103,500 barrels. Three main cargo deepwell pumps, with individual capacities of 6,000 barrels per hour, will be on deck. Each pump will be powered by a GM Detroit Diesel V16 engine developing 480 bhp. Three additional diesel engines, rated at 446 bhp each, will give the barge a total off-loading capacity of 18,000 barrels per hour.

A flexible cargo-handling system has been built into the Marie Tilton to facilitate the carrying of multiple cargoes. More than seven miles of heating coil piping has been incorporated into the barge for cold weather operation.

This was the first vessel built by Bay Shipbuilding for Turecamo Coastal & Harbor Towing Corporation. Bay Shipbuilding, a s u b s i d i a r y of The Manitowoc Company, intends to actively engage in securing contracts to build more saltwater vessels. 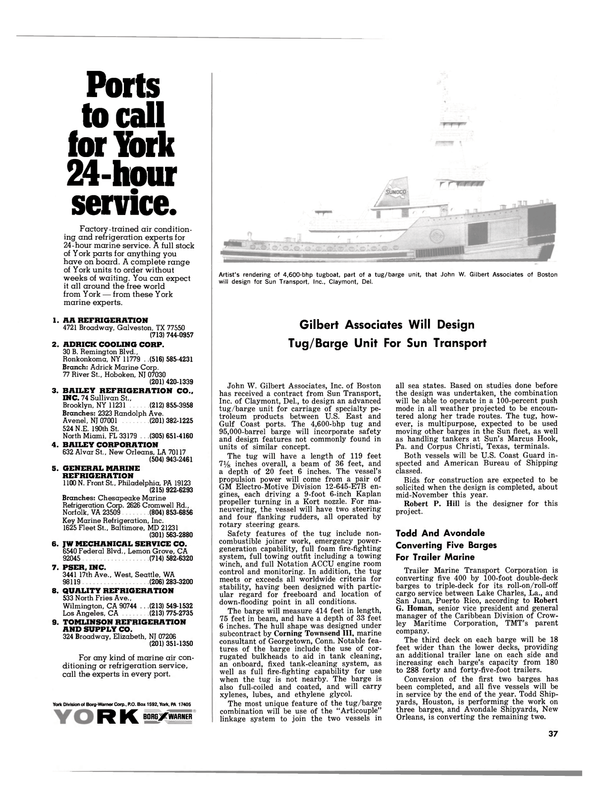