A Toronto company is prepared to start a roll-on roll-off, translake ferry service if the scheme receives approvals from U.S. regulatory bodies.

Sherwood Marine Inc. has been developing plans for a truck/ trailer ferry run across Lake Ontario for some time, and has set up a subsidiary, Ro-Ro Ontario Inc., to operate the proposed service.

According to company president W. Paul Sherwood, his firm is willing to spend $35 million to establish the ferry link between the Port of Toronto and a yet-to-be-determined US. city.

Several sites for the U.S. base port are being considered and include Somerset, Rochester and Oswego, all located in New York State.

"A new marine service across Lake Ontario carrying commercial tractor trailers will mean significant benefits to the transportation industry and the consumer," said Mr. Sherwood, who explained that he is confident his firm will gain the necessary approvals to operate the service.

"There is no indication, from the preliminary studies, of any problems," he said.

"The service offers a fast and inexpensive alternative to shippers of freight and parcels between Canada, the United States and foreign destinations. It's a cost-efficient transportation method that is expected to have a discernable impact on lowering fuel consumption, as well as reducing truck traffic on public highways," he said.

According to Mr. Sherwood, feasibility studies conducted in both Canada and the United States have shown that the 2y>- hour translake service is a practical practical approach to shipping commercial traffic as compared to the conventional overland method.

Once given the go-ahead, Mr.

Sherwood expects to inaugurate the service with a chartered RO RO vessel. This would be followed by the construction of equipment specifically designed for the run and for this purpose.

"Further down the road we will have to build," he said. Among other craft, Sherwood Marine is looking at a U.S.-designed Catug integrated tug-barge system. Marketed in Canada by Bulk-Mar Canada Inc., a Toronto-based affiliate of Logistec Corporation, the Catug cross-lake ferry would accommodate 85 trailers on two enclosed decks of the barge, with room for up to 51 twenty-foot containers on the exposed upper deck.

Designed by J.B. Hargrave, Naval Architects Inc. of West Palm Beach, Fla., in collaboration with Seabulk Corporation of Fort Lauderdale, the unique Catug system incorporates a twin-screw catamaran tug that fits closely over and around the specially contoured stern of the barge. 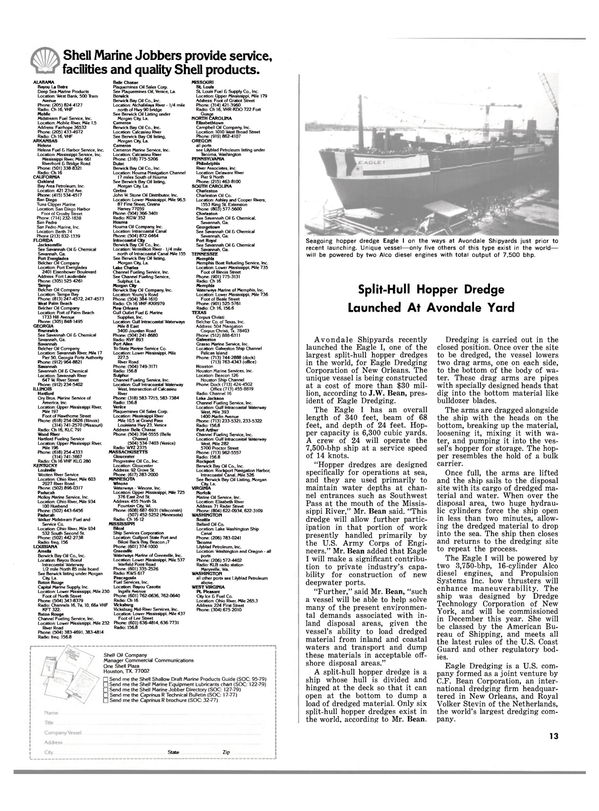