The yard, the company's third, will be located at Demopolis, Ala., on the Tennessee-Tombigbee Waterway.

George Schiro, vice president, said the company decided to di- versify from their traditional deck and tank barges because of the strong demand recently for hopper barges to move coal.

Bergeron, with yards in St.

Bernard, La., near New Orleans, and Port Bienville, Miss., is reportedly the largest builder of deck barges for the offshore oil industry. The firm constructed 58 deck barges in 1980.

The new firm will be called Bergeron Barges Inc., a subsidiary of Bergeron Industries. Con- struction on the yard is scheduled to begin soon. Production is set to start in March 1982 of large hopper barges with a cargo capacity of about 3,000 tons, or approximately twice the capacity of normal river hopper barges.

Florida Barge Lines Corp. of New Orleans, a subsidiary of Central Gulf Lines, filed an application last week with the Maritime Administration for vessel construction loan and mortgage insurance for nearly $93 million worth of tugs and barges. The carrier intends to build 116 hopper barges and 12 tugs, with Bergeron scheduled to construct the barges for delivery in 1982 and 1983, its first contract.

Studies show the demand for river hopper barges in the U.S.

is already greater than the current capacity of the shipbuilding industry, noted Mr. Shearer. He added that the barges to be built by Bergeron could be used to carry grain, if covers are added.

Mr. Schiro said several factors entered into the decision to choose Demopolis for the new shipyard.

Demopolis is located on the Tennessee- Tombigbee Waterway, which is scheduled for completion in late 1986. The waterway will generate a demand for more hopper barges to move coal, and will also create a need for barge repair and maintenance facilities.

Mr. Schiro said the new yard will eventually engage in repair work too.

He noted that the Tenn-Tom will provide cost-efficient water transportation to carry raw materials to the new yard. Finally, he said, the Demopolis area has a readily available labor force with a record of high productivity. 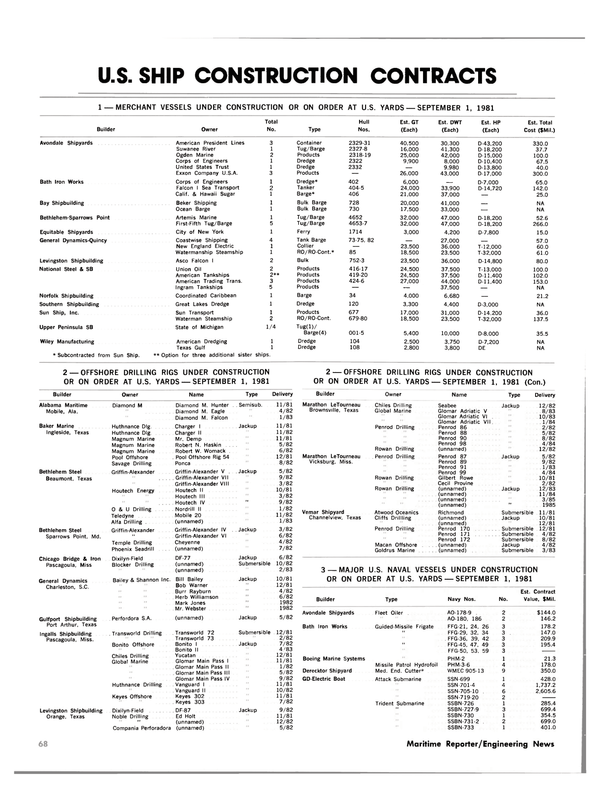