The City of Valdez, Alaska, recently awarded a contract for the construction of a container terminal facility that includes what is believed to be the world's first floating container dock, according to Mark Lewis, city manager.

The contract was awarded recently to a joint venture of Morrison-Knudsen Co., Boise, Idaho, and Manson Construction and Engineering Co., Seattle, Wash. Full service is anticipated by fall of 1982.

The facility will include an offshore 21-acre marshaling yard that will connect to shore by a 1,500-foot-long pile-supported trestle. The marshaling yard-todock connection calls for two 200- foot orthotropic steel box girder bridges capable of handling two lanes of truck traffic as container ships and barges are unloaded.

The floating container dock, to be anchored by eight 600,000- pound concrete blocks, will require that the bridges be designed for a 22-foot tidal variation.

The prestressed concrete dock, measuring 700 feet long by 100 feet wide by 30 feet deep, will be fabricated in two sections by Concrete Technology at its Blair Waterway plant in Tacoma Wash. It will employ a combination of precast and cast-in-place construction. The multi-celled sections will be post-tensioned throughout.

Fabrication of the floating units will begin this fall with completion set for spring 1982. The two units will be towed from Tacoma to Valdez where the general contractor, MK-Manson, will posttension the separate units into a single continuous dock.

The steel bridges linking the marshaling yard and dock are to be fabricated by Conron Corporation at its Star Iron and Steel Division in Tacoma. The bridges also will be towed to Valdez for integration into the floating dock facility. 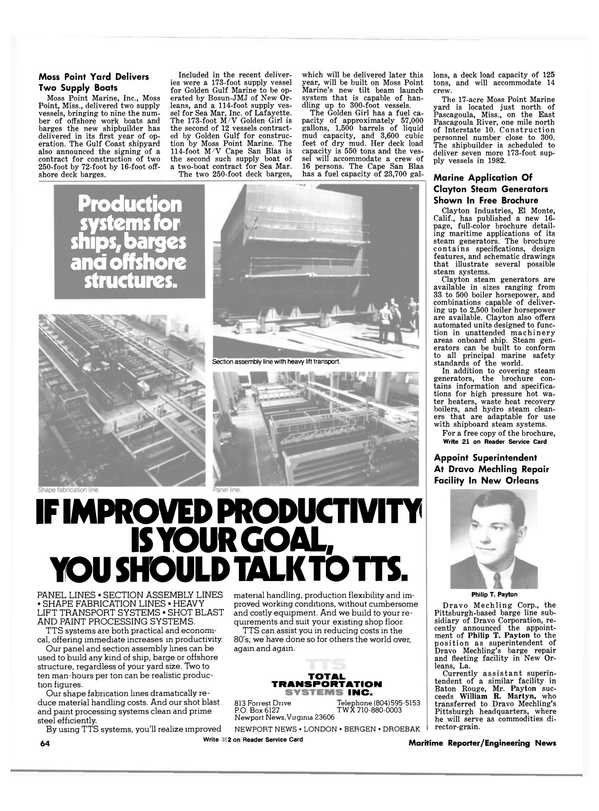