The "Holland" (shown above) will offer a new service to the East Coast fishing industry, providing American fishermen with the opportunity to sell their catch at sea, and offering export markets the best-preserved fish products from this country.

The 151-foot-long Holland—the original version of this now fully refitted ship — was built in the Netherlands in 1964 as a wetfish stern trawler, and fished herring actively through the end of 1979, when she was removed from service after the collapse of the North Sea herring fishery. The boat was acquired under the subsequently enacted Dutch government policy of subsidizing the sale of such vessels outside the Common Market.

The Holland was converted at Oranjewerf Shipyard, Amsterdam, into a freezer ship/mother ship. The renovation included installation of a freezing capacity of 20 tons per day in two airblast freezers on the main deck, plus a supplementary freezer in the hold; the insulation of the fish holds to permit storing about 150 tons of frozen product below 0°F; installation of refrigerated seawater tanks on the aft deck to keep additional fish chilled prior to placement in the blast freezers ; the conversion of the electrical generating equipment to supply power to the refrigeration equipment, and the installation of new net-handling equipment.

The Holland will take delivery at sea of fresh-caught fish—usually squid and butterfish—from typical American fishing vessels by a procedure known as "cod end transfer." During the transfer procedure, the collecting end of the harvest ship's fishing net will be disconnected from the remainder of the net and reattached to a line from the Holland.

The Holland will haul the fish onboard and begin the freezing operation.

The frozen squid (calamari) will be marketed in southern Europe and the butterfish in Japan.

These catches should keep the Holland busy for five to six months each year. Then the vessel's capabilities will be employed in other fisheries such as sea trout, bluefish or croaker, or as a supplemental dockside freezer plant at any of the East Coast ports that do not presently have land freezers.

Despite being one of the richest and most abundant shorelines in the world—20 percent of the world's fish resources lie within the 200-mile limit — America's East Coast has yet to develop into a major exporter of fish products.

Among the reasons for this failure has been the long-standing inability of American industry to compete successfully with the large and efficient foreign factory ships which for years operated in U.S. waters.

The foreign advantage was tempered in 1976 with the passage of the Magnuson Fishery Conservation and Management Act that restricted foreign vessels.

Under its terms, American industry is given first call on the fishing harvest, with the remainder— the so-called Total Allowable Level of Foreign Fishing, or TALFF — allocated by the State Department only after U.S. 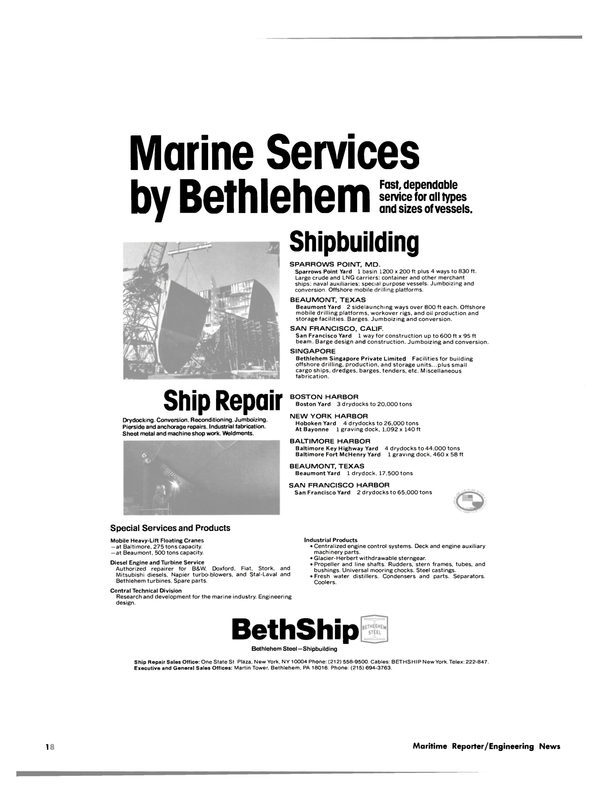