The year 2000 has enjoyed special significance as a transition year bridging two centuries. Similarly it has significance with U.S. lawmakers for the Second Session of the 106th Congress. As the last year of the currently elected Congress, this year anticipates action on a series of pending legislative measures and yet to be introduced proposals affecting the maritime industry. Specifically tax-related legislation and maritime policy-related legislation could be addressed.

The following is a sampling of possible changes in the law: I. Maritime-related Tax Legislation: There are several tax-related provisions that could be considered. One of the main bills emphasizing maritime tax issues has been introduced in the House by Rep. Jim McCrery (R-LA) as H.R.

Qualified withdrawals from a CCF would continue to apply only to U.S.- built vessels and would be expanded to include vessels that operate between coastwise points of the United States.

Contributions to a CCF would no longer be treated as preference items under the alternative minimum tax for corporations.

Finally, owners of U.S.-flag vessels would be allowed to contribute to a CCF the 50 percent ad valorem duty on foreign ship repairs that applies to present ships under 19 U.S.C. 1466.

B. Other tax-related provisions in the Breaux/McCrery bills: Merchant mariners working aboard certain vessels would be covered by section 911 of the Internal Revenue Code, thus excluding up to $80,000 of the wages they earn while working in foreign commerce.

The acquisition cost of a U.S.-flag ship would be deductible as an expense rather than being treated as a capital investment.

The alternative minimum tax for corporations would not apply to shipping companies owning a fleet of four or more U.S.-flag vessels.

Equally as significant. Congressman Duncan Hunter (R-Calif.) has introduced H.R. 3392, which provides various incentives for the development of a U.S.-flag, U.S.-built cruise industry, including CCF coverage and expansion of the business entertainment tax deduction.

The chances of enacting favorable tax provisions for the maritime industry are enhanced by the existence of other mar- itime tax bills to exempt seamen's wages when in the foreign trade (H.R. 3162), to restore the exclusion of shipping income from Subpart F (in particular, section 954 of the Internal Revenue Code) and reduce the adverse impact of U.S. international tax policies on the competitiveness of the U.S. shipping industry (H.R.

265), and to revitalize the international competitiveness of the United States-flag merchant marine (H.R.

II. Other Maritime-related Legislation and Proposals.

Other legislation may address government programs and policies that affect the maritime industry.

These initiatives may include: A. Domestic Shipbuilding Loan Guarantees - Title XI Funding. With the commitment to provide loan guarantees for the construction of cruise ships and for projects requiring lesser amounts of guarantees, the amount of funding available to cover the cost of the Government's risk for further guarantees under Title XI of the Merchant Marine Act, 1936, is less than $50 million. There is an effort in the industry to add an additional $50 million to the Title XI account, which will permit around $1 billion in guarantees since, on average, the risk cost is about 5 percent of the loan amount. The recently enacted appropriation for fiscal year 2000 provided only the President's budget request of $6 million to cover Title XI loan guarantee costs. The President's budget request of only $2 million for Title XI in FY200I provides an additional obstacle. If a number of the projects are submitted to MarAd, a funding shortfall will occur unless legislative relief is provided.

B. Cargo Preference. The Administration's proposed MarAd authorization bill may once again include an amendment to alter the requirements of section 901(b) of the Merchant Marine Act, 1936, to permit foreignbuilt dry bulk vessels and breakbulk vessels to be placed under U.S.-flag and used for carrying agricultural preference cargo. Because this provision was rejected last year as having an adverse impact on existing operators and domestic shipbuilding, it is unlikely to be successful this year.

C. Scrapping. Currently, scrapping of ships in the U.S. does not occur because of prohibitions on exporting hazardous materials contained in them and the environmental risks associated with disposing of those materials.

In addition, the domestic price paid for scrap has fallen dramatically making it uneconomical. MarAd and the Navy have aging mothballed fleets that need to be addressed. In fact, the Navy now has in progress a pilot program of paying domestic firms to dispose of old ships. As MarAd Administrator, Clyde Hart has called for innovative ideas, and Congressional action to facilitate disposal of both government and privately owned vessels.

D. Coast Guard. Bills introduced in both the House and Senate to authorize appropriations for the Coast Guard for FY 2000 and 2001 have been considered, but not yet enacted. The Coast Guard bill traditionally becomes a vehicle for various maritime amendments, often late in a congressional session.

E. Bills Affecting Marine Cabotage. Among all of the policy-related legislation, none evokes more of a response than pending legislation designed to alter the domestic coastwise trading laws of the United States.

However, the U.S. Maritime Cabotage Task Force and others in the industry have expressed strong opposition to these bills because of their implications for undermining U.S.-flag requirements generally and enactment appears unlikely. Examples of these include: Sen. Brownback's (R-K.an.) bill (S. 1032) to amend the Jones Act to permit foreign-flag vessels to carry forest products and other agricultural commodities in the U.S. coastwise trade.

Several bills to override the requirement under the Passenger Vessel Services Act of 1986 (PVSA) that only U.S.-built, U.S.-flag ships may transport passengers in the coastwise trade.

In March 1998 the Supreme Court declared that the existing harbor maintenance tax (HMT) on the value of exports was unconstitutional. In May 1999 the Administration sent legislation to the Congress that would terminate the remaining HMT on imports and domestic cargo and replace it with a new Harbor Services Fee (HSF) to be imposed on four different categories of commercial ships in excess of 3,000 gross tons, including tankers and bulk vessels. The proposed fee is expected to raise about $980 million annually, to be used for maintenance dredging and harbor deepening projects. Because of broad maritime industry opposition, the proposal has little support among Members of Congress, many of whom prefer that dredging be funded from general appropriations as was the practice prior to the establishment of the HMT in 1986.

What will result from the consideration of these bills during the Second Session of the 106th Congress this years remains to be seen. Given the pending and possible legislative proposals and the impending national elections, however, the year 2000 promises to be one of intrigue and challenge for the maritime industry in the United States. 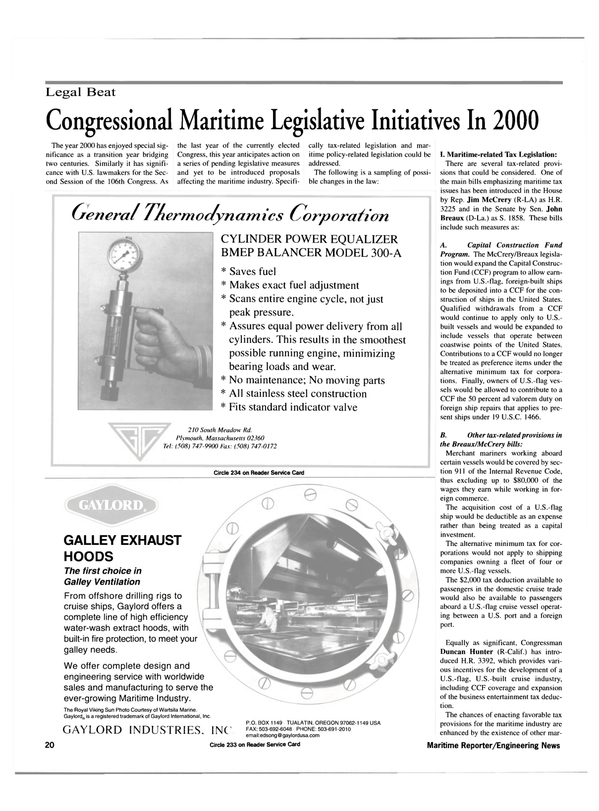 Read Congressional Maritime Legislative Initiatives In 2000 in Pdf, Flash or Html5 edition of May 2000 Maritime Reporter