FR. Fassmer & Co.: Keeping It In The Family

Fassmer-Shipyard this year celebrates its 150th year in business, and the companies' chronology is literally a case study in the effective use of and evolution of marine materials.

Founded as a one-man boatyard by Johann Fafimer in Bardenfelth in 1850for the purpose of boat building, the company has evolved from a one-man shop producing wooden boats for hydraulic engineering and fishery to a dynamic medium-sized company, which today builds everything from a 177 ft. (54 m) fishing surveillance craft to a wide range of lifeboats, tenderboat and fast rescue boats for the cruise and ferry markets.

From the trees to the water Fassmer-Shipyard was literally built of wood, wooden boats that is, and the company served the aforementioned commercial market for its first 30 years admirably. When Carl Johann Friedrich Falimer - known as Friedrich - joined his father's business in 1880. Under his management, the company was enlarged for the first time, and its product range was extended to include sporting boats. By this time, word of the company's good quality had spread, and the backlog had increased accordingly. During the 1890s, the company added a second boatbuilding shed, acquired new mechanical equipment and increased the number of employees to 20.

The next period of growth came around 1920, when Johannes Arnold Ludwig FaBmer - known as Hans - took over management as the third generation. The company was able to weather the severe economic storm of the times through diligence and the delivery of high quality product, but also through expansion of product, as it now offered its dinghies and popular motorboats. Large orders for naval cutters and dinghies, which started to be constructed from steel, made it necessary to erect another production hall in 1940.

Alloys, GRP and Aluminum: Banking on the future Planned shipbuilding after World War II did not start again until after the currency reform of June 20, 1948.

Whereas until only wood and steel had been used for building boats, 1948 brought the first order for a boat made from light alloy.

In the mid-50s Friedrich (Friedel), and Heinz FaBmer, the company owner's two sons, went into business with their father. At that time, the production of lifeboats accounted for an ever-increasing share of production. Initially built from wood in the traditional way, steel and aluminum were increasingly being utilized.

In 1958 Fassmer was one of the first shipyards in Europe to start using plastics, an advancement at the time, which literally set the company's future course through today.

Only a year later, the first lifeboat made from glass fiber reinforced plastic was delivered to DDG Hansa Shipping Co.

Just before the 1960s, the company outgrew its original site and the decision was made to relocate the works outside of the dike at Motzen, where in 1961 the first boat was launched on the yard's own slipway. In the early 1960s, the company was a diverse entity producing boats for many commercial and consumer markets in nearly every material available. A range of different working and authority boats, as well as sporting boats and lifeboats - built from steel, light alloy and glass fiber reinforced plastic - now dominated production at the Fassmer-Shipyard.

It had been recognized by the company early on that wood was going to be replaced by modern materials, a realization that helped Fassmer prosper while other similarsized competitors failed.

In 1964 Hans FaBmer transferred management of the company to his two sons, Friedel and Heinz, at which time the company employed about 40 people.

With new management in place, the company made many decisions and deals, which laid the foundations for its current status. In 1968 Oldenbusch & Co. - a company mainly involved in ships equipment and light metal construction - was acquired. In the 1970s, the company gained Volkswagen AG as a customer for elevated roofs made from GRP, a contract that was won largely because of the company's gained experience in the area of its lifeboat work. It was during this period that the breadth of Fassmer's offering was firmly established - special shipbuilding; lifeboats; production of non-industry components made of fiber composites; and ship equipment - a factor which would keep the company strong during good times and bad.

In hindsight, development of lifeboats and tender boats for cruise ships was an important step in the company's history, in step with quickly changing regulations regarding safety according to SOLAS and IMO. However, at least as important from the company's view, was the development of completely enclosed lifeboats of the GMR type (enclosed motor lifeboats) or, respectively, TGMR type, which were used as tanker lifeboats. A test in which an enclosed lifeboat with sprinkler system was left in a sea of flames for 10 minutes in 1983 demonstrated the resistance of the new boats. Similarly, the development of free-fall lifeboats in the early 1980s was another important step, and in 1985 the first free-fall lifeboat of the GAR type 6.0 was delivered to Sietas Shipyard for the ship Uwe Kahrs.

The mid-1980s marked another generation of management with the company, as Hans FaBmer, the son of Friedel FaBmer, joined the company and immediately became involved in the construction of a 100 ft. (30.5 m) police boat for the Bremen River Police. The contract was significant, as it led to a large number of orders for similar boats made from the sea-water resistant aluminum. Holger FaBmer, the son of Heinz FaBmer, joined the company in 1990 and concentrated on the area of composite components.

Two years later, Harald, another one of Heinz's sons, came onboard, and now holds the spot of the last of today's managing directors. He has since been responsible for the shipbuilding and construction division.

The company, one never to rest on its laurels, is preparing to prosper for the next 150 years today. The reunification of Germany allowed the company to make a cooperative agreement with Barth Shipyard, extending its productions and service to the Baltic Coast. In 1996 Fassmer Schiffsservice GmbH Rechlin in Mecklenburg was founded and is a 100 percent subsidiary. Today enclosed lifeboats mainly are equipped here, and small boats up to 49 ft. (15 m) are offered to public authorities. Shipbuilding capacities were significantly increased in 1997, with the raising of the shipbuilding hall and through the long-term partnership with Yantar Shipyards in Kaliningrad. 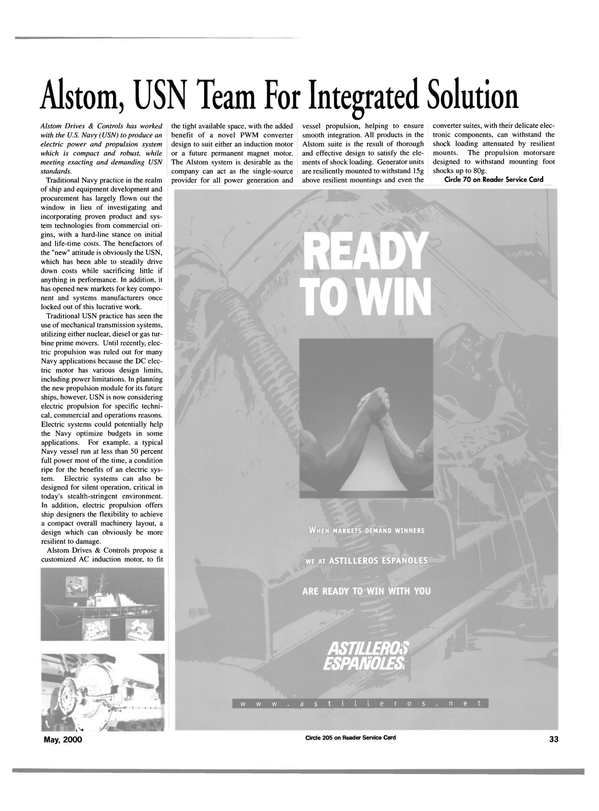 Read FR. Fassmer & Co.: Keeping It In The Family in Pdf, Flash or Html5 edition of May 2000 Maritime Reporter