Friede Goldman Halter (FGH) has finalized six new contracts valued at approximately $40 million total. The contracts have been signed with the following customers: The Venezuelan government has called upon FGH to construct a pair of 153 ft. (46.6 m) LCU-type logistics support vessels. Financing has been secured and construction of the vessel's is expected to commence during the sec- ond quarter at the company's Moss Point Marine shipyard in Escatawpa, MS for a fourth quarter 2001 delivery.

FGH will design and construct a deepwater mooring system for Atwood Oceanics for installation onboard Atwood Eagle — a semisubmersible drilling rig able to operate in up to 5,000 ft., and for the fabrication and installation of equipment for Atwood Richmond.

The 8-point combination traction- winch/windlass mooring system will be designed by the FGH Engineered Products Group's AmClyde division and manufactured by its BLM Offshore facility. Delivery is scheduled for January 2001.

Construction for winterization of Sedco 714 semisubmersible drilling unit for Transocean Sedco Forex will be performed at Friede Goldman Newfoundland's Cow Head Offshore fabrication facility in Newfoundland. Most of the work should be completed by the end of the second quarter. 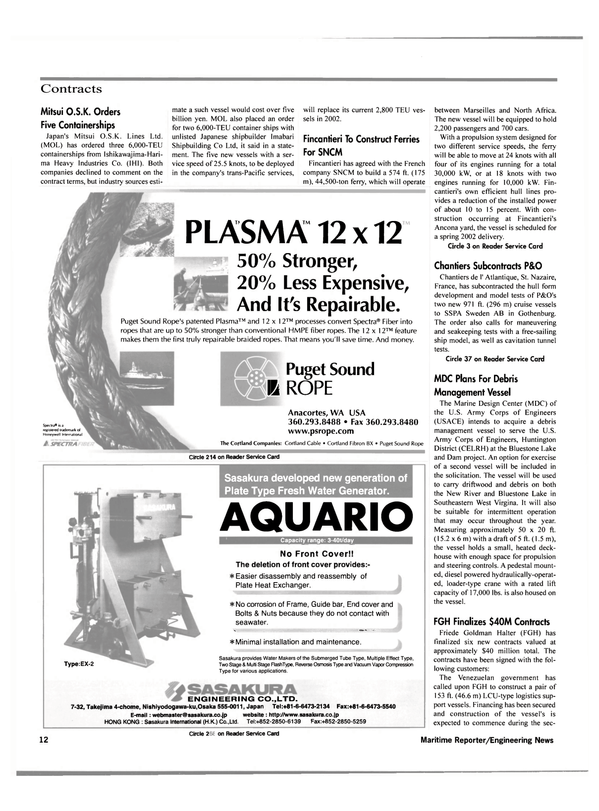