Shipping and offshore shares performed well in March with an increase in the Shipping Index of 2.3 percent.

The Oslo market as a whole fell 2.2 percent, much due to the world-wide price fall for the IT and telecom sector.

Despite the uncertainty about the outcome of the OPEC meeting on March 27 and 28, a number of offshore shares rose significantly during the month.

Even though the oil price fell slightly as a result of the meeting, it is obviously within a price range that is considered as comfortable by investors.

The two share classes in Smedvig (SME and SMEB) were both up about 19 percent in the period, topping the long list of positive performers in the offshore sector. All but five of the listed offshore shares increased their value during March. Polar Holding (POL) and Det Sondenfjeldske (SFJ) ended at the first two spots on the losers list, as they dropped 7.5 and 6.7 percent respectively.

Shipping shares also experienced a dominance on the winners' side, even though not as strong as in the offshore sector. One of the most heavily traded shipping shares, Frontline (FRO), ended the month up all of 28.6 percent, while Bergesen (BEA and BEB) rose 9.3 and 6.9 percent respectively in its two share classes. 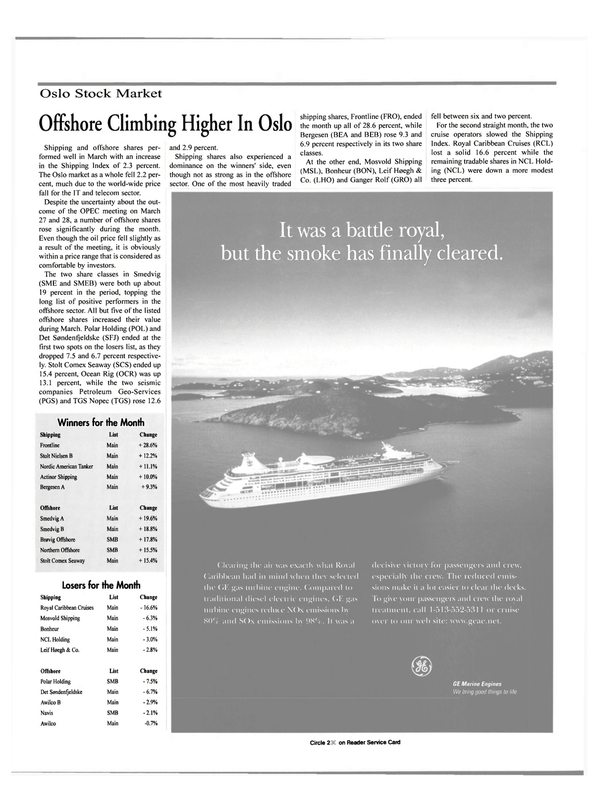 Read Offshore Climbing Higher In Oslo in Pdf, Flash or Html5 edition of May 2000 Maritime Reporter