With the continuing consolidation in the marine engine building sector, and unwavering pressure on engine prices, the stakes are rising all the time as regards design development. But the considerable resource allocation represented in designing a new engine and bringing it to market have, of course, to be countenanced to ensure competitiveness and respond to new and evolving business opportunities and clients' expectations. At a time when it is set to be taken over by Germany's MAN Group. UK producer Alstom Diesels has unveiled a long-mooted addition to its medium-speed range in the shape of the RK280 series. Conceived initially for unit powers up to about 12,000-bhp (9,000-kW), the 280 mm-bore design promises to be a worthy consort to the popular RK270, which has found particular application in its biggest configurations as a propulsion prime mover in large, high-speed ferries. Tailored to the essential requirement for compact, concentrated power in heavier-payload fast ferries and also military vessels, the RK280 also represents a new initiative in the potential territory of the gas turbine.

Following on from last year's move by Wartsila NSD to strengthen its mid-range two-stroke offering with the Sulzer RTA60C, Japanese low-speed diesel engine designer Mitsubishi has announced an addition to its UE family.

With the UEC68LSE, the Japanese firm has put a finer edge on competition in a segment of the business with an established contender at 680 mm-bore, the Sulzer RTA68T, and with the MAN B&W S70MC as a widely-favored choice at 700 mm-bore. Since the latest UE type covers the power band at about 20,000-32,000-bhp (14,700-23,500 kW) on a crankshaft speed of 95 rev/min, it provides owners and yards with a new powering option for a host of bulker, tanker and other types. The UEC68LSE applies the LSE concept first employed in the UEC52LSE engine, which provided a 15-percent power gain on the same fuel consumption as the 50LSII type in the indigenous range. 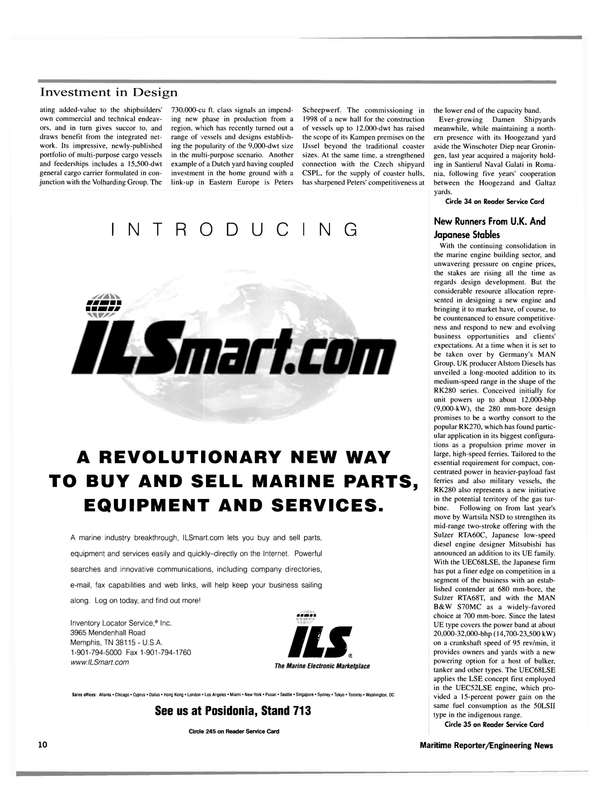 Read New Runners From U.K. And Japanese Stables in Pdf, Flash or Html5 edition of May 2000 Maritime Reporter