Australia is a Tough Testing Ground for Marine equipment

When heavy ships are maneuvered in rough waters with a small crew, or oil tankers are escorted through narrow confined channels, the strength and reliability of a tug boat's towiine is paramount to safety and efficiency.

Tugboats require ship-assist ropes that are extraordinarily strong, yet light enough for a crew of only a few to handle. Tugboat operators around the world have found a solution: Plasma ropes manufactured from Honeywell's Spectra fiber. Made by the Puget Sound Rope Corp. with a unique, patented 12 x 12 braided construction, these are some of the world's strongest synthetic ropes for their weight and are so light, they float.

Also, by using these lightweight ropes, companies have the potential to increase safety for workers and effectively lower workers' compensation costs. For example, the lighter ropes are cited as a factor in contributing to a significant drop in back injuries on deck, the number one insurance claim on boats. A ninein.- diameter Plasma rope weighs slightly more than two lbs. / ft. (3 kg/m). whereas a comparable-size polyester rope is more than double the weight with only one-third of the strength.

"The workers found it hard to believe a rope that small could have that amount of strength." said Geoff Grosskreutz, technical manager of Queensland Tug and Salvage, an Adstream Marine company. "Now, they accept it and are happy with it." This case study considers the experiences of two Australian companies. Adstream Marine, the country's largest tugboat operator.

Changing Tides The introduction of tractor tugs in the early 1980s changed the way tugs assisted ships in their berths. The tractor tug represented a major advancement in tugboat design with its state-of-the-art propulsion system and controllable pitch blades. "The entire scheme of ship assist and high-speed tanker escort changed radically," said Altus of Foss, whose company pioneered tractor tug technology in North America. "It was revolutionary." Unlike conventional tugs, a tractor tug can apply power and thrust - the payload - in all directions. Because of their maneuverability, tractor tugs have been touted as a safer escort for ships, particularly oil tankers.

With tractor tugs, a single line replaced the three to four lines that were previously deployed to the ship. A towiine was needed that had extraordinary strength and excellent impact resistance because of the tractor tug's swift maneuverability. In Australia, one of the biggest factors that drove tugboat operators to seek a better solution to multiple lines was a reform to reduce the crew size from four to three - a master, engineer and deckhand. The country's occupational health and safety laws mandated increased safety on tugboats because of the high incidents of back injuries by deckhands.

Tugboat operators in Australia sought a way to increase productivity with a smaller crew, while at the same time improving safety.

Plasma ropes made with Spectra fiber have proven to be a viable solution, offering one of the highest strengths, lightest weights, lowest stretch and meets the low creep required. Their soft, torque-free braided construction also makes it easy for the crew to handle. The introduction of Plasma ropes and the 12 x 12 construction has been the "biggest single change to the industry" in the past two decades, according to Simon Taylor, Jeyco's managing director. "Plasma rope came along at the right time. It is an enhanced form of Spectra fiber with higher strength." The costs per tow using Plasma rope are about half — or $7 per tow — according to average figures compiled from Jeyco's customers. The prices range based on the job being done. By switching from polyester ropes to Plasma ropes made with Spectra fiber, harbor towage contractor Queensland has cut its costs in half to under $12 per tow. It is using the same mainline for as many as 1,200 jobs and Plasma rope towing tails for up to 600 jobs. Another cost-saving benefit is the ease of repairing this rope. In fact, Puget Sound's 1 2 x 12 braided rope is the first truly repairable braided rope, according to its manufacturer, and can easily be repaired by replacing a damaged strand, keeping it in use longer. The rope is also easy to inspect by the users to determine when retirement is necessary.

Based on its successes, Queensland now uses the ropes on all 23 tugs in its fleet and has been truly satisfied with the results, said Geoff Grosskreutz, technical manager.

Like many other operators, Queensland uses Plasma ropes in a grommet configuration — a long circular loop of line with a Plasma rope tail, connected to the main double-braided polyester line that goes through the boat's fairlead.

This configuration helps to prevent chafing of the rope and the Plasma rope handling tails provide easier hookup and handling.

"Queensland is getting as many as 1,500 jobs out of a grommet and up to 5,000 jobs out of the main line configuration - compared to previously only getting 500 jobs using the whole line," Grosskreutz said. "It's an excellent product and has a good service life," he added. "We're extending the product life while increasing safety and reliability.

Puget Sound's rope is indeed cost-effective." Jeyco Pacific, a marine rigging supplier, helps customers add value to their businesses and reduce costs. Offering Plasma ropes as a towing solution has enabled it to fulfill that mission. After using polyester and other high-strength hybrid materials, the company discovered Puget Sound's Plasma ropes in 1996. It initially took some trial-anderror to get the right sizing for its grommet configuration. But Jeyco now reports 100 percent success with all its customers and has helped make Plasma ropes an integral part of almost every fleet in Australia. Plasma ropes have helped improve labor relations in the country between the unionized workers and management, Taylor said. "Tug operators and crews love this product because it's easier to handle and they can do their jobs quicker and safer," he said.

Strength from the Start The Puget Sound Rope Corp., part of the Cortland Companies, specializes in manufacturing high-performance braided rope for the most demanding applica- tions, from emergency towlines to vessel assists. Puget Sound began a research program in the early 1990s to determine how to best manufacture ropes using Spectraftber. As a result of this research, it developed a new generation of machinery specifically designed to utilize the full potential of Spectra fiber.

Spectra fiber provided Puget Sound with the high-strength-to-low-weight ratio needed to produce ropes that match wire on a strength-per-size basis. "The properties of^Spectra fiber allowed us to do what we do with our Plasma rope process," said Sam Bull, vice president of the Cortland Companies. "Essentially we take Spectra 900 fiber, process it through our Plasma line and depending on the final rope size and construction we see strength increases of up to 80 percent compared to a similar rope." Circle 70 on Reader Service Card www.maritimereporterinfo.com 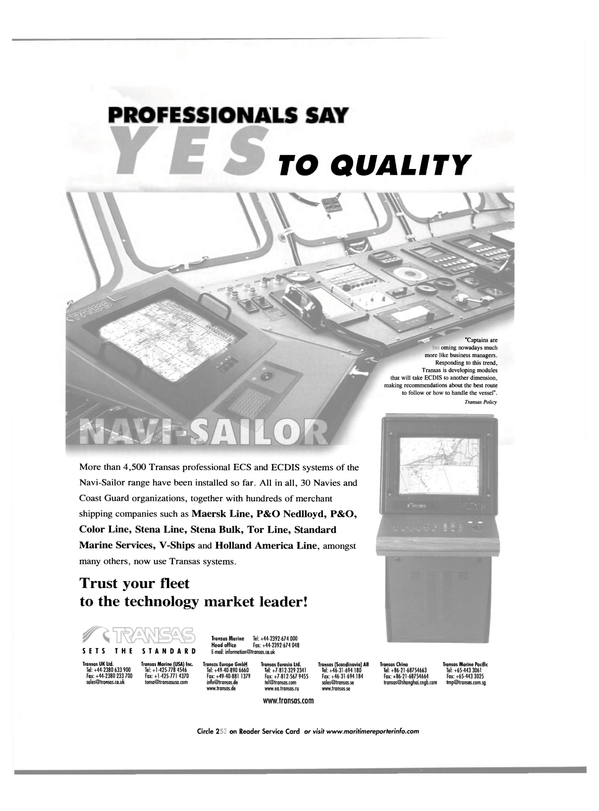 Read Australia is a Tough Testing Ground for Marine equipment in Pdf, Flash or Html5 edition of January 2002 Maritime Reporter