The American Shipbuilding Association has long bemoaned the level of U.S. Navy funding, arguing that the amount of spending on new ships would, in the future, leave the force woefully under-equipped to handle its duties of defense.

Though the ASA is but the lobbying voice of the country's "Big Six" shipbuilders — by consolidation now reduced to, in effect, the Big Two — would be the primary beneficiaries of a spending splurge, it now seems the arguments presented were visionary, as the U.S. enters a gray area in international relations with the recent terrorist attacks in New York and Washington and the resultant war in Afghanistan.

The ASA fight for dollars was taken up in an August 2001 report from the General Accounting Office, a report entitled "Military Transformation: Navy Efforts Should be More Integrated and Focused." (GAO-Ol-853). On the topic of Fiscal and Force Structure, the report reads: "The Navy has not been building enough ships to maintain the roughly 300 ship force mandated by the 1997 Quadrennial Defense Review. The high costs of supporting the current force, the time needed to acquire new ships, and the prospect of a continued mismatch between fiscal resources and force structure requirements increase the urgency of planning for and carrying out transformation ...

the Congressional Budget Office has estimated that the Navy would require roughly $17 billion more each year for fiscal years 2001 through 2005 than it is currently expected to receive to sustain this force level. If current construction rates and funding levels remain the same, the Navy's force could decrease to approximately 260 ships or lower after 2020." By t h e Numbers In 1987, the U.S. had a naval fleet of 594 ships.

While a fleet of that stature is likely unnecessary and uneconomical based on the current world political situation that is devoid of a second legitimate superpower, the fleet today is vastly different from that of less than 15 years ago. Current estimates show the U.S. Navy fleet hovering around the 300-ship level, but most troubling is the procurement level. Simply put, the U.S. has not been ordering enough ships on an annual basis to sustain a 300-ship fleet, the adopted psychological barrier to providing the nation with adequate defense resources. In fact, as ASA reports, annual numbers of naval ships procured is at the lowest level since 1932; the size of the Navy's fleet is the smallest since the year before we entered WWI; and while the fleet has been cut almost in half, the number of overseas deployments has increased 300 percent.

But the "business-as-usual" model is effectively out the window in terms of naval ship construction, as nearly a decade of consolidation of defense resources has effectively left the U.S. with two large companies — Northrop Grumman and General Dynamics — operating the shipyards that build most navy vessels. The latest acquisition has been the high profile pursuit of nuclear aircraft carrier and nuclear submarine builder Newport News Shipbuilding, which was recently concluded with its acquisition by Northrop Grumman.

While the oceangoing, deep draft fleet will undoubtedly remain the central focus of U.S. sea power, the winds of change have blown in hurri- cane style, as the powers in charge rapidly assess the current make-up and future needs of the U.S. Navy.

President George W. Bush, speaking at the Citadel in Charleston, S.C., said. "We have to think differently.

The enemy who appeared on Sept. 1 1 seeks to avoid our strengths and constantly searches for our weaknesses.

So America is required once again to change the way our military thinks and fights." Part of this change is already underway, with the current trial of high-speed, high capacity cargo and troop carriers from the Austal and Incat design stable, which have been well publicized in the pages of MR/EN and sister publication MarineNews.

Another significant move towards a smaller, more agile navy was in early November, when the Navy effectively threw out the DD-21 program and issued a Request for Proposal for the Future Surface Combatant Program, renamed DD(X). The DD-21 class vessel was put in peril long before September 11, as the awarding of the contract to ultimately design and build the new ships was delayed from the original Spring 2001 date as the new Bush Administration carefully reviewed all military assets, plans and future spending.

The new program seeks to receive a plan for a family of advanced surface combatants rather than a single ship class — effectively calling for more, faster and cheaper ships.

"Through DD(X), the Navy has charted a course to transformation that will provide capability across the full spectrum of naval warfare," said Deputy Secretary of Defense Paul Wolfowitz at the time of the RFP's announcement. "With the approval of this strategy, the Navy has defined its surface combatant roadmap for the future in a manner which ensures all maritime missions can be accomplished." said Navy Secretary Gordon England. "Through DD(X), we are taking a significant step toward providing improved combat capability for our Sailors and Marines." The DD(X) is in essence the new baseline of technology and defense for the U.S. naval forces, and is intended to provide a baseline for the development of a future cruiser, or CG(X), with the emphasis on common hullform and technology development.

Understandably, progress on the DD(X) program is expected to progress rapidly, with Spring 2002 scheduled as the timing for the selection of a new contractor.

Construction is likely to begin around 2005, with vessels set to enter the fleet several years later.

Despite the loosening of purse strings and an expected flood of money to purchase defense assets of every size, shape, and variety, the ASA continues to warn that spending is inadequate to meet the defense needs of the country. While the focus has shifted slowly but surely to smaller, more economical assets, the value of the large ship navy — or as Newport News Shipbuilding likes to refer to the nuclear aircraft carrier "90,000 tons of diplomacy" — cannot be overstated, particularly giving the size, scope and nature of the current war in Afghanistan. While American diplomats were quickly negotiating with surrounding countries for use of land bases for personnel, equipment and aircraft, multiple carrier battle groups were quickly assembling in the area, giving the U.S. sufficient force to act regardless of diplomatic endeavors.

Speed & Capacity: A Lethal Combination The use of wave-piercing catamarans (WPC's) for military purposes has fast gained momentum, and quickly resulted in a strategic marriage between INCAT and Bollinger Shipbuilding, Inc.. of Lockport, La. The joint venture Bollinger/INC AT. Inc. in October 2001, delivered a WPC. the 315 x 85-ft. (96 x 25.9 m) Joint Venture, to the U.S. armed services for testing.

The U.S. military has been looking for fast ships for rapid worldwide deployment of military assets, and according to Richard Lowrie, I neat's program manager for military applications, the U.S.

military is now more focused on "off-the-shelf" acquisition of commercial vessels meeting its requirements. "They were in the process of re-inventing the wheel." Lowrie said, in an article on the matter published in the December 14, 2001 edition of MarineNews, sister-publication to Maritime Reporter & Engineering News.

"High speed vessels have come a longway in the last 10 years, and I don't think they were watching the industry closely. It took the Jervis Bay's stellar performance in the East Timor crisis to get their attention." "These vessels offer tremendous deck space and deadweight," Lowrie said. "Any kind of equipment can be loaded onto them, including housing modules, helicopter or warplane hangars, tanks, armored personnel carriers, and shipping containers." According to Lowrie. the U.S. military's current objective is to be able to transport a battalion of troops and its equipment anywhere in the world within 96 hours, a division within five days, and five divisions within 30 days. "Our Cats hold the world record for the Atlantic," Lowrie said, "making the crossing in 70 hours, just short of three days. The speed and capacity of the Joint Venture can meet this objective with current technology." The design's astounding speed comes from four diesel engines developing 9,648 hp at 1,050 rpm, driving four Lips 150D waterjets via four Reintjes VLJ6831 gearboxes.

Chris Bollinger, CEO of Bollinger Shipyards, is confident that military orders will soon follow the Joint Venture's testing. "The Marines are testing (her) right now off the coast of Virginia. The word we're getting is that they're very impressed with the vessel. We know we can build them at a reasonable price — the design work is already done — so we expect military orders shortly." He sees the craft's versatility as a major drawing point for the military. "Any of the services, including the Army, Navy, Marines, or Coast Guard, can configure the deck modules to suit its specific purposes. The basic vessel remains the same. That way the vessel can be shifted from service to service as requirements change." The Joint Venture is actually the second WPC that the U.S. Marine Corps has tried. Last summer, the U.S. Marine Corps took the 331-ft.

(100.8-m) Westpac Express, built by Australia's Austral Corporation, on a two-month charter for transportation between U.S. bases in the Far East.

The Westpac Express was fitted with an 85-ft.

(25.9 m) articulated stern ramp capable of loading and discharging trucks, armored personnel carriers, and light tanks. At 41 knots top speed, the Westpac Express is slightly slower than Joint Venture, but the Marines were impressed enough to follow it up by chartering the Joint Venture.

I have never seen a ship like this. I'm impressed with the sleekness of the vessel, the shallow draft and cargo carrying capacity ... combined with the very high speed ..." In preparation for the charter, Bollinger/INCAT gave the vessel a major refit in September 2001, fitting it with military enhancements such as a helicopter deck capable of handling the large Seahawk and Sea Knight helicopters, stern quarter ramp, RIB deployment gantry, and troop facilities.

The craft emerged from Incat's Wilson, Australia, drydock capable of carrying 363 troops and 300 tons of military vehicles and equipment over 1,110 nautical miles at 45 knots, in an average condition of Sea State 3.

"There's no question that wave-piercing catamarans are the answer to high-speed, open-water transportation," Lowrie concluded. 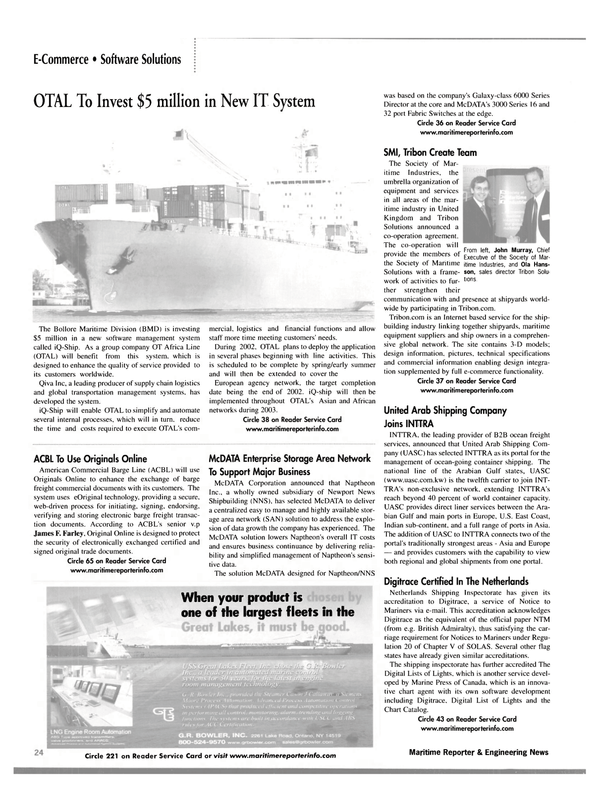