Wartsila, in conjunction with the Finnish research project SEATECH 2000+, has been developing some new machinery solutions for RoPax vessels. A promising concept is a semidiesel electric machinery, where mechanical propulsion is combined with a diesel electric power plant.

This new RoPax concept was presented for the first time at the Europort 2001 exhibition.

The RoPax vessel has a semi-diesel electric machinery featuring a diesel mechanical part driving a conventional CP propeller and a diesel electric power plant powering a contra rotating electric pod and the entire hotel load of the ship.

It is designed for high speed operation, able to maintain a service speed of over 30 knots fully loaded in most operating conditions. The RoPax is large compared to other high-speed ships and it has a gross tonnage of about 37,000 gt.

The superstructure, with day facilities for 2,000 passengers, is located in mid-ships leaving the aft end of the vessel open. The cargo is transported on two large car decks. Trailers and trucks are located on the main car deck, which has enough free height over the entire deck for high vehicles, and on the open aft part of the upper deck. The enclosed forward part of the upper deck is used for personal cars only due to restricted free height on the deck. The hull sides have a large flare angle to allow for an extra wide car deck while keeping the hull beam at the waterline level narrow.

This makes it possible to increase the car deck area and thereby the lane meters without any impact on the resistance. The enlarged car decks makes it possible to carry all cargo on two decks and no lower cargo hold has therefore been incorporated in the design. This allows for faster loading and unloading since no internal ramps are needed. The loading and unloading of vehicles is handled over the stern ramps directly to both the main and upper deck. Two level ramps are therefore needed on shore. This simple and fast cargohandling concept is in line with the high-speed philosophy of the proposed ship. The hull is of displacement type and features a very long and slender form with a single skeg in the center of the stern. The block and prismatic coefficient are optimized to offer the lowest possible resistance. The large flare angle of the hull sides gives a very narrow tanktop and engine room compared to conventional ships, which must be noted in the engine room layout.

All engines are equipped with common rail and SCR to reduce exhaust emissions, and the ship is designed for operation on HFO in order to keep the fuel costs low. The RoPax vessel features a propulsion solution with a contra-rotating FP propeller mounted on an electrical pod located directly behind a conventional CP propeller mounted on a single skeg in the center of the hull. This configuration offers much better hydro dynamical efficiency compared to a conventional vessel with twin screws on open bracket shafts due to the following reasons: • The rotation energy from the forward propeller is utilized in the aft propeller • Single skeg hull form gives lower resistance • More favorable wake field from the single skeg hull • Less appendage drag • No rudder • No shaft brackets • No stern thrusters (However, the pod gives rise to some extra drag, but not as much as that of the appendage in a conventional vessel) The propulsion also give rise to some other beneficial characteristics: • Better transmission efficiency • Lower total installed power • Good maneuvering performance Auxiliary systems The ship is equipped with a SCR unit for each engine to reduce the NOx emissions. The SCR units are located above the car deck to reduce the engine casing space demand on the car deck level. The exhaust economizers are located above the SCR units in order to keep the exhaust temperature high in the SCR unit. There are water traps below the economizers to prevent dirty wash water to fall into the SCR units. The central coolers and the sea chest are located in the same compartment as the large generators. The fuel handling equipment on the other hand is located in the compartment in front of generators. The oil-fired boilers (OFB) are located in the same compartments as the main propulsion engines directly aft of the gearbox. The OFBs have a capacity of 3,000 kg steam per hour each. The fuel consumption of the semi-diesel electric machinery is lower than that of both a diesel mechanical and a fully diesel electric machinery. This gives rise to lower operating costs. However, the capital cost is higher than that of the diesel mechanical alternative, but still much lower than that of the fully diesel electric alternative.

However, if the ship spends a lot of time in port, then the fuel cost will have relatively less influence on the total cost than the capital cost. In this case a conventional diesel mechanical solution, with low first costs, will offer the lowest total cost. The capital cost of the semi-diesel electric machinery is greatly influenced by the power ratio between the electrical and mechanical part of the machinery. This power ratio must be optimized on a project specific base. 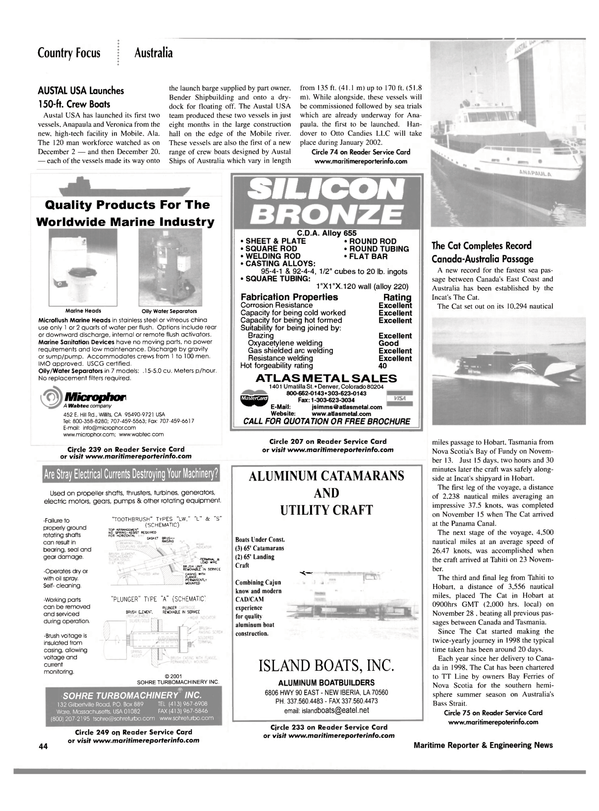