The christening took place at the quayside in Gothenburg and the vessel's godmother was Rosalind Simmons, wife of His Excellency Peter Simmons, High Commissioner for Barbados in London.

The tanker will be deployed in the Caribbean.

Like its sister ship Stena Caribbean, Stena Calypso is a high-safety vessel built for service in environmentally sensitive waters. The vessel is characterized by extremely high maneuverability thanks to stern propellers, which can be rotated 360 degrees, and a bow propeller, a double bottom and integrated steering and navigation instrumentation.

In addition, it has very flexible cargo intake — up to 17 different types of products can be transported simultaneously, including liquid gas in two ondeck containers.

During the vessel's christening, Lars Carlsson, president of Concordia Maritime — the Stena company responsible for the management of the Stena Calypso — said that the shipping company was following developments in the Baltic with interest. One assessment is that oil freight rates on the Baltic will double in the next five years. Considering the Baltic's extreme environmental sensitivity, C-MAX-type vessels would be very well suited for service in the region.

Stena is making major investments in the Safe Tanker segment. Last year, Concordia Maritime took delivery of very two large tankers built according to the same principle: Double safety, large cargo intake and a shallow draft. Carlsson also expressed concern that the stagnating freight market could result in yards focusing on building ships with reduced safety. Carlsson, who is the chairman of the international shipowner organization Intertanko, said that the organization intends to introduce an award, "The Environmental Challenge", to stimulate a safety philosophy in the industry. 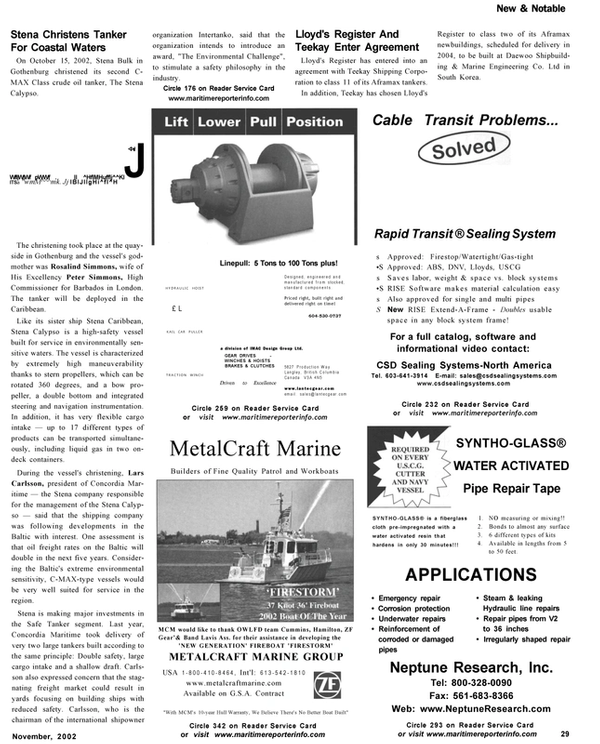