As the high seas continue to become potentially more dangerous, the increase in the amount of armed robberies and piracy attacks is climbing. Other incidences, such as stowaways on vessels are becoming all too common - causing a security risk, as well as a financial burden for owners. In order to relieve the pressures and dangers of these situations, Secure Marine has developed Secure Ship - a Ship Protection System designed to guard vessels against piracy attacks, illegal entrances and stowaways.

Based in Rotterdam, Secure Marine's (which is endorsed fully by the International Marine Bureau), product prevents these instances via three ways: Detection of a boarding attempt by warning the crew; scaring away boarders through very loud siren and flood lights; and prevention through an electrifying protection system.

Comprised of a collapsible electrifying fence that is placed around the vessel.

Upon entering the harbor or when a boat or barge must come alongside the fence — it is designed to be easily taken down. Divided into port and starboard zones, the fence can therefore be activated only on one side of the ship, while deactivating the other. This feature is particularly useful when the vessel is moored alongside in the harbor, and the master decides to de-activate the pierside while keeping the waterside active.

Futhermore, the fences have "gates," which allow temporary openings as required for pilots, gangways and liferafts.

A technologically-driven control system detects entry attempts and then transmits them to various output devices such as lights, alarms and sirens. Nonlethal high voltage gives off the effect that the vessel is virtually secure, while protecting the crew. If a power failure should occur onboard, the system will continue to detect intrusion attempts.

The Energizer system gives off high voltage peaks with a maximum of 9,000 volts, thus guaranteeing a non-lethal shock (the legal limit of 8 Joule), at the least amount of contact with the electrified wire. 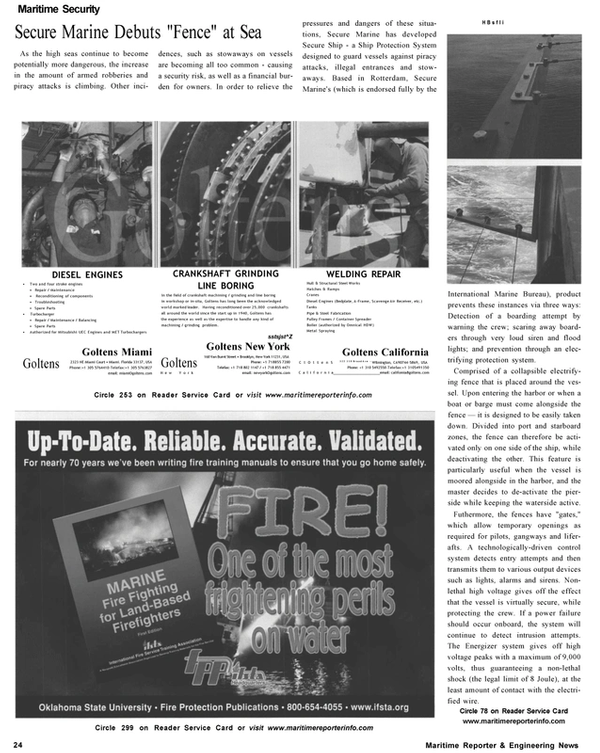