Kristiansand Fire Department received a new 32-ft. (9.7-m) Fast Response/Rescue Craft in August 2002, which was built by Innovation AS.

The Kristiansand Fire Department will use the craft for diving and rescue operations, pleasure boat fires, accidents and assistance, fires on the coastline/islands outside Kristiansand where access with fire trucks is impossible, and also as an ambulance as and when required.

Fitted with a single diesel engine, driving a single UltraJet 305 wateijet via a ZF Gearbox, the vessel, prior to delivery, underwent sea trials in Oslo Harbor with members of the Oslo Harbor, Police, Fire, and Ambulance Authorities being present.

A top speed of 36.8 knots at 5.5 tons was recorded on the GPS during trials, with an average both ways over a fivekm course of 35.5 knots. With top speed in light conditions just below 40 knots, excellent sea keeping characteristics were demonstrated with dry decks, good motion responses and tight turning circles during full speed, which were attributable to the UltraJet propulsion system.

During tender negotiations, noise levels were considered to be a very important factor for the rescue personnel and craft commander. They needed to be able to communicate with the base and each other from the time the alarm goes off until the accident/fire scene is reached. Noise level in the thermally insulated wheelhouse at top speed is around 70 dBa.

At the predicted 35 knots operational speed, the Fire Department can reach the border of their response area in 10 minutes.

Other equipment fitted includes a bow ramp for easy access on shore. Two large doors and a folding platform on the starboard side provide easy recovery of personnel from the sea, and a powerful Zenon searchlight fitted to the roof of the wheelhouse. 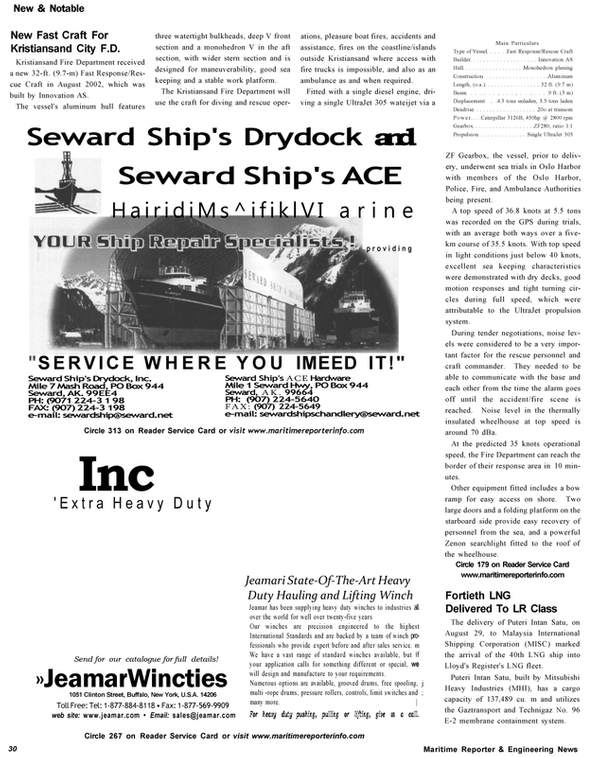