A New Generation of Fireboats

A new generation of fireboat hit the water this June. The NFPA Class 'C' 37- knot speedster exhibited speed, maneuverability and control. She had high pumping capacity and the ability to recover more injured survivors at one time than boats twice her size. This original design by MetalCraft Marine's Tom Wroe, had its concept drawing sketched on a napkin late at night after a long business dinner, where members of the Occoquan, Lorton, Woodbridge Volunteer Fire Department (OWLFD) added valuable operational input to the designer's pen. The procurement committee of OWLFD had spent two years educating themselves about what was available in the marketplace, including hull designs, propulsion alternatives, pumping systems and known sea rescue techniques.

They knew what they wanted, which was everything in a 32-ft. hull. Metal- Craft's design team calculated that the boat would not plane out with the extra weight of the fire system and emergency medical gear in a 32-ft. hull. The planing surface area or footprint of the hull needed to have sufficient area with a corresponding horsepower to get the heavy little boat on plane. Optimizing the boat's longitudinal center of gravity, the vertical center of gravity and the boat's meta-centric height were all important operational issues. The roof mounted monitor can put out up to 924 lbs. of force, seriously affecting the boat's righting moment when on the beam. This all meant the boat needed exceptional static stability. The resultant 36-ft. modified deep V hull shape has a moderate deadrise that when combined with its 27,000 lbs. of weight can easily knock down 3 to 5-ft. chop and maintained 20 knots in 7 to 8-ft. seas off the New Jersey coast on her maiden voyage.

The boat's weight also affects the boat's breaking ability. Because the jet intakes don't loose their suction when the nose dives during a 37 knot crash stop the boat can stop in one boat length, faster than any truck or car. The oversize Hamilton 322 jets deliver amazing maneuverability. The boat can move perfectly sideways, spin 360 degrees, or sit perfectly still on station with any combination of her three monitors operating at full rpm. The recovery deck can accommodate up to four survivors on backboards at any one time. When the recovery deck is completely loaded there is still approximately 5-in. of freeboard.

With the hull design being so radical MetalCraft sought the design capabilities of a reputed design firm. Band, Lavis & Associates of Annapolis, Md., completed a design review for Metal- Craft verifying MCM's calculations and design objectives. MetalCraft and specialists of the OWLFD developed a system that was essentially a firetruck system marinized and optimized for weight savings and pumping capacity. The result was 2,400 gpm of flow at 160 psi out of the Darley 1,500-gpm rated pump. Everything in the fire system was oversized, from the ZF transmission right through to the Akron nozzle. One of the keys to the system is the huge sea chest, large enough that a fireman could actually fit through the bottom of the boat when the flush bottom screen was removed. It was important that the sea chest intake did not disrupt waterflow to ensure that the the jet's efficiency was not reduced.

The next design problem was how to get all the extra gear in the engine room and be able to service all this gear easily.

Here, MCM's Tom Wroe used his own 300 lb. frame as the test article. All the floor grates, which are retained by spring loaded clamps, lift up to get to any gear below them. One Cummins mechanic was so impresed by the engine room that the dealership's owner had to come down and see it for himself.

When Firestorm left MetalCraft's facility in Kingston, Ontario, the boat had about 14 hours on it. The boat was leaving Kingston for a true endurance trial: 1,000 miles of canal, locks, and open ocean as she headed down the Erie Barge canal, through New York harbor down the eastern shore to her home on the Potomac just south of Washington.

She completed the trip in approximately 48 hours of running.

The Cummins 'C' series diesels and Hamilton jets purred the entire way, though they had just come out of the box. The OWL crew now had complete confidence in their new fireboat, Firestorm.

The boat surpassed all of her design objectives and attended her first boat fire the first week she was in service, she performed her first rescue while on sea trials at Kingston. Firestorm is a boat that both the OWLFD and MetalCraft Marine are extremely proud of and sets a new standard for high speed rescue/fireboats. 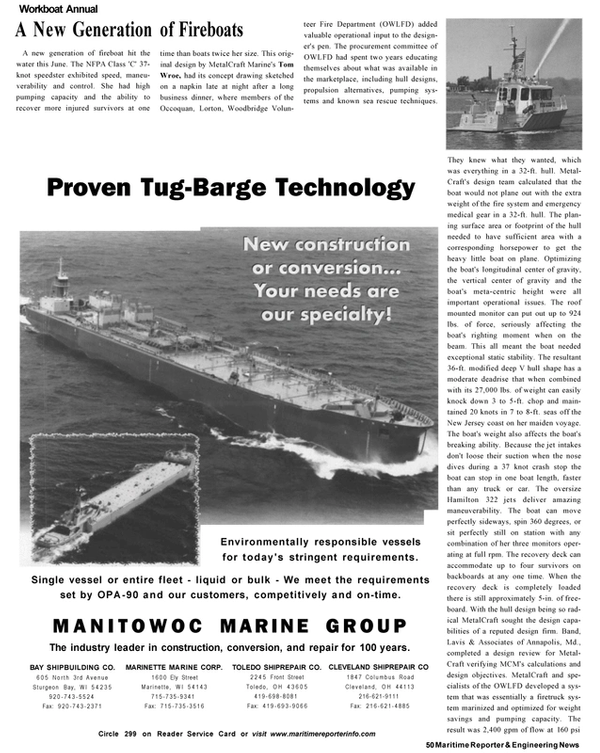 Read A New Generation of Fireboats in Pdf, Flash or Html5 edition of November 2002 Maritime Reporter