The 9,280 horsepower Ocean Reliance is the first of two tugs built by Marinette Marine Corp. for Vessel Management Services, a Crowley Maritime Co. The vessel is intended to operate as a tug/barge unit in conjunction with the 155,000-barrel tank barge 550-3. Construction engineering for the barge was also accomplished by Schuller & Allan LLC. The connection device is an Intercon Coupling system.

Earlier this year, Vessel Management Services, Inc. christened the first of four Articulated Tug- Barge (ATB) tank vessels that the company took in 2002, the 9,280-hp tug Sea Reliance and 155,000- barrel barge 550-1, built by Halter Marine. The barge 550-1 was built at Halter's Port Bienville shipyard in Pearlington, Miss., and the Sea Reliance at its Moss Point Marine shipyard, in Escatawpa, Miss.

The series is significant as it marks the first petroleum barge to be built under the ABS Safe- Hull program. "We are pleased to be the first company to build a petroleum barge under the ABS (American Bureau of Shipping) SafeHull program," said Tom Crowley. "Under this program ABS puts the vessel design through an exhaustive review process, which examines in finite detail the areas of the structure subjected to stress under dynamic conditions. The design is then modified to strengthen areas found to be less than adequate.

This up front engineering results in fewer out of service delays for the life of the vessel." "Halter Marine is committed to continue its positive impact on the Gulf Coast," said Anil Raj, COO of Halter Marine. "This project has provided jobs for more than 200 of the most skilled engineers and craftsmen in the shipbuilding industry." By the end of 2002, Vessel Management Services will have taken delivery of a total of four tug and barge units, two from Halter and two from The Manitowoc Company The series meets all SOLAS (Safety of Life at Sea) and ABS criteria, and has a foam capable fire monitor; twin fuel efficient, reduced emission electronic diesel engines; a noise reduction package and other upgrades to increase crew comfort. And the communication and navigation equipment is among the most technologically advanced in the industry today.

At ceremonies held at the Bay Shipbuilding Company in Sturgeon Bay, Wis., Molly Crowley, a director on Crowley's board, christened the tug.

More than 100 people braved a cold, rainy and snowy Wisconsin day to attend the christening ceremony.

"I am proud of the job the engineering and construction crews did on the design and build of this state-of-the art ATB," said Crowley. "We are confident that this vessel will provide many years of service to our customers on the west coast." "This occasion has been made possible as a result of the faith that Vessel Management Services placed in our Manitowoc Marine Group Companies," Pat O'Hern, Vice President and General Manager of Bay Shipbuilding Co. "From the shipbuilder's perspective, we are sending our creations off into the world of commerce." "Building the Ocean Reliance tug/barge was an excellent opportunity for two long-standing companies who are deeply committed to the maritime industry to work together on a high-profile project," said Terry D. Growcock, President and CEO of The Manitowoc Company, Inc. "It also afforded us the opportunity to showcase our multi-yard shipbuilding expertise by building the barge in Sturgeon Bay and the tug in Marinette. Being able to leverage the strengths of our workforce and facilities has resulted in an innovative vessel that will complement the reputation and heritage of the Crowley fleet for many years to come." An ATB has an articulated, or hinged, connection system between the tug and barge, which allows movement in one axis, or plane in the critical area of fore and aft pitch. 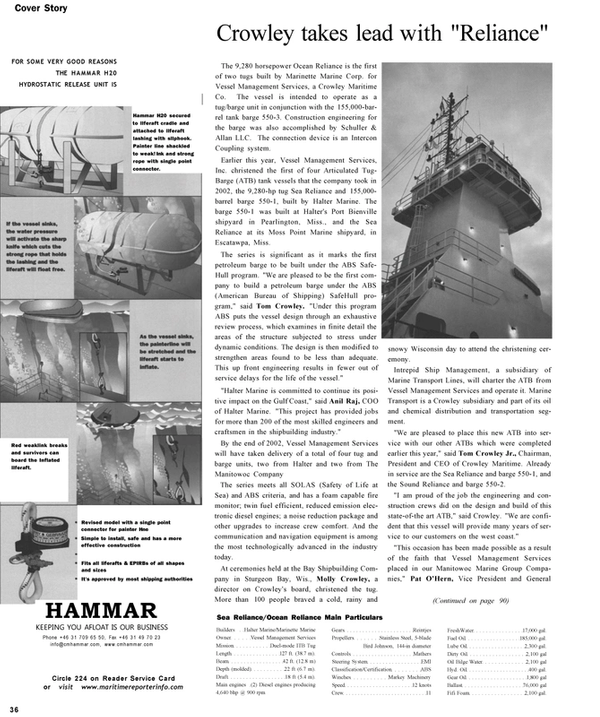