The 900,000-bbl FPSO Farwah, to be operated in offshore block CI37, 100 km offshore Libya, was launched at IZAR's Fene yard in October.

Construction of the FPSO 'Farwah' was started at Fene yard less than one year ago, after in mid-2001 Antwerpbased Exmar Offshore was contracted to supply the FPSO on a leased basis to CPTL and to manage production operations.

As regards 137-B, Fene is responsible for the design, engineering, and construction of the hull, as well as the engi- neering interface with the turret and topsides modules. It has also manufactured certain equipment items for the engine room and deck, in association with other IZAR yards in Spain.

As Project Manager Jorge Lopez Novo recalls, "We were first approached about this project in August 2000. At that time, Exmar was focusing on a conversion, at TotalFinaElfs request, although a newbuilding was also an option.

The harsh local environment necessitates strengthening of certain support structures. To aid stability, 197-ft. (60- m) bilge keels are being fitted along the vessel's sides. At the front of the vessel, a high bulwark will be installed to protect the deck from green water.

The work on the vessel is put forth via a team effort with IZAR Fene performing the design and fabrication of the 300-ton hydraulic power module, which is used to drive the offloading pumps; the yard in Cartagena, southern Spain, fabricated the power plant's 3 MW diesel generators; IZAR Manises in Valencia built two, 30-ton cranes for the deck, while Fene built and designed the helideck and accommodation area (enough for a crew of up to 52) and the 30-m flareboom.

Partners in the development of the offshore block CI37, known as the B structure, are TotalFinaElf, Germany's Wintershall, and Libyan National Oil Company (NOC) with the balance. TotalFinaElf affiliate Compagnie des Petroles Total Libya (CPTL) is operating the project, which is based in 83-87 m water depth, 100 km offshore western Libya. 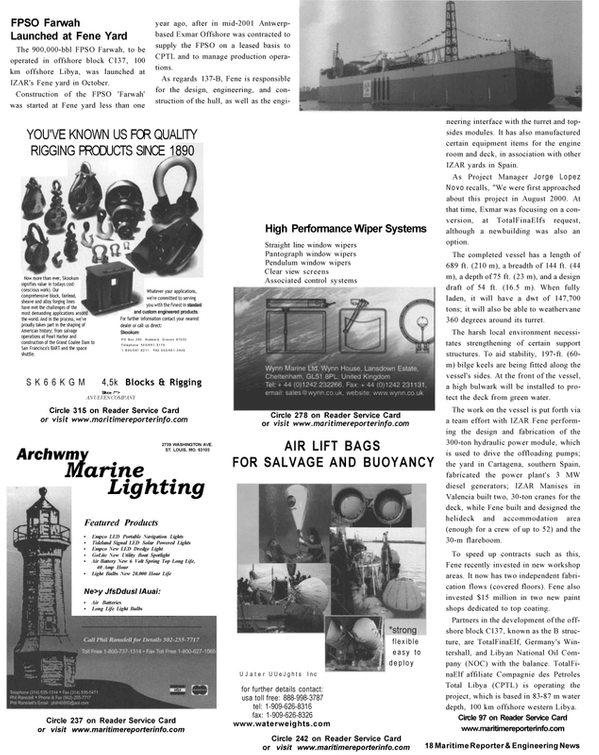