MTU Series 2000 and 4000 engines have recently been optimized for the requirements of inland shipping, a development that might not bode well for makers of engines used to dominating this niche away from the MTU brand.

Since being launched in the year 2000, the new series of engines, which are available in 12 and 16-V versions, have had excellent continuous duty records, according to the manufacturer. Subsequently, MTU broke into the inland shipping market with its high-speed, heavy-duty engines. The company also prepares the Detroit Diesel Series 60 in the 300 to 350 kW range for the German and European markets.

They have proven their worth as prime moves for inland ships in the power range between 400 and 1,760 kW, and the range of application extends from 80-m long container and bulk-cargo barges to cruise ships.

The Series 200 engines are available in 8-, 12- and 16-V versions. For the powering of commercial vessels, the engines cover a power output range from 400 to 800 kW at 1,800 rpm. For use on inland ships, the engines have been optimized. For example, MTU has reduced the consumption figures through improvements in the combustion process.

Also, MTU has made the engines more robust and durable with new highpressure injectors.. In addition, the engines have been optimized to deliver significantly higher torque and to accelerate more easily in the lower and medium engine speed ranges.

Last year, MTU sold 1,700 engines from this series, including 500 to power ships. Technical innovation on the 4000 Series has focused more on the reduction of lube oil consumption, which is now only 0.3 percent of the standard fuel consumption. This was made possible by re-optimizing the interplay between piston, cylinder liner and piston rings.

Series 4000 engines are four-stroke diesel engines with direct fuel injection, exhaust-gas turbocharging and chargeair cooling, 4.06 liters displacement per cylinder, a bore of 165 mm and a stroke of 190 mm. 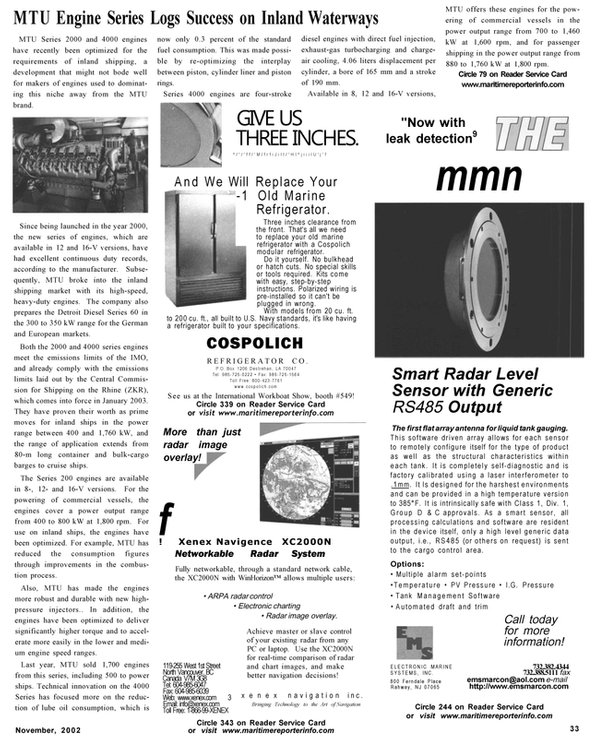