The actual extent of European public funding to promote a modal shift from road to waterborne transportation has up until now — been far outweighed by political discourse on the subject — no doubt designed to appeal to the popular, environmentalist vote. However, a recently more pragmatic approach by government to the issue, coupled with the maritime industries' development of new technical solutions for efficient, intra-regional freight exchange, suggests that the tide might be turning in favor of short-sea shipping.

An appreciation that economic and environmental considerations are increasingly intertwined, and that environmental performance bears more and more on competitive position, colors new initiatives on the part of both industry and more enlightened or commercially circumspect governments.

The need to act is urgent. On current forecasts, movement of goods by road within the European Union is projected to grow by around 40-percent up to 2010. In an effort to lessen some of the expected downsides of such growth, with its implications for congestion, pollution and accidents, the EU has formulated the Marco Polo aid program. This has been designed to give financial support to projects judged to potentially improve Europe's freight transport system from an environmental perspective.

The Marco Polo initiative provides an important backcloth to a new, Anglo- Spanish project, which blends highspeed vessel design and construction know-how with powering arrangements based on the latest marine derivative of aero gas turbine technology. Acknowl- edging the preoccupation among shipping service operators with running costs and dependability, the accent in the development of the European High- Speed Cargo Vessel (EHSCV) concept by IZAR and Rolls-Royce has been on operating efficiency as well as reliability, besides power density.

There have been quite a number of innovative, fast freight carrier design proposals over the past couple of years.

However, new investment in high-speed solutions over this period has been largely concentrated on ferry design families and shipbuilders with an established track record in the field.

Through legacy company Bazan, IZAR's experience in building three Mestral-class monohull ferries of 35 knots, plus the 40-knot monohull Alahambra, and a 57-knot B60-type catamaran, stands it in good stead. The proposed 37-knot EHSCV, embodying all- high tensile steel construction in preference to the aluminum structures used before, offers a payload equivalent to 1,700 lane-m, or 124 trailers, with a length of 692 ft. (211 m); breadth of 72 ft. (22 m); and draft of 15 ft. (4.7-m).

The MT30 gas turbine scheduled for commercial release by Rolls-Royce in early 2004 is central to the proposition.

Two such units, rated for the application at 32,000-kW apiece, and fuelled by marine diesel oil, would drive two or four Rolls-Royce Kamewa wateijets.

Prototype testing of the MT30 started in September this year at Rolls-Royce's Bristol premises in the U.K. Since the machine has 80-percent commonality with the Trent 800 aero engine, its pedigree is impressive. The Trent 800 has logged more than 2-million flying hours since service entry in 1996, and is claimed to have achieved a 99.9-percent dispatch reliability. The question now is whether the MT30, will be viewed as a viable powering option by the marine market.

Certainly, though, the figures for the EHSCV design are appealing. Relative to road transport routings, and with reference to the EU's own calculations of road freight costs per km., IZAR and Rolls-Royce say that the new-generation freight carrier will be competitive for routes over 300 n.m. Early feedback from operators has been such that consideration is already being given to a possible version of the design incorporating overnight accommodation for a limited number of truck drivers.

Under the Marco Polo program, subventions of up to 30-percent can be made towards operating costs over three years for approved projects, while startup grants are available for schemes involving two or more member states.

The aid can be additional to individual member state support.

IZAR's commitment to the ferry sector as a whole is clear from its ongoing involvement in construction of full-displacement vessels for the international market, in its research and development work, and in its endeavors to resume production in the commercial highspeed field. Besides the EHSCV, its current offering to the high-speed market includes a Pentamaran RoPax design formulated in cooperation with the British technical consultancy Nigel Gee & Associates (NGA).

Lifecycle Toolset Shipbuilding market demand for software tools, which can bring about true integration between the various disciplines and processes, is driving the development of a new generation of computer-aided design (CAD) systems.

Many shipyards cite shortcomings in the functionality of CAD-based technology used today as a barrier to concurrent engineering, while the lack of a common information base inhibits improvements in design workflow and ship lifecycle processes.

Breakthrough technology championing a data-centric, integrated 3-D modeling approach encapsulated in Intergraph's new IntelliShip software is claimed to surpass current CAD-based solutions. One of the most important facets of the package is its ability to address conceptual and detail design of ships and components, in addition to plan approval, production planning, manufacturing, construction and risk management, giving credence to its description by its American developers as a "lifecycle toolset." Whereas "traditional" CAD systems can answer only graphic-related questions, IntelliShip's fully-integrated approach provides a basis for cost calculation.

"The (shipbuilding) industry's productivity is tied to, and limited by the use of traditional CAD technology, which is expensive to implement and maintain," contends Intergraph, adding that "Lack of integration prevents the efficient transition of early design to downstream detailed design, and increases manhours and cost due to rework. It can also place the shipbuilder over budget by the time the contract is awarded." To reduce man-hours, the software permits high-level design decisions to be propagated automatically to detail parts, while the rule-based automation it incorporates eliminates repetitive operations in detail design. By obviating many of the sequential dependencies of the traditional design process, Intelli- Ship is intended to cut design, procurement, fabrication and construction times. At the core of IntelliShip is its Product Model Database structure, providing full access to engineering data, capturing graphics and associated information as well as design intent. The database is a shared, common repository for all ship design, construction and management information.

Due for release early next year, IntelliShip has been formulated by the process, power and offshore division of Intergraph with the assistance of Global Research & Development Company (GRAD), a U.S.- headquartered consortium of international shipbuilders. As part of a five-year pact signed by Intergraph with Oslo-based Det Norske Veritas Software, relating to software for the shipbuilding, offshore and process industries, products built on IntelliShip technology will be resold by DNV Software into the shipbuilding market. These will constitute part of a broader suite of systems marketed as the DNV Software Marine Solution.

Intergraph is a leading vendor of software and associated services in the process and power generation industries, and also has a stake of around 35- 40 percent in the offshore sector. Intelli- Ship signals the U.S. firm's ambition to capture 40-percent of the shipbuilding market within five years.

Under the terms of the long-term deal signed with Intergraph, DNV Software will also integrate DNV Nauticus and IntelliShip applications, and collaborate with the US company in the offshore oil and gas and process sectors. Meanwhile, the GRAD consortium is testing Intelli- Ship on ship design and production projects at member company yards in Europe and Asia. 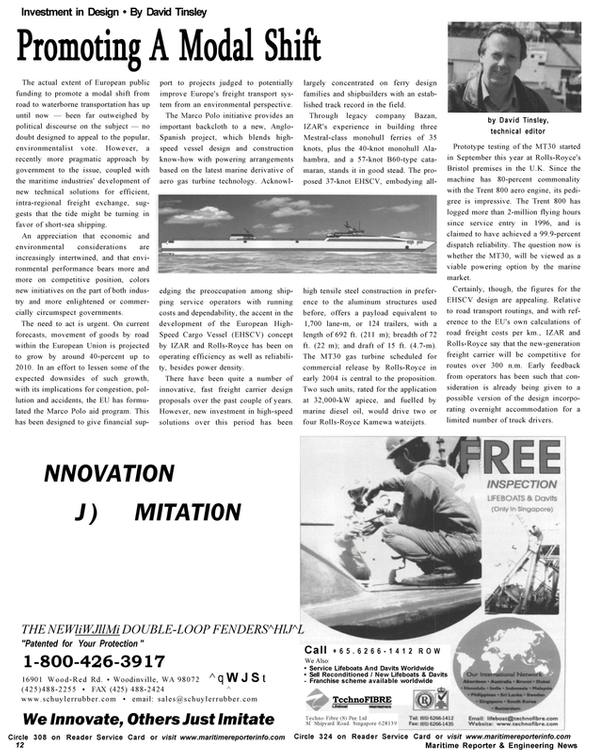